Astrophysicist Tracy Garratt gave up a successful career in HR to return to education in her mid-30s having felt discouraged from pursuing physics at school. Now studying a PhD at the University of Hertfordshire, she’s balancing exploring 10-billion-year-old galaxies with being a new mum. 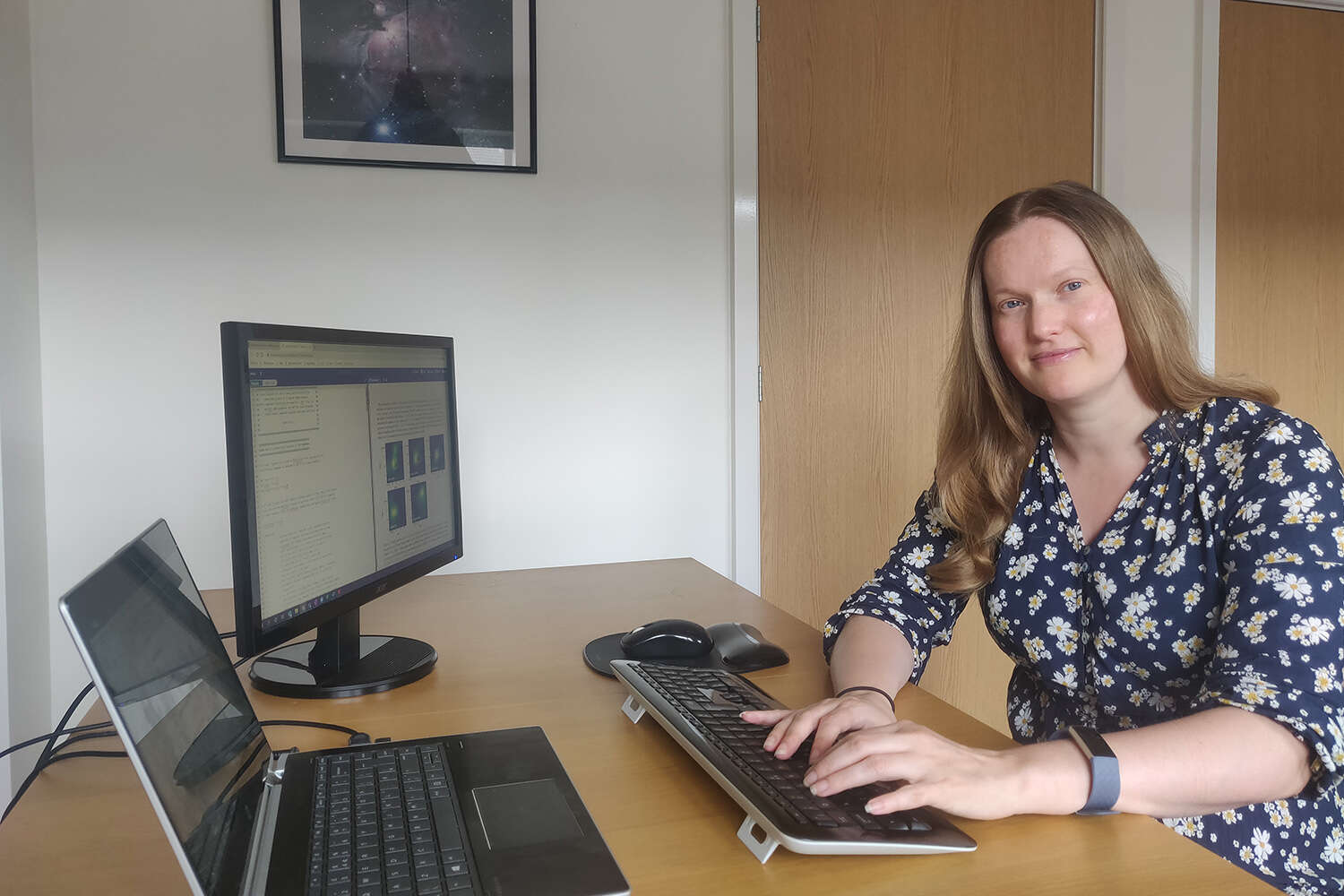 "The scholarship means I can go back to my PhD full time. It means we can afford childcare for my daughter. The scholarship's taken that pressure off, so I can now enjoy the PhD – but also enjoy time as a family."

Tell us about your work - and what drives you
Stars are made of molecular gas, primarily hydrogen, and what I’m studying is how the amount of molecular gas in galaxies has changed in the last 10 billion years. The history of star formation is well understood and it’s generally accepted that around 10 billion years ago galaxies were making more stars than at any other time in the history of the Universe. What we don’t know is why. Was is because there was more star making material (molecular gas) in galaxies at this time or were galaxies just more efficient at making stars? We want to know what's special about this period.

In our work we’re measuring the amount of submillimetre emission coming from galaxies, this is a slightly longer wavelength than infrared. We can use this measurement to calculate the amount of dust and then use a dust to gas conversion to work out how much gas there is in these galaxies. So far, the largest sample of galaxies that have been used to measure molecular gas mass is 1,500, which is not many in the context of the billions and billions of galaxies in the Universe. We're looking at a sample of 150,000. Still not that many – but it's a factor of 100 more, so the idea of being able to expand on these previous studies and actually add something to this area is very exciting.

What drew you to this area of physics?
I did a Masters at Manchester on a type of galaxy commonly known as submillimetre galaxies, which are dusty star forming galaxies – and they're just a really fascinating topic. This type of galaxies were only discovered in the 1990s. It sounds strange to talk about dust in the context of the universe, this is not dust in the sense of what we wipe off our windowsills, it's more like soot.

A lot of these galaxies were hidden from view because dust blocks ultra-violet and optical light. These galaxies make a lot of stars.  When the stars emit ultraviolet light it's absorbed by the dust and then re-emitted in infrared.  So these galaxies are really bright at infrared and submillimetre wavelengths. Once we got submillimetre telescopes and infrared telescopes we could finally see them.

These are exciting galaxies, because they’re rare, making loads of stars and their population peaked in number around 10 billion years ago. That's why I’m so interested in this time period, and why I wanted to continue to focus on it for my PhD. It's quite cool when people ask what you do and I can say that I'm looking at galaxies that are literally far, far away!

What first got you excited about physics?
I think it's the traditional story in the beginning, because as a kid I loved physics and we lived in Manchester, so I used to go to Jodrell Bank to see the Lovell Telescope. Back then they had a planetarium and I used to go with my dad. I was always just really interested in space.

I did cosmology when I was at college but I was put off from doing physics because I was a girl. I'm a bit older, I went to college in the 90s, and I was one of only a handful of girls in our physics class. Our teachers didn’t encourage us and no-one told me what I could do with a physics degree, so I did human resource management and philosophy at university because I thought I'd better do something sensible that would get me a job. The philosophy was not the sensible bit!

When I graduated I really wished I'd done physics, but by then I had student debt, rent to pay and I just couldn't afford it. So I waited until I was a bit more financially stable, and then I did a physics degree through the Open University, in the evenings while working full time. I did it over six years and used pretty much all my holidays to do exams.

It was intense. To succeed at a degree through the Open University you have to really want to study that topic. Fortunately, I loved it!

After I finished university I decided to quit my job – and that was a very difficult decision because at that point I was in my mid-30s, married, I'd just got a mortgage, had a good career. But I thought I either do this now or I'm never going to do it. So I quit and did my Masters at Manchester.

What is it like being a woman in physics? What challenges have you faced?
I think the main challenge early on in my life was being put off from doing physics, having teachers who just weren't encouraging you, as a girl, and constantly being told it's too hard. The second challenge was making that decision to come back to university, to give up my career, knowing I would be so much older than other students and, as a women, still in a minority.

I still struggle with confidence – I think I'm not good enough, my maths isn't good enough, I worry that I’m going to make a mistake, that people are going to see me as an imposter. Coming to it as a woman it’s amplified, because you look around you and everyone else is a man.

You hear quite often from women that being a postgrad just doesn't fit with family life. I want to show that, as a mum, you can do it. I'm lucky because my supervisor is a highly accomplished female astrophysicist with two children, and so she's a great example.

What does winning the scholarship mean to you – and what difference will it make?
It’s incredibly helpful. We've just had a little girl and it was now or never with that because I'm 39 now – but it was also now or never with this PhD. It’s a lot to balance.