Thornton Tomasetti Defence Ltd is a multidisciplinary firm of consulting engineers who provide expert advice on structural survivability, blast, ballistics and weapons effects to the UK Ministry of Defence, other UK government departments, and the US, Netherlands, German, French and Canadian Navies as well as global defence companies and suppliers.

Understanding the ability of modern warships and their weapon systems to withstand underwater weapon attacks is a key feature of Thornton Tomasetti Defence Ltd's design. 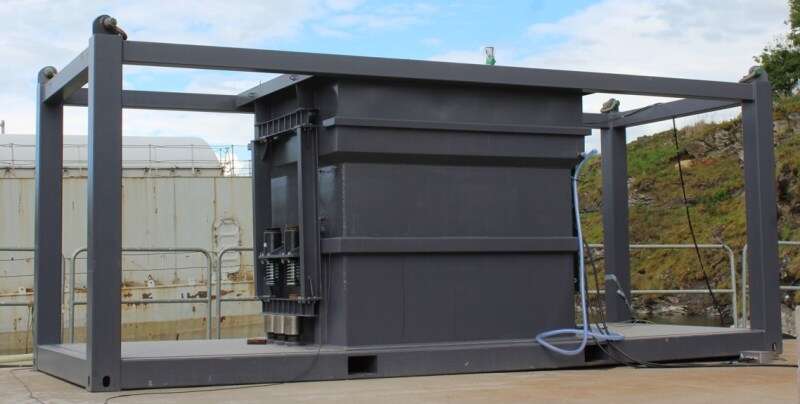 The testing of ships and equipment against underwater shock is fundamental to that understanding, and whilst the techniques for testing ship structures, equipment and systems are well understood and regularly practised the same is not true for weapons and munitions.

Whilst the theory is essentially the same as for normal ships equipment the potentially explosive consequence of a failed test means that testing of live weapons has been restricted to only a very small number of types, and then only in extremely expensive bespoke test environments.

This means that the understanding of response to shock is a significant unknown for the vast majority of weapon types. This is not only an issue for the United Kingdom, but also across the world.

Recognising the need for an alternative type of test, Thornton Tomasetti has developed a highly innovative, patented alternative system of shock testing live munitions based on a deep understanding and application of physics principles coupled with a thorough understanding of the engineering requirement.

The development of the JASSO airgun-driven shock-test machine is revolutionising the conduct of live muniton tests by delivering an essentially disposable shock-test machine that replicates the shock environment experienced by a ship and its weapons following an underwater explosion from a torpedo or mine.

The availability of this machine means that the shock performance and hence combat safety of the UK's inventory of maritime weapons, and other munitions embarked in warships and auxiliaries, can be determined and understood in a cost-effective and safe manner.

The development of the JASSO portable, airgun-driven concept has revolutionised live munitions testing in the UK which will significantly improve combat safety of RN warships and sailors.