For the launch of our Limit Less campaign, we asked our Qubit readers – 16-24-year-olds currently studying physics at school or university – to share, anonymously, any experiences of being discouraged from pursuing physics. These extracts are just some of what they had to say.

Do you have a story to share? Tell us now! 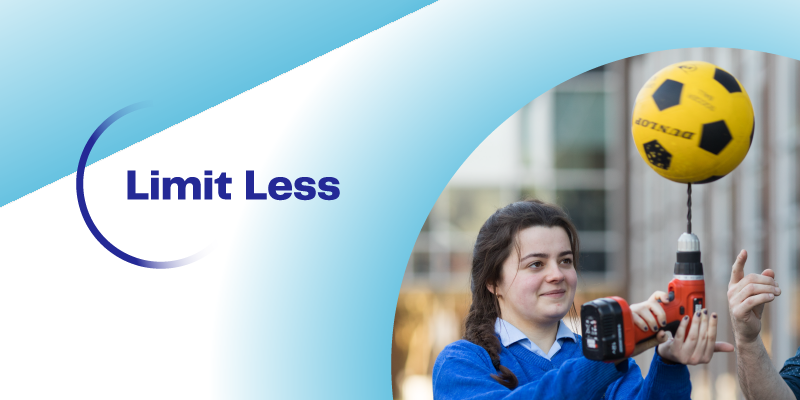 "I quickly realised that I didn't know anyone working in a STEM field except my GP or my dentist. I didn't know anyone who looked like me, I couldn't name you more than two people who weren't white… I was deeply discouraged by my physics teacher, who actively worked against me and other students of colour – always telling us that physics was meant for those who were white and male as apparently this is 'their' industry."

“Being a girl, I think there's a default discouragement from physics and most STEM subjects even if no one directly tells you not to take physics. For me, this mainly comes from the complete lack of female role models in the area. How many of the Nobel Prizes for physics have been men? On a smaller scale, discouragement can even just be being the only girl in your physics class.”

“I am the only female A-level physics student in my school… This feeling of being seen as “other” made it difficult to make friends so I didn’t have anyone I could discuss the work with or partner up with for practicals. I also felt pressure to speak up whenever someone said anything sexist or homophobic as I knew no one else would, which was exhausting. Luckily, my physics teachers are really supportive. They encouraged me at GCSE to take part in events, like the British Physics Olympiad (BPhO) and work experience, which made me choose to take it at A-level.”

“Outside of the classroom my friends and family are incredibly supportive, and my teachers have always been encouraging, however sometimes I feel alienated by members of the class. Many of them also use homophobic language when talking to other students, which is uncomfortable for the few LGBT members of class, including me.”

“I am autistic, which may explain why I was passionate about maths and physics from a young age. I was bullied for it… [My] school based its teaching model on student-to-student learning. This meant I was often the only girl in the group. I was ignored, ridiculed and dismissed. The boys also had graphic conversations about sex and porn that made me incredibly uncomfortable and turned the classroom into a hostile environment… Luckily, I decided to leave the sixth form in year 13. I had a great experience in year 13 at my new school. I got A*A*A* in physics, maths and further maths.”

“At the beginning of year 9 I noticed a shift in attitudes from peers towards choosing subjects for GCSE... I faced the all too common criticism of ‘why would you take that, you’re a girl’ to being told ‘you’re a dumb blonde’, which resulted in me dramatically changing my hair colour to black … It saddens me how there is a lack of girls taking up physics studies but through being a spokesperson for our physics department on open days and running an online study platform, I’m trying to encourage more girls to consider physics!”

“I would get higher grades than my male peers in assessments and homework yet if there was something I didn’t understand they would ‘mansplain’ and make me feel like an idiot. Also in my physics class there were only five females (and around 15 males) and our teacher would call the girls the remedial group and ‘team fake tan’ which made us feel more isolated from the rest of the class.”

“I went to an all-girls academy for high school, so I was always encouraged to study STEM subjects. However it meant a shock when I went to a mixed sixth form where the girl to boy ratio was about 1:5 in physics. I was not used to some of the reactions when I spoke up in class. I overheard comments about how I should be quiet and I was interrupted midway through answering about what I ‘actually meant’. This never happened to boys who answered more frequently than me.”

“As a female from a working class background who had an extremely negative secondary school science experience, and is starting university amidst a pandemic, I would encourage everyone that it is absolutely possible to achieve your dream and pursue science regardless of obstacles!!”

“I find it difficult to place specific moments where some have blatantly said I was unable to study physics as a girl. I think physics specifically has a culture other subjects don’t, the sense that you have to be a genius to study it. Despite consistently getting A*s in my physics GCSE work… I thought I wasn’t good enough to do A-level, and didn’t have much in common with the type of boys who seemed like they liked it so much more than me.”

“Physics has always been one of my favourite subjects from the beginning of high school and it is currently my subject of study at university. However, there have been numerous incidents that made me question whether I should pursue it. One of the things that stands out is that there is almost never anyone who looks like me in any events I attend or even my classes. This often means that my peers’ first question to me is if I'm in the wrong place… there is a real lack of ethnic representation of females.”

“As a woman with bipolar disorder, I am quite an emotional person. In secondary school I was constantly put down and taunted for being the way I am by teenage boys who belittled me, talked over me, and made me feel like my opinions were worth nothing and that in turn I was too… In addition, in GCSEs studying physics, as I am a lesbian I was called a 'dyke' and other slurs and was led to believe that I wouldn't fit in in physics because I'm LGBT.”

“When choosing my A-level options, I was told by my mum that I shouldn't be studying STEM subjects as girls shouldn't be doing science, and should stick to English and arts. As well as (according to her) it not being for girls, I'm also not smart enough for it and would be wasting my time. However, I knew that my heart was in science so I ended up doing maths, physics and biology at A-level. I just got a grade A in physics and am now off to study physics at university!”