Ramneek finished sixth form this summer, having studied physics, maths and further maths – only for her exams to be cancelled because of the pandemic. It was the latest in a succession of cruel setbacks in her education. Here she explains how her visual impairment made school a constant struggle and how she’s had to fight for her rights every step of the way. 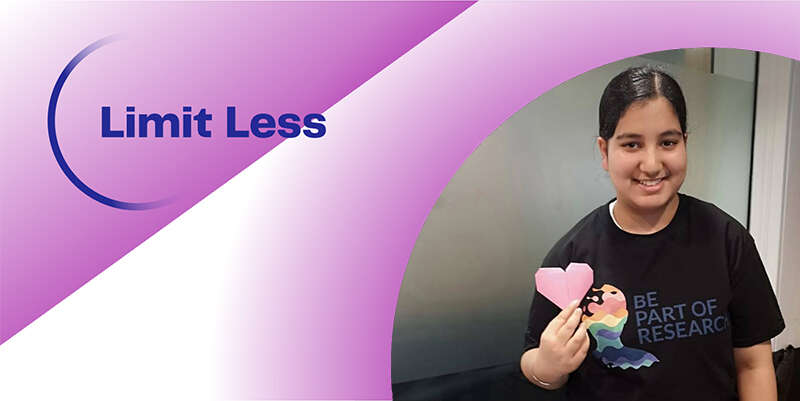 As a visually impaired student, I cannot begin to explain the number of challenges I have had to face at school, from primary through to sixth form. I don’t want any other student with a disability to go through what I have.

I was diagnosed with optic glioma at the age of four – it’s a type of brain tumour that sits on the optic nerve. My parents realised something was wrong when my twin sister was able to pick up toys from the floor, but I couldn’t always see where they were.

I was five when I began chemotherapy and was in and out of hospital, which meant I was in and out of school. It stabilised, but a few years later it came back and when I was ten I had to go through radiotherapy. Primary school was actually pretty good because the school was so supportive, but it was hard to make friends when I had so much time off.

I have no peripheral vision on either side, so I have to turn my head to see around me. I also cannot see at a distance. I have glasses, but if I see a blur then all they do is make that blur bolder. Whiteboards in classrooms are a big problem and looking at screens for a long time or reading small print gives me headaches.

Over the years I’ve found ways to adapt – and I have never let my vision get in the way of my learning.

I love physics because I love solving problems and understanding how things work. I love seeing how theoretical concepts are applied to real life. When I finish university I want to work for a company designing products and apps that can help people. And you can’t have design without physics!

I have had to work much harder than most of my peers to get where I am today. There are a lot of things that could have put me off, but the one thing that I have learnt is that being visually impaired has made me a much stronger person. There will be many hurdles to jump but if you have a passion for something, then you should pursue it.

When I started secondary school it was a big shock, as I went to a 12 form entry school where there was very little understanding or support for someone like me. I got given detentions for talking in class when I asked my peers what was on the board. My impairment was never taken seriously and in most classes I was given A5 worksheets with 6-8-point font size when I should have been given enlarged A4 sheets with 16-18-point font.

At GCSE I got to do triple science, which seemed great at first, but I never got the support I asked for. Mock papers came unmodified, with tiny diagrams and unreadable text. I struggled for two years and then, when the real exams came, it turned out the school had ordered the wrong papers for me. It was an absolute nightmare and the worst day of my life.

I was so fed up that I decided to change to a different sixth form – but the problems continued. Not once, in my entire secondary school education, have I received all the correct modified exam papers. In fact, to this day I don’t have a set of results that accurately represent my true ability in physics and maths – not because I haven’t revised, or because I didn’t know the answers, but because I haven’t been able to see the questions. So how can anyone predict my grades?

It meant that everything for me was resting on my final A-level exams. When I received the wrong mock papers the school’s response would be, “Don’t worry, this will never happen in the real exam.” But because of Covid, I never got to find out.

On results day, my teachers’ calculated grades meant I lost my dream place at Imperial to study design engineering. I got so close, but I had to scramble to get into a university through clearing. Thankfully, I’ve just started my first year of engineering at City – it’s not my ideal course, but it has a design module.

While I have had to face many struggles, there have been some positives that I am very proud of. At the end of year 12 I was awarded the certificate for excellence in physics and was also given the opportunity to lead a team in a national physics competition. It was a lot of hard work, but we did really well and received a golden CREST award. I also applied to Cambridge, passed the entrance exam (for which they managed to enlarge the print perfectly), went to interview and was pooled. I didn’t get in, but Imperial was always the goal.

It has not been an easy journey. But my advice for all visually impaired students is that if you have a real passion and love for physics, please don't give it up. Even if I didn't have a visual impairment, having a good or bad teacher is just pot luck. Don't let anyone tell you that you can't do it.

Seek support. There's a lot out there that I wish I'd known about earlier, but I'm glad I’ve found them now. There are groups you can meet people through that can help you see that you’re not alone. Finding these communities has really helped me gain my confidence back.

You need to speak up. You have the right, just like everybody else, to do what you want to do. Just because you're visually impaired, or because the person next to you doesn't understand what it means to be in your shoes, doesn't mean you're not supposed to be there.

So my message to you all is that while things may seem really tough at school, just keep persevering and pushing those boundaries – because you can do this too.