Physicist Julie Bellingham has designed a physics-themed garden for this year's Royal Horticultural Society (RHS) Malvern Spring Festival (9 to 12 May). Funded by an IOP Public Engagement Grant, the garden aims to help raise public awareness of, and engagement with, contemporary physics.

Physicist Julie Bellingham has always had a passionate interest in garden design and in 2017 she decided to take a break from her job at the Science and Technology Facilities Council and study to become a garden designer.

Julie, who wrote her MPhys dissertation on redshift and has a PhD in secondary ion mass spectrometry, graduated top of her year for garden design in 2018. Her show garden, the Redshift Garden, represents the astronomical phenomenon of redshift and celebrates the use of telescopes to help us understand the universe. It was chosen as one of eight show garden designs for the RHS Malvern Spring Festival.

So what is redshift?

When you look at a star or galaxy through a telescope, there is a good chance that it will appear more red than it actually is. This is because the universe is expanding which stretches the wavelength of the light, shifting it towards redder hues.

Although not as common as redshift, a blueshift happens when an object is moving towards us, such as the Andromeda galaxy.

The light waves appear compressed and would mostly come from the blue end of the spectrum.

Inspiration for a redshift garden 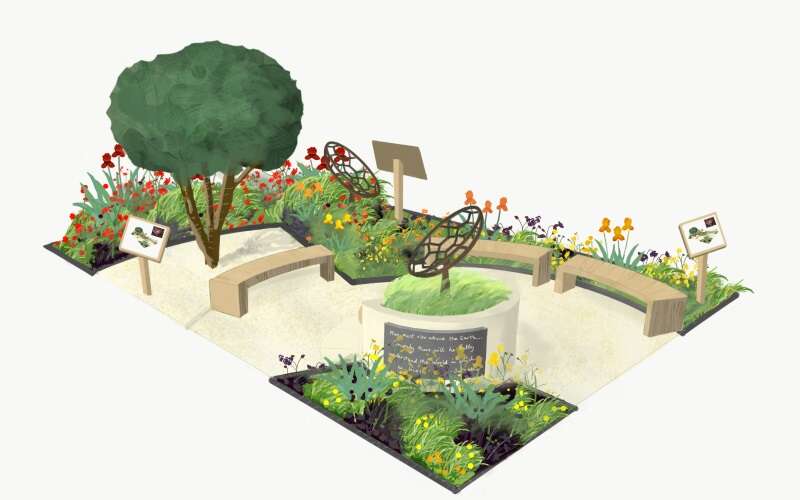 Julie felt inspired to represent redshift in a garden design: “I did an essay on redshift for my masters before I did my PhD. It’s always been something that’s excited and interested me, and the colours in redshift are lovely for a garden – yellows through to oranges and reds interspersed with black.”

Visitors will be able to sit on a circular seat which represents Earth, and look out onto layers of yellow, orange and red plants.

Beyond the plants will be a gravelled area representing the parts of space yet to be explored, with two steel sculptures depicting space telescopes.

Bringing together science and art

Visitors to the garden will have the chance to chat to volunteer scientists from Manchester, UCL, Leicester and Birmingham and learn more about the science behind the garden.

The IOP is delighted to be sponsoring Julie's redshift garden via the Public Engagement Grant Scheme. The scheme aims to raise public awareness of, and engagement with, contemporary physics.

"Julie’s project captured our imagination as a creative way of engaging people with physics and astronomy through their interest in gardens” said Johanna Kieniewicz, Head of Outreach and Engagement at the IOP.

Julie is looking for a permanent home for the garden, but you can book tickets to visit it from 9-12 May at the RHS Malvern Spring Festival.