For fundamental achievements in quantum thermodynamics, metrology and cryogenics based on nanoscale electronic devices. 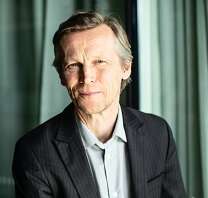 In 1982 he completed an M.Sc. in technology (physics) at the Helsinki University of Technology (HUT), now Aalto, and in 1984 gained his doctorate with a thesis on critical flow and persistent current experiments in superfluid helium-3.

He continued his work on the superfluid with a postdoc in the physics department of the University of California, Berkeley, followed by a return to HUT to a position of group leader in the low-temperature laboratory.

In 1992 Pekola moved to the University of Jyväskylä, co-founding the first nanophysics laboratory in Finland, and joining the faculty in 1995. His new research programme in the physics of nanoscale devices has led to many breakthroughs and landmark results.

He returned to Helsinki in 2002, where he is now full professor of quantum nanophysics at Aalto. There he founded the PICO research group in the low-temperature laboratory which he heads to this day.

He was awarded the Theodor Homén Prize by the Finnish Academy of Science and Letters in 2016.

For pioneering transport measurements at high magnetic fields and low temperature in heavy-fermion and cuprate superconductors.

Taillefer made pioneering contributions to the field of unconventional superconductivity, using a number of powerful experimental techniques at low temperatures.

For fundamental contributions to the theory of quantum transport processes in superfluid 3He, heavy fermion superconductors and disordered metals.

Wölfle worked at the Max Planck Institute for Physics in Munich, with a research stay at Cornell University, USA from 1971 to 1973. Since 1998, he has been the head of a research group at the Institute for Nanotechnology, Forschungszentrum Karlsruhe.

For calculations and predictions of the fundamental forces acting on quantised vortices in superfluids, superconductors and other ordered systems: the Iordanskii force and the Kopnin force.

Iordanski was born in 1929 in Kaliningrad (now Korolev) near Moscow, Russia. From 1953 to 1956, he was a research fellow at the Arzamas nuclear centre. In 1956 Sergey Iordanski was decorated with the Order of Red Banner by the USSR government for his work in applied science.

Nakamura was born in Japan in 1968. He was educated in the Department of Applied Physics in the University of Tokyo, Japan. In 1992 he joined the Fundamental Research Laboratories of the NEC Corporation, Tsukuba, Japan, becoming principal researcher in 2001 and a research fellow in 2005.

Jaw-Shen Tsai was born in Taiwan in 1952. He received his BA degree in physics in 1975 from the University of California at Berkeley and his PhD degree in physics in 1983 from the State University of New York. He became an NEC research fellow in 2001. Visiting scientist positions include the universities of Tokyo, Tokyo Institute of Technology, Tohoku, Tsukuba, Nanjing and Nagoya.

Simon's research concerned measurement of specific heats at low temperatures, which remained the basis of his scientific interest throughout his life. He received his doctorate in 1921. In 1931, he was appointed to the chair of physical chemistry at the Technical University of Breslau (Wrocław University of Science and Technology), and in 1932 was a visiting professor at Berkeley.

In June 1933, he accepted the invitation of FA Lindemann (later Lord Cherwell) to work at the Clarendon Laboratory in Oxford. In 1935, he was appointed Reader in Thermodynamics, and Professor.

Simon was elected to the Royal Society in 1941. In 1952, he was elected an honorary foreign member of the American Academy of Arts and Sciences. He was also awarded: