Known worldwide for his contributions to theoretical physics and cosmology and for his popular-science writings, Stephen William Hawking was born in Oxford on 8 January 1942 to Frank and Isobel Hawking, and grew up in Highgate, London and St Albans, Hertfordshire. 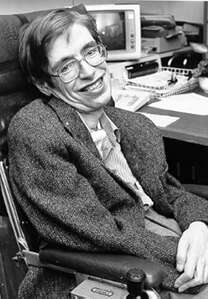 He was educated at St Albans School and at University College, Oxford. Despite his father’s wish for him to study medicine, Hawking opted for physics and chemistry, beginning his undergraduate studies in 1959, aged 17.

Initially bored and lonely at university, Hawking fared better after joining the boat club, in which he coxed a rowing team. He found his academic studies easy but didn’t work especially hard, and fell on the boundary between first- and second-class degrees, ultimately being awarded the former following a viva.

He began his doctoral training in cosmology at Cambridge under Dennis Sciama in 1962, but was diagnosed with motor neurone disease the following year. Doctors’ estimates that Hawking had only two years to live proved to be wrong, and after an initial depression over his illness he both returned to work and married Jane Wilde, a friend of his sister’s whom Hawking had met shortly before his illness was diagnosed.

At Cambridge, Hawking and his colleague Roger Penrose developed new mathematical tools for use in Einstein’s general relativity. Using these, they showed that singularities – points of infinite density and energy such as those thought to be at the centre of black holes – are a common feature of the theory, and that, if the effects of quantum mechanics are ignored, the universe must also have begun at such a point.

This formed the basis of Hawking’s 1966 PhD thesis, which served as a powerful argument in favour of the big bang theory of the origin of the universe, which at that time was subject to extensive debate among cosmologists who favoured it and those who supported Fred Hoyle’s steady state model.

In 1969, Hawking was made a fellow of Gonville and Caius College, and subsequently began the work on black holes for which he is perhaps best known among physicists. He did, however, make a bet with Caltech’s Kip Thorne that the X-ray source Cygnus X-1 was not a black hole, which Hawking considered an insurance policy against his work being incorrect, and which would be the first of a number of friendly wagers made with colleagues. (He conceded the bet in 1990.)

In 1970, Hawking mathematically proved a theorem of John Wheeler’s that any black hole can be completely described by just three properties – its mass, angular momentum, and electric charge.

That same year, he formulated a set of principles that, applied to black holes, are analogous to the laws of thermodynamics. Until then, the concept of black holes had presented a problem in that it appeared that they allowed the second law of thermodynamics to be broken.

The second law of thermodynamics says that the amount of entropy in a system will always increase. As entropy is a measure of disorder, it would be possible to decrease the total entropy in the universe simply by throwing mass into a black hole.

Hawking’s discovery that the area of a black hole also never decreases led Jacob Bekenstein to suggest that in some way the area is the entropy of the black hole. The problem with this was that if a black hole has entropy then it must have a temperature, and must therefore radiate heat – so it would no longer be black.

In 1974, Hawking showed that black holes will in fact do precisely this through what is now known as Hawking radiation, which arises due to quantum fluctuations at the black hole’s event horizon. Space, generally considered to be empty, is actually filled with pairs of virtual particles popping into and out of existence, and whereas they would normally vanish more or less instantly, in this case, for each pair, one is trapped by the black hole and the other escapes.

If enough time passes, black holes will radiate away all their energy and completely evaporate. The lifetime of a black hole is proportional to the cube of its mass – for a solar-mass black hole it would be around 1067 years.

The same year as his radiation revelation, Hawking was elected as a fellow of the Royal Society and in 1979 was appointed Lucasian Professor of Mathematics at Cambridge, the post once held by Sir Isaac Newton. By this time, his speech had deteriorated to the point where only those close to him could comprehend him easily, and family or close friends would often have to help him make himself understood.

Hawking then turned his professional attention back to the universe as a whole. In 1983, along with Jim Hartle of the University of California, Santa Barbara, he developed a cosmological model in which the universe has no boundary in spacetime – overturning his own earlier theory that it must have begun with a singularity.

In 1985, Hawking contracted pneumonia during a visit to CERN, and, following an emergency tracheotomy, lost the remainder of his ability to speak. A donation of speech-synthesis software from American company Words Plus the following year restored Hawking’s ability to communicate independently – albeit painstakingly slowly – and gave him the computerised voice that would be instantly identifiable for the remainder of his life.

Hawking had begun to work on a popular-science book in 1982 with an eye to funding his children’s education and his own home care, and A Brief History of Time was published by Bantam Press in 1988. It would remain on the Sunday Times bestseller list for an unprecedented four years and sell more than nine million copies – and make its author famous way beyond the world of cosmology. A collection of essays, Black Holes and Baby Universes, would follow in 1993, and a television series, Stephen Hawking’s Universe, in 1997. Hawking also made a number of TV appearances as himself, including in Star Trek: The Next Generation, The Simpsons and The Big Bang Theory.

Fame and the level of medical care he required strained Hawking’s marriage, however, and he and Jane divorced in 1995; Hawking married Elaine Mason, a former nurse to whom he had become close, later that year.

Hawking continued to write about science for the general public, publishing The Universe in a Nutshell in 2001 and A Briefer History of Time in 2005, and to work on problems in theoretical physics and cosmology.

In 2006, Hawking, Jim Hartle and Thomas Hertog proposed a cosmological model in which, rather than the universe beginning with a specific set of initial conditions from which it developed into the state that we see today, the present state selects the past in much the same way as the observing of a quantum system causes its wavefunction to collapse from superimposed states to one definite condition – such as a living cat or a dead one.

The same year saw Hawking and Mason divorce. Reconciliation with his first wife, Jane, and their children and grandchildren followed, and her account of their lives would later be made into the film The Theory of Everything.

Hawking had a public debate with Peter Higgs in 2008 after claiming – and betting – that the Higgs boson would never be found, but quickly acknowledged that he’d been wrong after its discovery at CERN in 2012. He retired from the Lucasian professorship in 2009 owing to a university policy that prevents holders retaining the chair past the age of 67.

Most recently, Hawking had become involved in space advocacy, arguing that colonising space is vital to the long-term survival of humanity, and had warned of the dangers of both artificial intelligence and of making contact with any extraterrestrial civilisation. Despite the latter, in 2015 he helped to launch the Breakthrough Initiatives – a $100m search for alien life funded by Russian physicist and entrepreneur Yuri Milner.

During his career, Hawking – an Honorary Fellow of the Institute of Physics (IOP) – was honoured with a number of awards, including IOP’s first Dirac Medal in 1987, the Royal Astronomical Society’s Gold Medal, the Wolf Prize, the Royal Society’s Copley Medal, and the United States’ highest civilian honour, the Presidential Medal of Freedom. He was made a CBE in 1982 and appointed as a member of the Order of Companions of Honour in 1989.