Sir Bernard Lovell, world-renowned physicist and pioneering radio astronomer, died on 6 August 2012 at his home in Cheshire. He was 98. 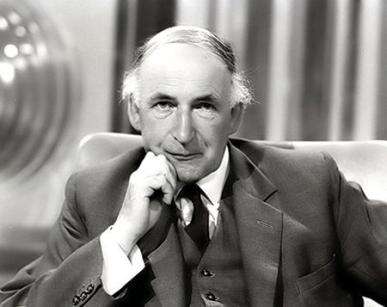 He was best known to the general public as the founder and director of the Jodrell Bank Observatory, where he conceived the idea of the 76 m radio telescope that was later named after him. When completed in 1957 it was by far the largest in the world and it remains the third largest steerable telescope, continuing to be used by the astronomy community for cutting-edge research.

The telescope and observatory, as well as Lovell's personal influence, have also inspired generations of children and university students to study or work in science. Many individuals and organisations from around the world have paid tribute to Lovell in books of condolence opened at Jodrell Bank and online by the University of Manchester, of which Jodrell Bank is a part.

Lovell was born in Oldland Common, Gloucestershire. His father was a local businessman, Methodist lay preacher and keen musician and his mother came from a family of cricketers and played cricket herself. Both music and cricket became his abiding passions outside of science.

He attended what was then Kingswood Grammar School where, in his own words, he did not think that he was “a very good scholar”. He said, however, that his life changed significantly when at the age of 15 he was taken on a school trip organised by the physics teacher to hear a lecture by Prof. AM Tyndall at the newly-opened HH Wills Physics Laboratory at the University of Bristol. This made a dramatic impression and he was determined to become one of Tyndall's students.

In 1931 he embarked on a physics degree at the University of Bristol. On being approached by the university’s cricket captain to join his team, he said that he had “come here to work, not to play cricket” – a revolution in his thinking since schooldays, he said, though he did eventually play for three teams during his undergraduate studies. For all of his life, however, he remained true to his upbringing and refused to play or attend cricket matches on a Sunday.

He graduated in 1934 with first-class honours and went on to study for a doctorate at Bristol, investigating the conductivity of thin metallic films. Working with films of rubidium on glass surfaces, he concluded that the reduction in their conductivity when thin was due to impurities. He completed his PhD in two years and sought a postdoctoral position in 1936. Although he wanted to work with PMS Blackett at Birkbeck College in London, this was not to be and he reluctantly accepted a post as an assistant lecturer at the University of Manchester, working under WL Bragg, who made celebrated advances in crystallography. Lovell, however, found it difficult to become interested in crystallography, as his preference was to undertake research in relatively uncharted territory.

However, Bragg moved on from Manchester in 1937 and it so happened that Blackett was appointed to succeed him. Blackett's interest was in cosmic rays and Lovell was part of the cosmic ray research team until the outbreak of war in 1939, when he was seconded to the Telecommunications Research Establishment, working first at Worth Matravers in Dorset and later at Malvern, though he also spent some time at other locations including St Athan in Wales and Staxton Wold near Scarborough.

He headed a team that developed radar systems to enable fighters to locate enemy aircraft at night, and to allow coastal command aircraft to detect submarines surfacing in the dark, as well as developing H2S radar, which enabled British bombers to improve their aim at targets during night raids. For his wartime work he was awarded the OBE in 1946.

When the war ended Lovell returned to Manchester and to cosmic ray research. During his wartime research he had wondered whether transient echoes observed by radar might be reflections from cosmic ray showers, but he and Blackett were able to show that the echoes came instead from meteors, and their work led on to further advances in meteor research.

The early investigations were made using an ex-military mobile radar unit in a field at Jodrell Bank belonging to the university’s botany department, to which he had decamped to avoid the interference caused by electric trams nearer to the city centre. The university soon agreed to provide a permanent establishment at the site. Lovell initially built a radio telescope that pointed in a fixed direction, but soon realised that a larger telescope that could be pointed at any direction in the sky was needed.

He first proposed the new telescope in 1948 and work began on its construction in 1950, with Sir Charles Husband acting as consultant engineer. The initial proposals hugely underestimated the costs, which were to be met by the Nuffield Foundation and the government’s Department of Scientific and Industrial Research. The project was plagued by strikes and bureaucratic delays and the escalating costs became the subject of heated public debate, but the telescope eventually went into operation on 2 August 1957.

When two months later the Soviet Union launched Sputnik 1, the first artificial satellite, the telescope managed to track it and was the only instrument capable of doing so. This silenced much of the criticism and Jodrell Bank went on to capture the public’s attention with other notable coups, such as transmitting the signals to release the US’s Pioneer V space probe from its carrier rocket at a distance of 22 million miles – again the only device capable of doing so. The telescope played a part in the Cold War because of its potential for tracking intercontinental ballistic missiles.

Lovell contributed hugely to the emerging field of radio astronomy, presiding over many important advances such as the first observations of quasars in 1960, new discoveries in pulsar research and more accurate measurements of the solar system. He was director of the Jodrell Bank Observatory, as it came to be known, from 1945 to 1980, and was the university’s Professor of Radio Astronomy from 1951 to 1980, remaining emeritus professor until his death. He was elected as a fellow of the Royal Society in 1955 and was knighted in 1961 for his pioneering work in radio astronomy.

He was invited by the BBC to give the 1958 Reith Lectures, when he spoke on “The Individual and the Universe”. As well as scientific papers and publications, he wrote several popular books including The Exploration of Outer Space, The Story of Jodrell Bank, and his autobiography, Astronomer by Chance.

In retirement he continued to play the organ in his village church in Swettenham, as he had done for 30 years, until his eyesight was not equal to reading music. He had been president of the Incorporated Guild of Church Musicians and at one time president of Lancashire Cricket Club, having participated in cricket for the greater part of his life. He enjoyed the arboretum that he had created at his home, and often spent time at Jodrell Bank until quite recently. He would have reached his 99th birthday on 31 August.

Lovell married Mary Joyce Chesterman in 1937. They had three daughters and two sons, 14 grandchildren and 14 great-grandchildren. His wife died in 1993 and one of his daughters predeceased him.