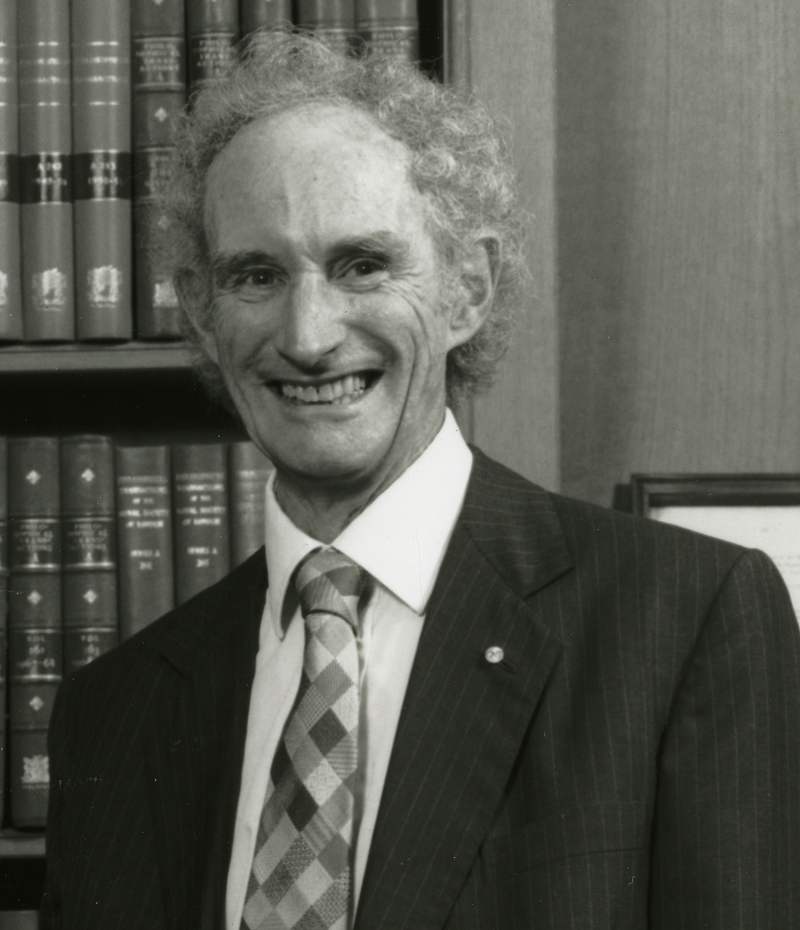 Professor Lord May of Oxford was an Australian physicist, mathematician and ecologist, who believed strongly in the responsibility of the scientist to work for the benefit of society.

He was born on 8 January 1936 in Sydney, Australia and attended Woollahra Primary School where he developed a fascination with mathematical puzzles. In 1948 he began his secondary education at Sydney Boys High School where, besides studying academic disciplines, he also represented the school in debating competitions. He left in 1952, having excelled universally, to study chemical engineering and theoretical physics at the University of Sydney.

Graduating in 1956, Robert went on to complete a PhD in superconductivity in 1959 and continued to research in theoretical physics.

He was Gordon McKay lecturer in applied mathematics at Harvard University between 1959 and 1961, returned to the University of Sydney in 1962 as a senior lecturer, and married Judith Feiner, who he had met while in the US.

In 1969 he was made a professor of theoretical physics at Sydney, and it was at this point that he joined a group of scientists for social responsibility who were concerned about human impacts on the environment. This was to be a turning point in his career and his life, resulting as it did in a significant and continuing focus on ecology.

From 1973 until 1988 he was Class of 1877 Professor of Zoology at Princeton University, serving as chairman of the University Research Board between 1977 and 1988. While at Princeton, following a visit to the UK, he also began collaborating with infectious disease epidemiologist, Roy Anderson from Imperial College, and developed strong links with Imperial College’s ecological research laboratories at Silwood Park in Berkshire.

In 1973 Robert May became a notable figure. He published a book, Stability and Complexity in Model Ecosystems, in which he illustrated how systems tend to become more unstable and chaotic as they become more complex.

He showed mathematically, that in a system with multiple species competing for resources, the more species there were, the less stable the system was as a whole. He also showed that this principle applies just as well to the physics of fluids as it does to populations of living things or even financial systems.

It was an abstract mathematical concept which challenged the ideas of the time and had major real-world implications, some of which scientists are still exploring today.

It became known as the Wigner-May theorem, and was first published in 1972.

Fondly known as ‘The Grandfather of Chaos’, as one of the forerunners of Chaos theory, Robert May attended the first symposium on the subject in 1977, organised by the New York Academy of Sciences.

Later, with the onset of the Aids crisis in the 1980s, he turned to studying the spread of infection, and with Roy Anderson developed a model that predicted accelerated HIV transmission where multiple sexual partners were usual within communities.

He made the move to Oxford in 1988, to take up the post of Royal Society Research Professorship, a joint position with Imperial College London and the University of Oxford. He held the post until 1995 and remained in Oxford for the rest of his life.

In 1996 Robert May was knighted for his services to science and in 2001 became a peer in the House of Lords, taking the title Lord May of Oxford.

An Honorary Fellow of the Institute of Physics, he was Chief Scientific Adviser to HM Government and Head of the Office of Science and Technology from 1995 to 2000, and President of the Royal Society between 2000 and 2005.

Robert May reached the highest levels of the British scientific and political establishments, making both politicians and the scientific community consider the public they served. His scientific career spanned eight decades and three continents, making his work and his life internationally influential.

Friend and colleague, Sir Peter Knight FRS, said of him: “Bob May was an extraordinary polymath, pioneer of the application of mathematics to network theory and dynamical systems, and a fierce defender of the scientific method especially to figures in government. He published widely and his work has had enormous impact (his Hirsch h-factor according to Google Scholar is 175!).

“He was an inspirational figure at Imperial College in what is known as the Silwood Circle of extraordinary ecologists (May, Southwood, Conway, Lawton, Krebs, Beddington, Hassell, Crawley, Anderson and others).

“He was a great supporter of adventure in the mathematical description of the world, rarely in doubt and always great fun to be with: I have treasured memories of being guided by him in setting up an Institute of Mathematical Sciences at Imperial, and during his vigorous leadership at the Royal Society and the Government Office for Science and later. From his early work in statistical mechanics and superconductivity theory, through his pioneering work on chaotic systems to ecological dynamics, he left a lasting legacy of innovation and depth.

“Who would ever forget, once read, his essay in Nature called Ecology for Bankers at the height of the 2007/8 banking crisis. He inspired me, and to be honest, terrified me by his quick-thinking analytical mind: a man never to be forgotten.”