‘Joe’ was internationally recognised for his contributions to the physics of quantum fluids. 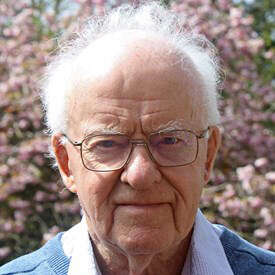 Professor William Frank Vinen, known as Joe to all his friends and colleagues, was internationally recognised for his fundamental theoretical and experimental contributions to the physics of quantum fluids.

In addition, as Chairman of the Education Committees of both the Royal Society and the Institute of Physics (IOP), he played a leading role in the introduction of the four-year undergraduate degree for professional physicists.

From Watford Grammar School, Joe was awarded a foundation scholarship at Clare College, Cambridge, obtaining a first-class degree in physics in 1953. This was followed by a research studentship in the prestigious Royal Society Mond Laboratory in Cambridge.

His project was on liquid helium, which is superfluid at low temperatures. He investigated the effect of heat flow on the absorption of ‘second sound’ (a thermal wave unique to superfluids). In his second year, he teamed up with fellow research student Henry Hall, to study such properties in a bath of rotating superfluid helium.

This provided the first, albeit indirect, evidence for the existence of quantised vortex lines in superfluid helium. On subsequent appointment to a research fellowship, he devised an ingenious, simple, and elegant experiment trapping such vortices on a vibrating wire.

This enabled him to demonstrate that the circulation of superfluid flow around the core of the trapped vortex was quantised in units of h/m, where h is Planck’s constant and m the mass of the helium atom. This provided the first direct evidence for quantum mechanics influencing the motion of objects on a macroscopic scale.

In 1962 he was appointed to the Poynting Chair Professor of Physics at the University of Birmingham, to set up a new Condensed Matter Group, and later to the Poynting Chair and Head of Department. In addition to investigating light scattering and ions in both solid and liquid helium, he continued to make major contributions to our experimental and theoretical understanding of both superfluid helium and type-II superconductors.

Any magnetic flux penetrating type-II superconductors is associated with pairs of electrons flowing around individual vortex lines, with the flux now quantised in units of h/2e, where 2e represent the charge of the paired electrons. In 1987, he was strongly involved in the setting up of a university-wide interdisciplinary group, to study the newly discovered high-temperature superconductors.

The group quickly demonstrated flux quantisation in the same units. This provided the first evidence that these materials again involved the pairing of electrons, in contrast to other conflicting models suggested at the time.

On his formal retirement from Birmingham in 1997 until a few months before he died, he continued to make seminal contributions to our understanding of vorticity and turbulence in quantum fluids, including liquid helium-3 at very low temperatures.

This involved active participation with several UK groups working on similar problems and internationally with three groups in the US, as well as groups in France, Japan, and the Czech Republic. The dynamics of quantum vorticity and turbulence in superfluids is now known as Vinen turbulence and described by the Vinen equation. Very similar mathematics and physics may well be involved on a cosmic scale in describing quantum gravity vorticity and turbulence before particles were formed.

In 1963 he was jointly awarded with Henry Hall the IOP’s Simon Memorial Prize. In 1973, he was elected Fellow of the Royal Society. Other awards include the Fernand Holweck Medal and Prize made jointly by the IOP and the French Physical Society in 1978, the Rumford Medal of the Royal Society in 1980, and the Guthrie Medal and Prize from the IOP in 2005. In 2008 he received an honorary doctorate from Charles University of Prague.

Throughout his long and distinguished career as an outstanding physicist, he provided the strongest possible support and inspiration to generations of research students and to all those who worked with him.

Joe is survived by his wife Susan and children Katie and Richard.

Thanks to Professor Colin Gough, University of Birmingham and Professor Carlo Barenghi, Newcastle University for the biographical information.