Nuclear physicist and IOP Fellow Professor Leslie Green died on 25 February 2018 at the age of 92. 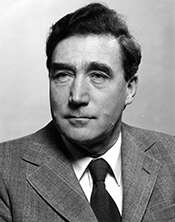 Born on 30 March 1925, he attended Alderman Newton’s School in Leicester and went up to King’s College Cambridge in 1942, where he took Natural Sciences Part 1 followed by Physics Part 2, graduating with an upper second in 1945.

He completed a PhD in tertiary fission in 1949 and in the same year became a lecturer at the University of Liverpool, where he worked on the 1.0 MV Cockcroft-Walton accelerator with John Willmott. They worked on characterising resonances in light nuclei using high efficiency NaI(Tl) gamma-ray detectors.

They also plotted to finance a new Van de Graff accelerator to replace the ageing cyclotron that James Chadwick had financed in the 1930s with his Nobel Prize money. They were very successful and the foundations were laid in 1960 for buildings to house a High Voltage 5 MV EN tandem Van de Graaff. The accelerator arrived in 1961 and experiments started in 1962.

Les had an outstandingly innovative postdoc, Peter Andrews, who had graduated with his PhD under Les’s supervision. Peter understood semiconductors and made high-resolution charged-particle detectors from high-purity silicon, including the first paired detectors that could distinguish between different types of particles. These detectors replaced expensive and cumbersome magnetic spectrometers and enabled the quantum mechanics of particles near nuclei to be properly understood.

The solid-state revolution continued with the acquisition of very-high-resolution gamma-ray detectors made of ingots of lithium drifted germanium. These devices had been invented in Chalk River Nuclear Laboratories in Canada. Geoff Kaye and I had used these while on postdocs there in the mid-1960s. We brought the technology back to Liverpool with us, including the use of active escape suppression shields to greatly reduce unwanted events.

Meanwhile Les had been offered a chair of physics at Manchester. He was reluctant to leave his comfortable family home in West Kirby on Wirral and thought staying at Liverpool was going to produce better opportunities. So John Willmott went to Manchester and Les was appointed to a Chair of Experimental Physics at Liverpool in 1964.

Les had a remarkable ability to resource funds. The tandem lab became very well resourced with advanced apparatus, electronics and early computers for data taking. Peter Twin discovered how to use gamma-rays to measure unique quantum values for the excited states of nuclei, which was a major experimental breakthrough in providing, for the first time, reliable data for the various current theories of nuclear behaviour. Les’s group became the world leaders in the nuclear spectroscopy of (s-d shell, and later f-p shell) nuclei in the mass range 21 to 70 amu.

In 1967 he was made dean of the science faculty. He appointed three of us from the physics, chemistry and zoology departments to be admissions sub-deans. He was so effective as dean that he was made a Pro Vice-Chancellor in 1978. Les was an outstanding head of the Liverpool Physics Department in the 1970s.

Nuclear physics using accelerated heavy atoms had become very fashionable in the mid-1970s and John Willmott and Les persuaded the Science Research Council (SRC) to budget to build a very ambitious 30 MV tandem Van de Graaff to accelerate “heavy ions”. Funding was agreed in principle but the location of the Nuclear Structure Facility (NSF) was not. A committee of “wise men” chaired by Professor Bill Burcham (Birmingham) plumped for Daresbury and Les became the director of the Daresbury Laboratory in 1981

Meticulous R&D was carried out at Daresbury in the 1970s to ensure that the NSF would be a Rolls-Royce accelerator but, due to the slowing up of funding and some technical glitches, about six months’ progress was being made per year in the late 1970s and early 1980s. Peter Twin, who is an outstanding organiser, became the chief of the NSF and it started with useful beams for experiments in the autumn of 1982.

The NSF at Daresbury raced ahead to very rapidly become one of the leading nuclear physics labs in the world. Large ESS gamma-ray arrays were designed and built, which have revolutionised how nuclear structure research is done. Superdeformed nuclei were discovered experimentally. Fast-spinning nuclei were discovered to change their shape as their spin increased. The use of recoil separators in conjunction with ESS arrays for nuclear spectroscopy far from stability was pioneered. Innovative techniques in hyperfine laser spectroscopy were developed.

An Isotope Separation On-Line facility was built with the addition of a dilution refrigerator to polarise nuclei at milli-Kelvin temperatures. International collaborations continued with old friends from the Niels Bohr Institute in Denmark and new collaborations started with French, Italian, Greek and German laboratories.

As director of the lab, Les also had responsibility for the Synchrotron Radiation Facility. This flourished on his watch; the mechanism for the contraction of muscles was established and the indenticality of artificial and natural insulin proven. Daresbury became the originator of many ground-breaking innovations which have been adopted by many other labs all over the world.

Les always did his homework and was an ace organiser, in his own quiet way. He was supremely effective in accessing funds and persuading committees to fund really productive and effective projects.

He was usually very supportive of lecturers and he plotted long and assiduously to create posts of lecturer in the physics department, which was very difficult at the time. He knew that effectiveness in research and teaching rested on having competent, talented people in the right places.

He was very good company indeed to be with and unflaggingly optimistic and cheerful. He led a life and career to be celebrated.

His family was the basis of his life and he is survived by his daughter Dr Sarah Green, son Dr Paul Green and grandchildren. His wife, Dr Terry Green, died less than four weeks after him on 21 March 2018.