IOP Fellow, Professor John Brown, a man passionate about generating wider awareness of astronomy and its role in culture, has died aged 72. 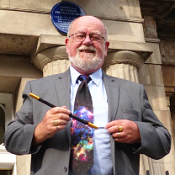 At the University of Glasgow, John led a research group in the theoretical modelling of solar and stellar plasmas, using spacecraft data to investigate solar high-energy particles and solar flares.

He was appointed the 10th Astronomer Royal for Scotland in February 1995.

John, whose interest in astronomy began at the age of eight when he read a science fiction work by Patrick Moore, was passionate about engaging the public in his field. His OBE, announced in the 2016 Birthday Honours, was for services to the promotion of astronomy and science education.

John gave many talks and often incorporated magic tricks and poetry in the Scots language into his performances. This year, he and poet Rab Wilson published ‘Oor Big Braw Cosmos’.

By working with IOP Scotland to install and unveil several blue plaques celebrating the achievements of Scottish astronomers, John helped to raise the profile of famous Scottish scientists.

IOP National Manager (Scotland), Alison McLure, said: “John was a great driving force in celebrating the achievements of science and scientists and he was always on hand to provide help and infectious enthusiasm.”

He will be missed.