IOP member Helen Mason died peacefully in her sleep on 6 December 2019 at the age of 34. 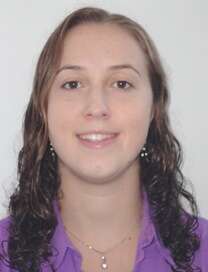 Academically, Helen was very intelligent. She went to Durham University to study natural science and gained a first in MSci chemistry and mathematics. She went on to study photochromism and spin-crossover in single crystals using the Diamond Light Source in Harwell and synchrotron facilities in Japan. She was in the process of finalising her PhD.

At her celebration of life service her supervisor at Durham, Professor Judith Howard CBE FRS, described her death as the tragic loss of a bright young mind. Helen was always very thorough, patient, paid attention to detail and questioned common practices such as applying Beer’s law to liquid solutions. For her, long-held assumptions needed substantiating from source. Professor Howard commented on Helen that: “She was a pleasure to work alongside with her calm, natural good nature and engaging smile.”

Alongside this academic work, Helen was a competitive gymnast, trampolinist, swimmer, cyclist and runner. She was a natural horsewoman and even trained at the Northern Riding School in Doncaster to be a jockey. She represented Durham in the British Universities Sports Association gymnastics, was a level-three coach for trampolining and a lifeguard and swimming teacher. She excelled in her later years as a triathlete, being part of Team GB competing in Rotterdam and qualifying for each of the following year’s International Triathlon Union championships.

In August 2018 Helen was in an unexplained and life-changing cycling accident. She overcame that setback and regained sufficient fitness to qualify for the Team GB European Triathlon age group championships in Estonia and Sweden in 2020. She had also won the women’s very first quarter ISOMAN championship.

Underlying all this she was diagnosed with Hypermobile Ehlers-Danlos syndrome in her teens, which causes progressive collagen abnormalities affecting all organs. She researched and analysed her own bio-mechanical needs and hence the sport, which she loved, ameliorated the deterioration by strengthening musculature to prevent her becoming wheelchair bound.

Despite all these limitations, Helen always encouraged others, often by example, to achieve beyond their self-belief, either academically or physically, in a quiet but persuasive way.

Some of the brightest minds have been associated with those who, in the eyes of the world are incapable – but limitations can be a massive incentive and enabler.