Nuclear physicist was influential at Dounreay and Windscale. 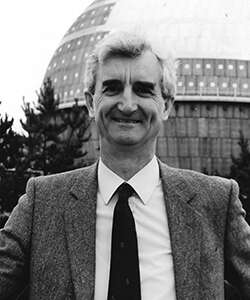 Dr Ian Birss was a nuclear physicist who spent most of his working life in the Northern group of the United Kingdom Atomic Energy Authority (UKAEA), working at Dounreay on fast reactors, at Windscale and Hunterston on advanced gas-cooled reactors (AGRs), and as the head of Risley Nuclear Laboratories.

A former colleague from his work in the 1960s/70s described him as being influential at Dounreay and Windscale.

He was born in 1931 in Montrose, Scotland. After graduating with a first in natural philosophy at the University of St Andrews, Ian went to the University of Glasgow in 1954 to undertake a PhD in the department led by Professor Philip Dee in the group of Dr James (Jimmy) Atkinson.

For the project he built the first bubble chamber in Europe, with tracks photographed in November 1955, following publication of the idea by Donald A Glaser in the US in 1952. After a spell lecturing in physics at Glasgow he joined the UKAEA in approximately 1960 and went with Professor Atkinson to Dounreay on the north coast of Scotland, working on the Dounreay Materials Test Reactor (DMTR) and Dounreay Fast Reactor (DFR).

In the late 1950s and 1960s his scientific work was published in the journals Nature and Nuclear Engineering. In his work he collaborated with colleagues at CERN, in Canada, and in the US at Oak Ridge. In the UK he worked with colleagues in UKAEA Harwell and Winfrith.

He was appointed a Fellow of the Institute of Physics in 1970 and later as a Chartered Nuclear Engineer.

He left Thurso in 1967 when his wife Davina was diagnosed with multiple sclerosis. The family moved to Seascale, west Cumbria, and in the 1960/70s he worked on the Windscale AGR, the development reactor for the AGR programme. Following this Ian worked as attached staff at the Hunterston B power station in Scotland, which had two AGRs.

His time at Hunterston was prolonged after seawater entered one of the reactors in 1977, then he returned to Windscale in the early 1980s and later that decade became head of Risley Nuclear Laboratories. The laboratory also comprised the National Centre for Tribology and the Inspection Validation Centre.

The latter was concerned with validating techniques used to detect cracks in steel pressure vessel components. On his retirement in 1990, Ian and Davina returned to Scotland and in the 1990s he served on various Nuclear Safety Committees.

Throughout his life Ian always took on numerous active roles in the community: as a scout leader, president of his local Rotary club, elder of the church, president of the local bowling club, and treasurer of the local constituency Conservative and Unionist Association in North Ayrshire.

Ian is survived by his wife Davina, their children Colin and Stephen, and six grandchildren.

Thanks to The Rt Hon Sir Colin Birss for the biographical information.