Jonathan Flint CBE today (1 October 2019) begins his tenure as President of the Institute of Physics. He has been President-elect since October 2017 and will now serve for two years as President. 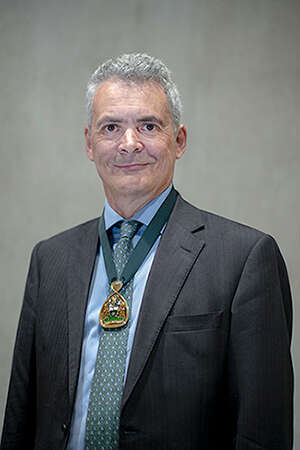 Jonathan is a Non-executive Director at Marshall of Cambridge (Holdings) Limited and a member of the board of trustees of the Oxford Trust, a charity set up to encourage the pursuit of science and enterprise in the region. He also sits on the QuantIC strategic advisory board for the UK National Quantum Technologies Programme (UK-NQTP) and is a Non-executive Director at Oxford University Innovation - the tech transfer and consultancy company set up to manage commercialisation of the University’s  R&D.

He started his career designing scientific and communications satellites at Marconi, where he worked for twenty years, before and after its acquisition by BAE Systems. He held both technical and managerial roles before becoming a managing director at Marconi and then at BAE Systems.

In 2005, Jonathan was appointed CEO of Oxford Instruments – the first substantial spin-out companies from Oxford University – where he served for 11 years.

He has been a board member of the UK National Neutron Source at Harwell and sits on the economic advisory board for the UK Science and Technology Facilities Council (now part of UK Research and Innovation).

In July 2019, Jonathan joined Refeyn, a physics-based technology company spun out from research at Oxford University, as Executive Chairman.

Jonathan has been a Fellow of the IOP since 2007 and is also a Fellow of the Royal Academy of Engineering. He was awarded a CBE in 2012 ‘for services to Business and Science’.