“For companies involved in physics research and development, I would wholeheartedly recommend the IOP Accelerator Centre. Being part of the IOP network, being in such a great location and having the support of the IOP business and innovation team in the same building has been a huge support.”

Hira Virdee, 30, is a physicist, entrepreneur and the founder of the tech start-up Lumi Space. After achieving impressive academic success, including a PhD from UCL in ‘modelling the orbits of space debris’, Hira set up Lumi Space in September 2018.

The company is located in the Institute of Physics’ Accelerator Centre, where Hira and his team are quietly shaping the future of space satellite power - and potentially the spacescape of the Milky Way.

In this article Hira talks about his journey so far, what the future of satellite power technology will look like, and where the Institute of Physics (IOP) fits into this.

The journey to founding Lumi Space

“It’s been about eight years since my PhD. At that point there weren’t many graduate roles in the UK space sector” he explains, “at least not the sort that appealed to me.”

He spent some time in data science, business intelligence and similar roles, but “soon ended up looking for new challenges”. Wanting to apply himself to a career that required his scientific acumen, Hira made the decision to leave his day job.

Since his post-graduate research days, Hira has been interested in how to tackle the problem of man-made space debris, which presents a serious threat to satellites and manned space vehicles. Hira predicts that as a result of this debris, “within a decade it will be too dangerous to send manned craft into orbit”.

He approached a talent investor, Entrepreneur First, and with their support began to seriously formulate his plans.

Drawing on his PhD research and exploring how he could break into the space industry with his particular skill set, Lumi Space was founded “and it’s been an intense journey ever since”.

Continuing, Hira explains: “Satellites have shrunk so drastically over the past decade. Where they used to be the size of a van and weigh a tonne, now those that are most innovative weigh a kilogramme and are smaller than a shoe box.

“This rapid shrinking has come about through advances in technology, but it comes with a limitation. The satellites just can’t get enough power.”

Enabling the next generation of satellite technology

Watch this sixty-second film and find out how Hira can power a satellite from Earth. 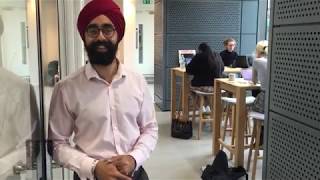 Lumi Space already has a team of eight interns sourced through the university SEPnet programme and each with a specialty that is of interest to Lumi Space, for example tracking, laser experiments or even grant writing, investment and project management.

“The relationship works two ways” he explains. “The team members each get a crash course in everything business related that they wouldn’t get through university, and Lumi Space starts determining who we might want to hire in the future.

“We’re always searching for people who have an interest in space, especially those who have knowledge about laser technology and the satellite industry.” 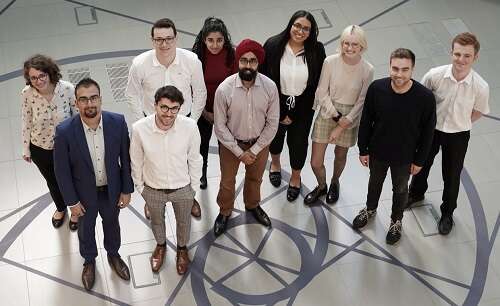 The idea of a company that specialises in creating technology to power satellites from Earth using lasers is not something we encounter every day. How do you market this kind of technology, and to whom?

“Alongside our technical development, we are in close contact with the people who will become our customers.

“People like satellite manufacturers, satellite operators - so those responsible for the day-to-day operations of satellites and maintaining and communicating with them. There are so many applications of satellite technology. We’ve got Earth observations in terms of climate change, weather prediction, and disaster early warning systems. There are also means of predicting leaks of natural gas and water leaks from space.”

And it’s not just satellite technology that can utilise the developments being made by Lumi Space. The space industry has a significant environmental impact. Launching space craft and hardware requires the use of large amounts of fuels and other toxic chemicals, so it is an area where any moves to reduce the environmental and potential health impacts of employing these materials are to be welcomed.

The potential to power electric aircraft in flight using lasers on Earth could provide a means of drastically cutting the use of fossil fuels used as fuel in aviation to help tackle global climate change. This technology could provide a means of cleaning up space debris. Hira believes “we are quickly approaching a level where we cannot safely send humans off the planet, and that could be in as little as ten years”.

Space debris is man-made – the remains of rockets that have launched satellites into space, old satellites that have reached the end of their life and have not been programmed to re-enter the Earth’s atmosphere according to international guidelines, and debris that has resulted from intentional anti-satellite test collisions and from unintended collisions.

As the amount of space debris increases, so does the likelihood of random unintended collisions which could cascade and drastically impact the safety of our current space projects, such as the International Space Station. Satellites currently providing everyday conveniences such as mobile phone communications, GPS and digital TV could be taken out by collisions, not to mention those employed in cyber security and international defence. This risk is becoming critical, and the kind of technology being developed by Lumi Space will be increasingly necessary.

Lumi Space is the first company to take advantage of the new IOP  Accelerator Centre fully-serviced workspace in King's Cross, and he explains what advantages this had given him and his team:

“In the start-up arena every day brings a new challenge. There are commercial, administrative, recruiting, procurement and financial decisions to be taken. Trying to predict key challenges on the horizon and beyond are all part of the role of the CEO too, and keeping potential customers excited about what we’re working on, thinking about future collaborations and planning future financing.

“While the team is working on technical development, commercial research and commercial intelligence, I’m fostering collaborations with large companies, universities and also with small companies about their next steps and what kind of pilot studies we might undertake with them. I’m also applying for grants and putting the financial framework in place, well in advance of the next phases of development, to prevent any financial risk to the company as we move towards the next technical stages. We’re actually hoping to conduct proof of concept tests in the next 12-18 months which is very exciting.”

Benefits of being in the IOP Accelerator Centre workspace

“For companies involved in physics research and development I would wholeheartedly recommend it. Being part of the IOP network, being in such a great location and having the support of the IOP business and innovation team in the same building has been a huge support."

Advice for other entrepreneurs

Hira’s advice to anyone thinking of setting up a research and development business is: “to not be too guarded - or shy even - about discussing your ideas. The sheer interest and support of intellectually curious people will help you along the way. If you wait until investor meetings or potential client meetings to have those difficult conversations about what you are working on, those conversations can go poorly.

“If you are open to talking about what you are working on, and what your aspirations are, in informal dialogue with friends and colleagues, the difficult questions ‘can come out of the woodwork’ and you are prepared for them when they arise in more critical settings.”

Wise words from an inspirational entrepreneur.