Discovering new galaxies and trying to understand dark matter are what drive astrophysicist Joanna Sakowska, studying her PhD at the University of Surrey. She explains how difficult it is to believe you can succeed in physics if you don’t have role models, and how important it is that we value hard work and determination as much as we do "natural ability". 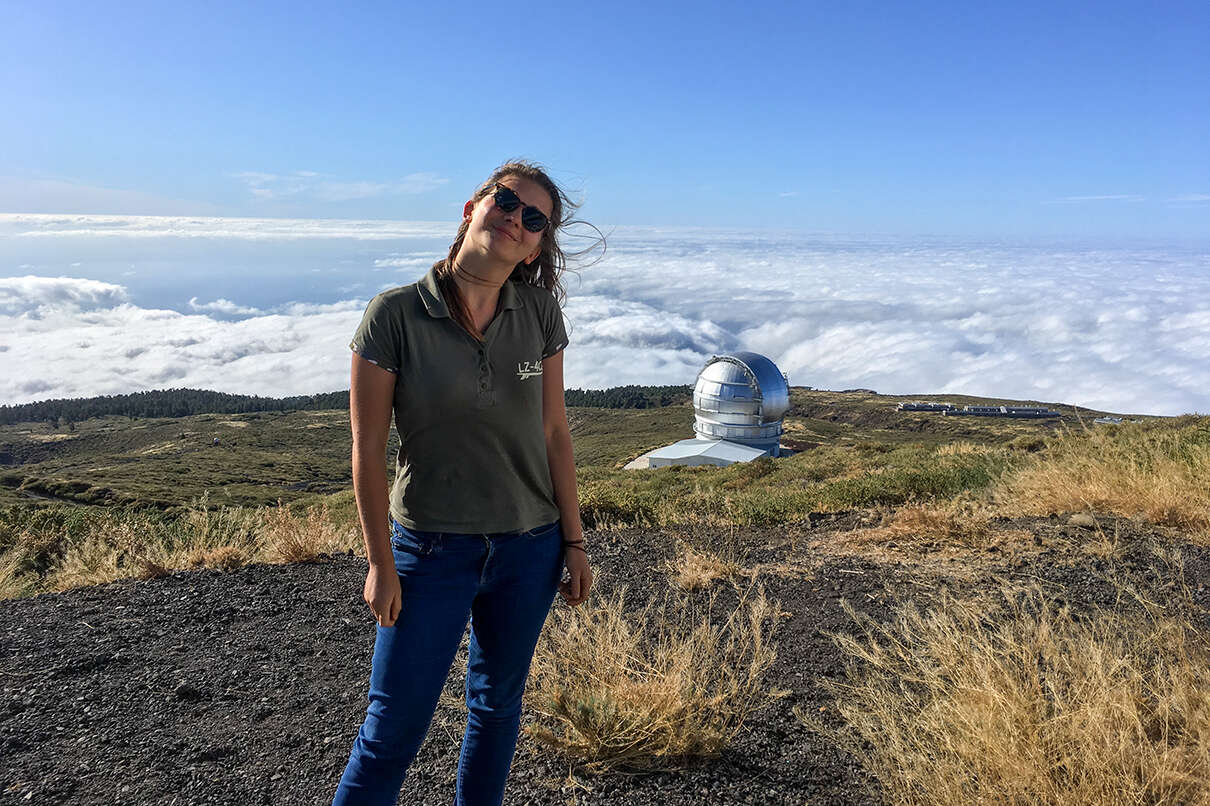 "Now, because of the scholarship, I can continue to follow my passion for physics and astronomy, and keep working on these massive questions, without feeling this guilt that I'm not being supportive."

Tell us about your work - and what drives you
Outside of the Milky Way there are smaller galaxies orbiting us, called dwarf galaxies. Orbiting those dwarf galaxies are even smaller galaxies, called ultra faint dwarf galaxies. Because they're faint, and tiny, they're hard to find and detect. The reason we want to find them is because they're almost entirely composed of something called dark matter. If we study ultra faint galaxies, we can start to put constraints on what dark matter could be, and that's one of the biggest questions in astrophysics today.

For my PhD project I'm going to be using data to try to find some of these ultra faint dwarf galaxies and then perform a study of their chemical composition and star formation history – galactic archaeology – to establish their history and evolution. I hope to be able to use that data to provide new constraints of what dark matter could be.

What really excites me about all of this is that I'm basically discovering whole galaxies – ones that are very close to us and that I can study in great detail.

I think what opened my eyes was when I was about six or seven in Beavers and we did the astronomy badge. I remember looking up at the sky and just thinking that it was so interesting. I found physics hard when I was at school, for various reasons, but I always found it fun. It was exhilarating and so satisfying when I found out how something worked.

What is it like being a woman in physics? What challenges have you faced?
I went to a state school and my physics class was quite small. In fact I think every year only one person continued to study physics at university, and they were always male. I loved the subject, but I really struggled with it.

In physics I'm a minority, as a Polish immigrant, as a woman and coming from a working class background, and you face certain pressures and biases as a result. I think these challenges can really get to you, they can make you feel like you can’t do it. I grew up with quite a closed mindset – that if you’re not naturally talented at something then maybe you shouldn’t do it. The only way I got to where I am was by learning about the “growth mindset”. I had to change the voice in my head to be positive and encouraging, to say ok, maybe I’m not the smartest but I work really hard, and whether you succeed by being smart or by working hard, it doesn’t matter. I basically told myself to shut up and just keep going.

It’s difficult when you don’t have role models to look up to, if you don’t have someone encouraging you and telling you that your hard work will be rewarded. You crumble, you burn out.

My parents hadn’t been to university so didn’t know how it all worked, and that was a bit isolating. I was lucky because they were supportive – there are lots of people whose parents don't understand it and aren't supportive – but it meant I had to go and find opportunities for myself and become a bit of a fighter, become a bit stubborn to understand how to get into physics.

You want role models around you, you want someone from your background to say "I did it, so can you". When you don't have that, it’s so much harder to believe you can do it. I think this is why people give up, and that’s why we need scholarships like this, that say hey, you’ve worked really hard to get where you are and we recognise it. That recognition is very important to motivate people to keep going.

What does winning the scholarship mean to you - and what difference will it make?
This means so much to me. I know people always say that, but I never won anything at school, I was always just struggling to keep up. To get something that recognises how hard my younger self worked to get to PhD level is just incredible.

I remember there was a teacher at school who told me I couldn't take further maths because I wasn't “excellent” enough. Not because I wasn't working hard enough – because I wasn't excellent enough. I thought that was pretty nasty. If I hadn't become really stubborn then I would never have got to where I am.

When you're from a background like mine, there isn’t always money around. There was a part of me, because I'd worked so hard, because I felt really burnt out, that would say why not just quit academia and go and get a grad job? Because of my personal situation I felt guilty about pursuing something I love rather than pursuing a job that could help my family out when needed.

So I had lots of doubts about doing a PhD. I felt selfish, even though my mum told me I should do what I love. Now, because of the scholarship, I can continue to follow my passion for physics and astronomy, and keep working on these massive questions, without feeling this guilt that I'm not being supportive. I think people from minority backgrounds often have this dilemma, and I felt it very strongly.