Founded in 2019, Geoptic Infrastructure Investigations is a spin-out company from the universities of Durham, Sheffield and St Mary's. Using patented technology which detects cosmic-ray muons, the company specialises in non-invasive imaging of critical infrastructure, such as railway tunnels, to identify areas of concern such as hidden voids. 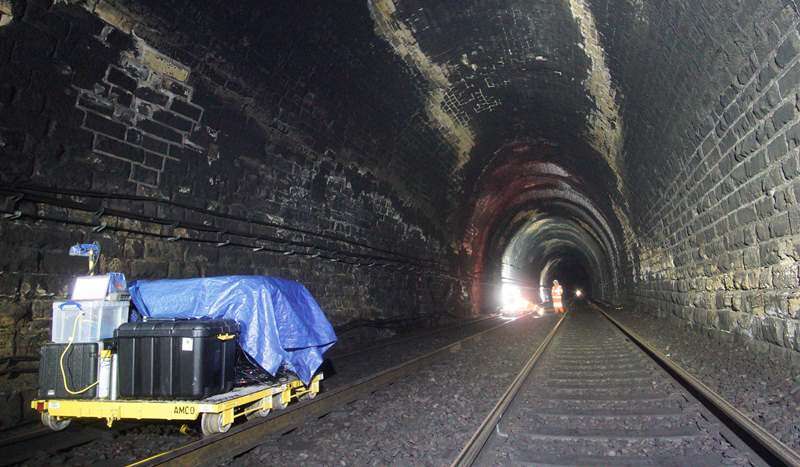 Using this so-called 'muon radiography' technique, it has been successfully demonstrated that a scan comprising, eg short duration (c 20-30 minute) data points along an object such as a railway tunnel, is sufficient to yield valuable information regarding the overburden of the tunnel.

In Geoptic's first successful application of the technique a disused railway tunnel in Alfreton was imaged. In addition to three clearly visible open shafts, Geoptic also discovered a further hidden shaft in the tunnel.

A follow-up investigation which concentrated on imaging this hidden shaft was able to place strong constraints on the precise location, extent and effective depth of the hidden shaft.

Subsequently Geoptic has been contracted to image further 'live' (not disused) railway tunnels to perform checks on tunnel integrity and to search for hidden voiding.

The issue of hidden shafts and voiding, particularly within tunnels, is an ongoing, costly problem for the rail industry. Cosmic-ray muon radiography allows for rapid surveys of potentially hazardous infrastructure, providing detailed, definitive and reliable data allowing clients to make a more-informed choice on maintenance and remediation.

For example, the Alfreton tunnel had previously undergone repeated intrusive drilling into the crown with very mixed results.

Intrusive drilling, usually upwards into the crown of a tunnel, comes at great expense in machinery, personnel and time costs, and has inherent safety flaws caused by potential for collapse and water ingress - putting operatives at unnecessary risk.