Why the line between living and lifeless matter became blurred. 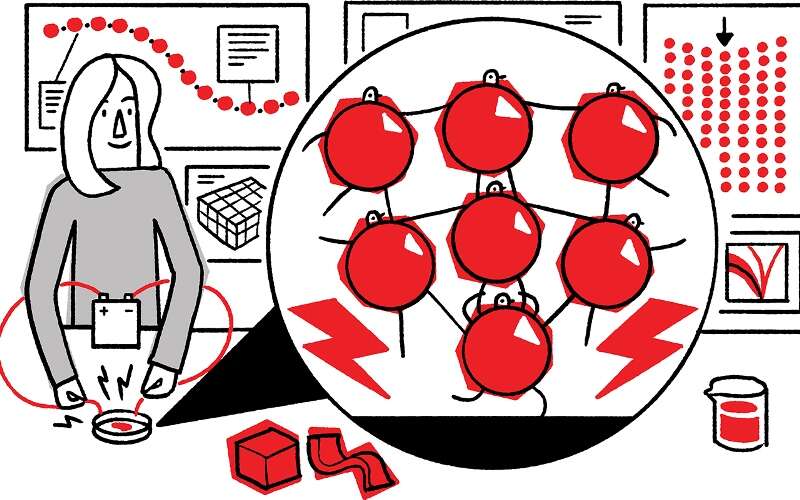 What exists between solids and liquids?

Boiling a kettle is a good demonstration of the phases of matter we are all familiar with from school. The kettle is solid. The water is liquid. And as the temperature rises, some of this water turns to gas billowing from the spout. But is your skin a solid? Skin’s not hard like a kettle. And luckily it doesn’t flow like water. It’s something in between, something squidgy. Physicists refer to it as soft matter.

To give soft matter a more formal definition, it refers to materials that are easily deformed by thermal fluctuations and external forces. This includes everything from the ice cream and butter in your fridge to the paint on your bedroom wall, or even the blood and tissue in your body.

Soft matter behaves differently to ordinary solids and liquids. And to find out why, scientists have to look at what it’s made of at several different levels. Zooming in to individual molecules, they appear random and disordered like a liquid. But at a larger scale, they form ordered structures. And zooming further out to what we can see with our eyes, these ordered structures respond collectively. This gives the material its stable yet flexible characteristics. In essence, disorder and order interact to produce matter like no other.

The intermingling of order and disorder leads to two important properties of all soft matter. First, soft materials exhibit a large response function. It means that a small change in conditions can dramatically alter the properties of the material. Second, under the right conditions and at the right temperature, very complex soft matter structures with peculiar properties can arise all by themselves. This is called self-assembly – a key ingredient for life.

The first step to understanding soft matter was made by botanist Robert Brown in 1827. He watched the irregular motion of pollen granules in water, and gave these rambling particles the name molecules.

Then, in the early 20th century, Albert Einstein and Polish physicist Marian Smoluchowski explained the motion that Brown had observed. They independently concluded it was a result of the pollen being moved by individual water molecules. Their theory used statistical mechanics. And it led to Brownian motion being applied to explain a huge range of dynamics: from the motion of stars in galaxies to the fluctuations of financial markets.

Throughout the 20th century our understanding of Brownian motion, atoms, molecules and statistical mechanics grew at a rapid pace. This led to a deep knowledge of normal gases, liquids and solids. But soft matter proved a harder nut to crack.

It wasn’t until the 1970s that the term soft matter was even coined. Around this time, computers and microscopes were powerful enough, and mathematical and statistical tools sophisticated enough, for physicists to make a bold claim: that the properties of very varied soft materials all stemmed from the interaction of order and disorder on a molecular level.

This realisation grew organically from work by Sam Edwards and Pierre-Gilles de Gennes on liquid crystals and polymers. As the name suggests, liquid crystals have some properties of solids and some of liquids. A nematic liquid crystal, for instance, contains molecules that are free to move any which way, like a liquid. But at the same time these molecules tend to point in the same direction, like a solid. They are found today in most electronic displays, and in nature in our cell membranes and the silk of spiders and worms. Meanwhile, polymers consist of long chains of repeating molecules that can include millions of atoms. These chains do not form crystals, meaning they are not normal solids. Polymers are everywhere from wool, cotton and silk to plastic, nylon and polyester.

Soon, Edwards, de Gennes and other soft matter pioneers branched out to explore further soft materials. These included cement, powders, foams, colloids, gels and many more. But research into soft matter physics exploded when the topic turned to living matter.

With the completion of the draft sequence of the human genome in 2000, biologists had rich data to understand how we are made, and what sets living cells apart from lifeless matter. But it was clear this was not enough. As a result, a new branch of soft matter physics sprang into action to do with the physics of life.

Work in this area straddles physics, chemistry and biology in an attempt to uncover what makes living systems tick. And it turns out that soft matter does a lot of life’s ticking. The body is made of a wide range of polymers. Carbohydrates, lipids and nucleic acids like DNA and RNA are all biopolymers. The estimated 100,000 different proteins inside us all are polymers as well.

Figuring out the complex relationships between these different biological systems is daunting. But it is made easier by soft matter physics. This is because many of their properties are shared simply because all polymers are long strings or balls performing Brownian motion.

Through these studies, it has become clear that the important soft matter property of self-assembly plays a leading role in life processes. Viruses, collagen fibres, the intracellular cytoskeleton and DNA replication have all been found to rely on self-assembly. Other soft matter qualities are now known to control the structure and dynamics of living cells. And they also drive motor proteins like the muscle protein myosin, which plays a big part in contracting muscle fibres.

These new insights about living systems offer the inspiration needed to build complex soft matter of our own. Scientists treat cell biology as nanotechnology that works. So simpler self-assembled nanomaterials have been realised as nanowires, nanotransistors and nanosensors in the electronics industry, with other more complex structures being actively pursued for various applications.

But with these and other inanimate soft materials sharing many of the properties of living systems – like growth, shape forming and healing – the question ‘what is life?’ remains unanswered. It will take the collective effort of the whole scientific community to solve that mystery!

A. In 1970, a close collaborator of Pierre-Gilles de Gennes named Madeleine Veyssié coined the term soft matter as a joke – in French, ‘matière molle’ has a double meaning. Despite its inauspicious beginning, the term stuck. That is, apart from in the US where soft matter is described as complex fluids.

Q. Why is soft matter classed as condensed matter?

A. For physicists, condensed matter is any large collection of interacting atoms that compose a material. Therefore, solids, liquids and soft matter are all condensed matter.

Q. When were liquid crystals discovered?

A. Liquid crystals were accidentally discovered in 1888. Austrian botanist and chemist Friedrich Reinitzer had extracted cholesteryl benzoate from carrots, and was testing the resulting substance. This investigation revealed that the substance had two melting points, turning into a cloudy and then clear liquid. He also noticed it reflected polarised light and could rotate the light’s polarisation direction.