How did a young physicist change our ideas about space, time and gravity forever? 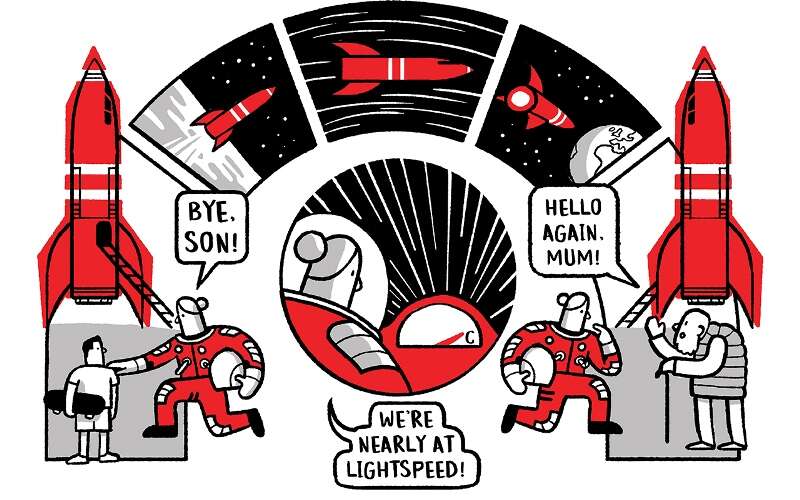 How does gravity work?

When Albert Einstein was born in 1879, Isaac Newton’s idea of how gravity works had been around for nearly 200 years. It explained everything to do with gravity’s pull, from how, when dropped, a cannonball and an egg will hit the ground at the same time, to why we don’t float off into space.

Newton’s theory explained gravity in terms of a force of attraction between two masses. But cracks were showing in Newton’s gravity ideas well before Einstein, in his early twenties, started seriously thinking about how the universe worked. The biggest of these problems was that Mercury’s orbit was a bit off what it should be. There was a mysterious flaw in Newton’s perfect clockwork universe.

Einstein solved the mystery by slowly peeling away most of Newton’s assumptions. The first of these was that space and the passage of time are separate and set in stone. In his special relativity theory, Einstein instead showed that the laws of physics and, crucially, the speed of light are the things that are constant.

Fixing these meant that time and space could vary – and were two sides of the same ‘spacetime’ coin. This led to some wacky, but real, consequences that become more obvious when we get near the speed of light. For example, a fast-moving person measures time passing more slowly than a relatively stationary one. And a fast-moving object appears shorter than a slow-moving one.

Special relativity also produced the most famous equation ever written: E = mc2. It says that the energy (E) associated with an object – an atom, a person or a whole galaxy – is equal to its total mass (m) multiplied by the square of the speed of light (c). As the speed of light is about 300,000 km s-1, this means there is a whole lot of energy tied up in any mass. Knowing about this energy ultimately gave us nuclear power plants – and nuclear bombs.

The theory was profound, but Einstein knew it wasn’t the whole story. It only applied to a world moving with constant speed and didn’t take account of gravity. Solving these two problems took Einstein almost a decade. But when he did, in 1915, it changed everything we thought we knew about the universe.

Special relativity proved how space and time are not fixed and instead part of the same thing. In his general relativity, Einstein showed that the geometry of spacetime is not fixed either. Spacetime is connected to matter: it tells matter how to move and matter tells spacetime how to curve.

Finally, Einstein had a recipe to explain gravity. It wasn’t the force Newton thought it was; in fact it wasn’t a thing at all. Gravity was just the curvature of spacetime. More massive objects bend spacetime more, and so have a stronger gravitational pull.

Einstein used his new equations to finally explain the mysterious mismatch in Mercury’s orbit. But that would never be enough to convince the scientific world. So he proposed two further tests. One involved a confusing phenomenon called gravitational redshift that was only proved in the 1960s. The other was about how light from a star is bent when it travels past another star. Einstein predicted the bending would be twice as strong as it would be if Newton was correct. He only had to wait four years for someone to find out who was right.

During a total solar eclipse in 1919, Arthur Eddington and a group of astronomers set up some telescopes in Brazil and on the island of Príncipe off the west coast of Africa. They measured the position of the bright Hyades star cluster just as the eclipsing Sun was crossing over it. Comparing where the cluster should have been with where they observed it, they had their answer: Einstein was correct.

The morning after Eddington announced his findings, Einstein’s face was plastered over the front pages of the world’s newspapers. Eddington’s technique of observing the bending of light around massive objects is now called gravitational lensing. It’s used today to try to understand dark matter and the expansion of the universe.

With German mathematician Emmy Noether removing any remaining doubts about how the maths stacked up – by revealing a peculiar but valid kind of symmetry in general relativity unlike all previous theories – relativity was slowly embraced by the scientific community and public alike. It has since opened our eyes to black holes and the big bang, shown us that astronauts age slower than people back here on Earth and even crept into the technology we use every day.

Of course, most scientists accepted Newton’s gravity for centuries before more and more precise experiments managed to poke holes in it. So for the past 100 years harder trials have been devised to put relativity through its paces. So far, it has passed them all with flying colours.

One of these captured people’s imagination recently. The test asks a simple question: do gravitational waves exist?

Gravitational waves are caused by catastrophic cosmic events like colliding black holes. The sheer power of these events triggers ripples in the fabric of spacetime that fan out at the speed of light through the universe. What this means is that as the gravitational wave washes past, any object – be it a person or a planet – is distorted, stretching and squeezing in the wave’s direction.

Einstein’s equations predicted gravitational waves would exist. But Einstein himself didn’t believe it. And it wasn’t until after his death in 1955 that other theoretical physicists showed that on this occasion he was wrong. But even then, another 60 years of scientific progress were needed before a gravitational wave was finally directly detected.

The feat was achieved at LIGO – the Laser Interferometer Gravitational-Wave Observatory. LIGO involves over 1000 scientists working in more than 90 institutions from 15 countries. It is actually two detectors, one in Louisiana and the other in Washington. Each detector works by splitting a laser beam and firing it down two identical 4 km tunnels arranged in an L shape. The laser light is then reflected back and put back together.

Normally, nothing unusual happens. But if a gravitational wave passes by, one of the tunnels is stretched and the other squeezed a tiny amount. Although the change is less than the width of an atom, it can be seen in the recombined light. Results are then compared with the other detector to confirm the measurement.

On 14 September 2015, LIGO sensed one of these waves for the very first time. It had come from roughly 1.3 billion light-years away where two ancient massive black holes span round each other before violently merging together, sending a shudder through the universe. Since then, LIGO and its Italian counterpart Virgo, have picked up five more of these cosmic mergers.

Gravitational wave astronomy like that being done by LIGO and Virgo opens up a whole new window to the cosmos. It gives astronomers a fresh set of eyes to explore parts of the universe, like black holes, they thought they would never directly see. And it may even allow scientists to hunt for mysterious dark matter and dark energy – and so gain a deeper understanding of the rules governing our universe.

Q. Who coined the phrase ‘theory of relativity’?

A. Albert Einstein refers to the concept of relativity in his 1905 special relativity paper, but he never calls it a theory. It was German physicist Alfred Bucherer in 1906 who first used the phrase while criticising Einstein’s ideas.

Q. What did Einstein win the Nobel Prize for?

A. Nothing to do with relativity, as the Nobel Committee deemed relativity unproven!  Instead he won it for explaining the photoelectric effect, a phenomenon in which electrons are emitted from a metal sheet only under certain illuminations. The paper – published the same year as his work on special relativity – introduced the concept of photons, and is what makes today's solar panels work.

Q. When was the first gravitational wave detected?