Why thinning sheets to the width of an atom can turn them into super materials. 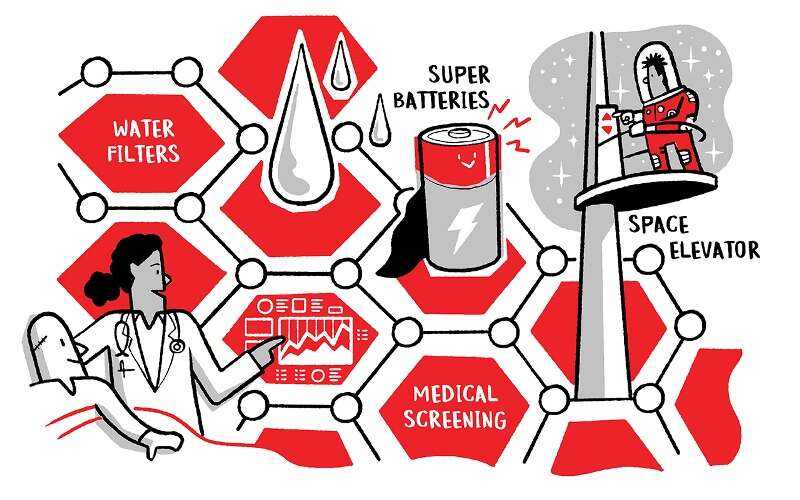 Will nanotechnology change the world?

Though the term nanotechnology was first uttered in 1974 by Japanese scientist Norio Taniguchi, societies had unwittingly been using nanotechnology for centuries.

Ancient Hindus, for example, created nano-sized powders of metal, minerals and jewels to treat incurable diseases. And scientists found their wootz (crucible) steel had a complex nanoscale structure made up of cylinders of hexagonally-arranged carbon atoms that formed through a long lost blacksmith’s process. This steel was used to fashion super sharp and tough Damascus blades.

Elsewhere, Roman and medieval craftsmen used metal nanoparticles to create a glittery shimmer in glazed pottery and stained glass windows. The most stunning Roman example is the Lycurgus Cup. Gold and silver nanoparticles strewn throughout the glass material make the cup appear red or green depending on the direction from which light is shone on it.

Yet these amazing artefacts were produced through a process of trial and error, with no knowledge of why the materials had such interesting properties.

It took the 20th century’s deep understanding of how the elements interact and how atoms function to remove the guesswork. And it took the 21st century’s technology to start to realise nanotechnology’s full promise.

Nanotechnology today is all about manipulating material at the atomic and molecular scale to create new functions and properties. But for most of the 20th century this was simply impossible – the tiny scales involved were out of reach of the microscopes of the time.

This all changed in 1981 with the invention of the scanning tunnelling microscope. It uses a tiny electric current and a very fine needle to detect the height of individual atoms, allowing scientists to ‘see’ individual atoms.

But scientists soon realised the microscope could do much more than simply see at the nanoscale – it could pick up, move and precisely place atoms, one at a time. In 1989, IBM researchers demonstrated this ability by manipulating 35 individual xenon atoms to spell out the IBM logo.

Armed with the right tools, the age of nanotechnology began.

The nanotechnology age was spurred in large part by computing and electronics, which all revolved around silicon. As our thirst for data grew, silicon electronics needed to become smaller and faster. And as a result, components like transistors shrank from micro to nano size, alongside new quantum devices that could manage and store more and more information.

Outside silicon computing, what filtered through to society was mostly new materials made of nanoparticle powders. But this still led to better products in every conceivable industry. These range from anti-bacterial products in children’s toys, to new lipsticks and sunscreens, to better engine oil in cars.

Though nanotechnology products certainly outperform regular materials, they are not yet world-shattering. But it’s the properties of nanoscale materials – so different and often superior to normal materials – that continue to inspire researchers to explore them.

Carbon nanotubes – a few nanometres wide and up to several millimetres long – were predicted, made and studied by the ‘queen of carbon science’ Mildred Dresselhaus, in the mid-20th century. But their potential was only acknowledged in 1991 when Japanese scientist Sumio Iijima observed them.

Carbon nanotubes have unique properties that are useful for many applications. For example, they are being used to purify water. Their size, surface area and adsorption properties make them ideal for building membranes that filter contaminants and salts from water without using chemicals, heat or power.

Another fascinating carbon nanomaterial is graphene. UK-based Russian researchers Andre Geim and Konstantin Novoselov isolated graphene and documented its miraculous properties in 2004. It is a supermaterial of almost limitless potential. It's ultra-light, ultra-thin and 200 times stronger than steel. It's flexible, transparent and more conductive than copper.

At the time of its discovery, scientists and the public imagined how these incredible properties might lead to futuristic technologies, like flexible smartphones, electronic wallpaper, better solar panels and many others.

And already graphene-enabled devices are starting to seep into general use in society. Graphene products provide clearer audio in earphones, slow wear in car tyres and offer lightweight strength in sports equipment. And continuing research into graphene will no doubt result in thousands more uses for the material.

What makes graphene so special? Like coal, diamond and graphite, graphene is made of carbon – just with a different arrangement of atoms. Graphene’s carbon atoms bind together in an ultra-strong hexagonal honeycomb, with three bonds apiece. This leaves a free electron for each atom, making the material such a great conductor. As the honeycomb structure is not three-dimensional (3D), graphene is what’s known as a 2D material – its thickness is no more than the width of an atom.

Graphene was the first 2D material to be discovered, but by no means the last. Hot on its heels followed stanene, germanene, silicene and many more. Each is a 2D version of its 3D counterpart, known as bulk material. And each displays new, interesting properties.

For instance, stanine is made of tin atoms. It’s an even better conductor of electricity than graphene. And molybdenum disulphide (MoS2), mainly used as a lubricant in its bulk form, has 2D properties that surpass graphene in many respects. This makes it particularly well suited to flexible electronic applications.

Combining and stacking these 2D materials in different ways and forming new shapes at the nanoscale – like tubes, ribbons, wires and balls – provides an almost limitless number of potential applications for 2D materials. And when combined with other nanotechnologies the outlook is even brighter.

But will nanotechnology change the world? Many researchers think it could be the key to solving one of our toughest global challenges: climate change by pulling CO2 out of the atmosphere and converting it into useful products. Already small-scale nanoCO2 harvesters have been proven in the lab.

Or it may help to reduce our reliance on fossil fuels. Scientists are developing nanotechnology that makes solar cells cheaper and more efficient, and allows electric car batteries to store more energy. Other ideas include using new nanomaterials to produce energy from movement, light, temperature, glucose and other sources. But if past form is anything to go by, nanotechnologists will find climate change solutions in the most unexpected way.

Q. When was graphene first made?

A. A surprising fact is that graphene has been with us for centuries. In 1560, Italian couple Simonio and Lyndiana Bernacotti made the first graphite pencil. We have been drawing layers of graphene on parchment and paper ever since. We know this because in 2004, Andre Geim and Konstantin Novoselov isolated graphene and measured its properties for the first time. To do this, they used a piece of sticky tape to peel graphene flakes off a chunk of graphite. The cheapest Nobel Prize winning experiment ever!

Q. Is Richard Feynman the father of nanotechnology?

A. Feynman’s famous 1959 lecture ‘There's Plenty of Room at the Bottom’ is often credited as being the spark that lit the nanotechnology flame. However, the lecture was not influential on the early figures working in the field. If anybody deserves the crown it is Gerd Binnig and Heinrich Rohrer, the IBM Zürich physicists who invented the scanning tunnelling microscope.

Q. After the world’s smallest picture, did IBM go for any other tiny records?

A. Yes. In 2013, IBM released the world’s smallest movie. Called ‘A Boy and His Atom’ the two minute movie was made by moving single carbon atoms around a copper surface. They are currently building the world’s smallest computer. Only 1 mm x 1 mm, smaller than a grain of rock salt, it will have the power of an x86 chip from 1990.