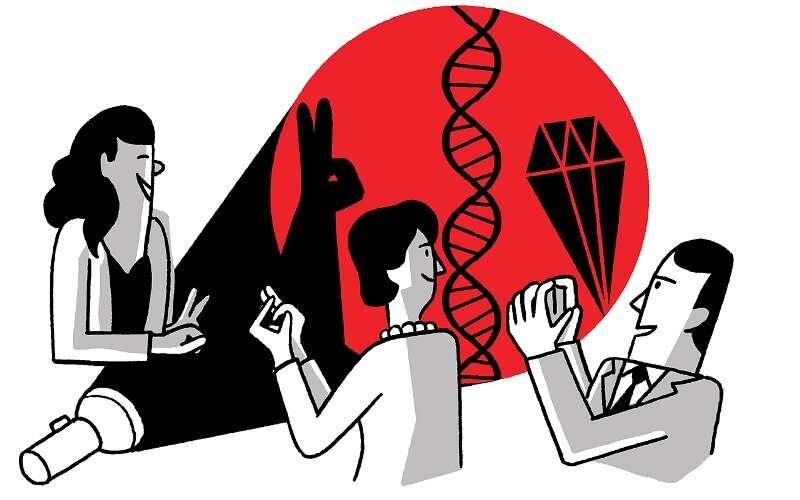 How can we see the very small structure of things?

It may not be the most familiar branch of science to everyone, but crystallography is one of the most important techniques in helping to understand the world around us. Crystallographers can work out the atomic structure of almost anything. And they use this knowledge to answer why things behave the way they do.

Crystallography reveals why diamonds are hard and shiny and why salt melts in the mouth. But the technique doesn’t just look at naturally-occurring crystals. Almost any material can be crystallised. This means crystallography can be used to understand how the immune system fights off viruses. Or it can be used by robotic rovers to search for hints of life in Martian soil samples.

The discovery of crystallography

The story of crystallography dates back to 1912. German physicist Max von Laue and colleagues were experimenting with mysterious X-rays – scientists were still not entirely sure if they were electromagnetic waves like light and radio waves – and various crystals. By shining the X-rays through the crystals and recording the resulting scatter of radiation on photographic plates, they made two startling discoveries. First was that the X-rays diffracted, or spread, proving that X-rays were waves. Second, these rays diffracted in particular directions depending on the nature of the crystal.

Many saw von Laue’s results as conclusive proof that atoms are arranged in the shape of a lattice in crystals. This meant crystals consisted of a pattern of identical groups of atoms repeated periodically. But it took father and son team William Henry Bragg and William Lawrence Bragg to prove it. In the process, they showed that the results had a much deeper significance. Through theory and experiment, in 1913 the Braggs discovered that X-rays could be used to determine the positions of atoms within a crystal accurately. They demonstrated the power of their technique by unravelling the three-dimensional crystal structure of a diamond.

It soon became clear that crystal structure governs most physical properties of matter. Yet the Braggs’ technique only worked on large single crystals.

In 1916, Peter Debye and Paul Scherrer found a solution. Their powder method allowed much smaller crystals to be analysed. Combined with advances in analysis methods and new ways of crystallising various materials, X-ray crystallography was ready to become a central tool in deciphering the mysteries of the world around us.

Nowhere has this tool benefited society more than in health and medicine. And no one has contributed more to the field than Dorothy Hodgkin.

In a long and distinguished career, Hodgkin developed techniques – still applied today – which she used to solve the structures of numerous complex biological molecules. Among them were penicillin in 1946, a crucial insight that sparked the creation of antibiotic treatment and insulin in 1969, which has helped to understand and treat diabetes.

Elsewhere, using crystallographer Rosalind Franklin’s data, James Watson and Francis Crick are credited with discovering the double helix crystal structure of DNA in 1953. Their model serves to explain how DNA replicates and how hereditary information is coded on it.

Less than a decade later, John Kendrew and Max Perutz were the first to work out the inner workings of proteins. Since then, the crystal structures of tens of thousands of proteins have been determined using X-ray crystallography.

Together, these advances in the mid-20th century set the stage for today’s crystallographers to fathom how complex and tiny biological structures are put together, and find new ways of treating disease.

X-ray crystallography remains a crucial technique for this mission. But others have been added to gain further insight into biological molecules. One of these uses synchrotron radiation. Essentially, this is still x-ray crystallography, but the extremely powerful x-ray beam is produced by slowing down electrons or positrons travelling in a particle accelerator.

With nuclear magnetic resonance as well, researchers have an arsenal of different ways to examine the molecules that make up the cells of an organism. One of the key recent achievements from this multi-pronged approach was made by Venkatraman Ramakrishnan, Thomas Steitz and synchrotron crystallographer Ada Yonath. The trio managed to determine the structure of the ribosome – a complex particle responsible for producing all proteins in living cells – and the way antibiotics disrupt it. This insight will help to tackle the growing resistance of bacteria to the antibiotics Dorothy Hodgkin helped make possible over 60 years ago.

Crystallography’s achievements have not been limited to improving human health. It has become the leading technique for studying the atomic structure of materials and how this relates to their properties.

Applications range from measuring strain in a plane’s wing to helping to conserve King Henry VIII's flagship the Mary Rose.

And crystallography is also a means of discovering and characterising new materials. In 1982 crystallographer Dan Shechtman discovered an unusual crystal that was ordered but not periodic. Naming it a quasi-crystal, this novel type of crystal has since been used in surgical instruments, LED lights and non-stick frying pans. More recently, crystallographers have been dissecting the structure of new two-dimensional materials like graphene – helping explain their unique and often useful properties.

Given that most, if not all, of the world’s greatest challenges will be tackled by developing new materials and gaining a better understanding of processes at the atomic level, crystallography will remain a central tool for scientists worldwide long into the future.

Q. Whose Nobel medal was melted to stop the Nazis discovering it?

A. Max von Laue had sent his Nobel Prize gold medal to Niels Bohr's Institute of Theoretical Physics in Copenhagen for safe keeping when Nazism rose in Germany. But in 1940, Nazi Germany invaded Denmark. To protect von Laue from repercussions, Hungarian chemist George de Hevesy dissolved the medal and placed the resulting solution on a shelf in his laboratory. In 1950, de Hevesy sent the raw metal back to the Swedish Academy in Stockholm, who then recast it and presented it to von Laue a second time.

Q. Why was the discovery of DNA’s structure controversial?

A. Although not officially credited with taking part in the work, Rosalind Franklin had taken X-ray diffraction images of DNA and suggested the helical structure prior to James Watson and Francis Crick’s discovery. The images she had taken were shown to Watson and Crick without her knowledge or approval. Both Watson and Crick later acknowledged Franklin’s vital contribution, and that they used her data and that of Maurice Wilkins to develop the hypothesis. However, by the time Watson, Crick and Wilkins won their Nobel Prize for discovering the double helix, Franklin had sadly died.

Q. Beyond their scientific achievements, why were the Braggs ahead of their time?

A. Both Braggs built up large research groups that were highly unusual for their time – they contained a large proportion of women. Out of 18 of William’s students, 11 were female. One of these students – Kathleen Lonsdale – went on to become the joint first woman to be admitted to the Royal Society, the first female professor at University College, London, the first woman named president of the International Union of Crystallography, and the first woman to hold the post of president of the British Association for the Advancement of Science. In addition, Lawrence was a science communication pioneer, instituting a series of lectures for schools attended by some 20,000 schoolchildren per year.