What is happening in the layer of the atmosphere closest to us?

We feel the effects of the weather and air pollution every day but how can we better understand the environment around us? How does the environment within a city differ from the countryside and why is this important to understand? 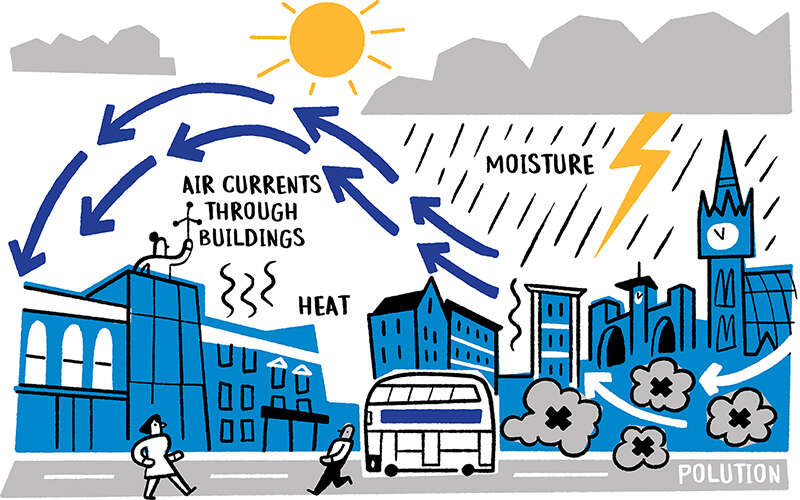 On the Institute of Physics building roof in London is a mast with instruments to measure continuous aspects of the atmosphere – temperature, humidity, wind speed and so on.

This is important in a city as these variables are often very different from the surrounding countryside. The instruments measure the lowest part of the ‘boundary layer’ which is influenced by the city buildings, traffic and people. The urban boundary layer grows and collapses each day depending on the large-scale weather conditions.

It’s hot in the city

The IOP building has several design features which control its temperature. For example:

Instruments on the tower can be used to monitor how much the building warms or cools and the local atmosphere.

Between buildings air temperatures tend to be warmer than the surrounding open countryside. This is the so-called ‘urban heat-island’ effect.

When the wind blows

Up on the roof is another important instrument, a sonic anemometer. This uses sound waves (at wavelengths we cannot hear) to measure wind and temperature but also turbulence, momentum and heat fluxes.

Knowing how air is moving allows us to understand how pollutants such as carbon dioxide and motor vehicle emissions are transported around the city.

A network of instruments

The instruments on the IOP roof feed data to computers at the University of Reading, which contributes to a worldwide network of monitoring stations.

These allow meteorologists to better understand how the local climate within cities depends on human activities and how adverse effects such as heat islands and atmospheric pollution can be reduced.