Alongside doing a regular lateral flow test, or a PCR test if you have symptoms, simple checks - such as filling out health questionnaires and taking people’s temperature - have been used to help control the spread of the virus. A temperature check may feel reassuring, but is it a reliable way to detect COVID-19?

If you’ve visited shops, a restaurant, your GP or have been to an airport recently, you might have experienced a stranger pointing a futuristic laser gun at your head. Though a regular thermometer in your mouth or other part of your body is the most accurate way to take temperature, ‘temperature guns’ keep some distance between the person checking temperature and the person being tested. They have been used to screen for fevers, a known symptom of COVID-19.

Gadgets like temperature guns and thermal imaging systems are all based on different forms of infrared technology. They rely on the fact that all objects emit electromagnetic waves from their surfaces, like heat and light. And they measure the most intense waves an object or person emits. It turns out that humans emit infrared waves.

Digging into the science a bit more, touchless thermometers can measure the surface temperature of a person because of the relationship between the wavelength of light and temperature. Known as Wien’s law, this relationship is only accurate for a blackbody, an object that absorbs all electromagnetic waves it comes in contact with. 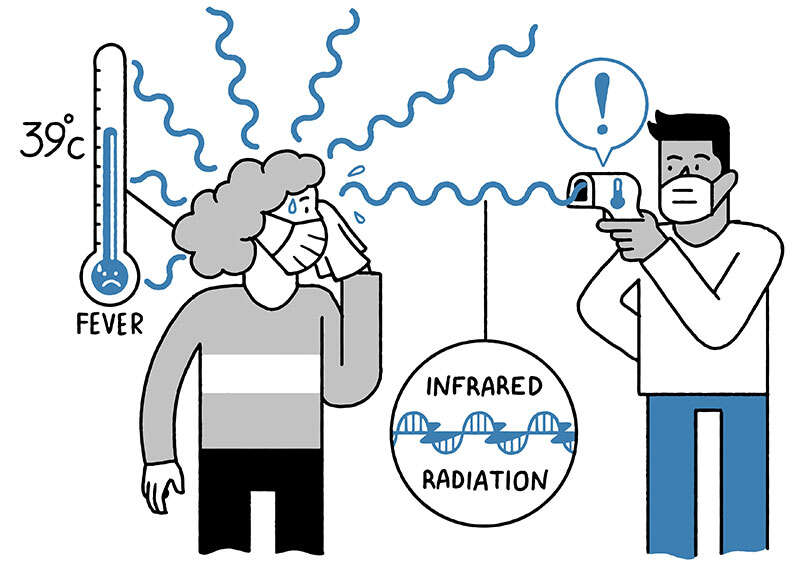 Blackbodies are ideal objects that exist in physics theory but not in the real world. A lot of real objects, from humans to stars, behave like blackbodies, but not quite. This is because objects don’t just emit electromagnetic waves, they also reflect them. To make a temperature reading accurate, you need to account for this mix of emitted and reflected waves. And you do that by giving objects an ‘emissivity’ score; from 0.0 for a perfect reflector to 1.0 for a perfect blackbody. Human skin has an emissivity of 0.95-0.98.

Unfortunately, emissivity is just an approximation, as it varies from person to person. When you factor in the fact that skin temperature does not always exactly match internal temperature, different parts of the face and body are naturally warmer or colder, and the people screening you may use slightly different ways to take your temperature, the chance of an accurate temperature reading is tiny.

But that isn’t the point. Alongside getting people to do a lateral flow test at home, temperature checks are a cheap, easy and quick way to compare the temperatures of lots of individuals and look for those who are warmer than others. They can spot people with a fever that may have been caused by the virus, so that those people can be separated from a crowd and sent for further tests.

China has done this on a massive scale, mobilising and extending its mass surveillance tools to make tracking of people and their health easier during the pandemic. These tools include thermal cameras attached to public buildings or drones to scan crowds for people with a fever, and smart helmets worn by epidemic control personnel to allow automatic temperature checks of anyone within a five-metre radius.

This sounds like a solid plan to track down and isolate infected people. But medical experts warn that a fever is not a good gauge of whether a person has COVID-19. All infected people go through an incubation phase lasting anywhere between two and 14 days, meaning they have no symptoms but can still potentially spread the virus. After this phase, symptoms vary wildly in different people, ranging from so bad that patients require intensive care to no fever, or even no symptoms at all. Moreover, the people most vulnerable to the virus - over-65s and individuals whose immune defences are low - are less likely to develop a fever because they are more likely to be in poor health generally.

For these reasons, the UK government advises: “There is little scientific evidence to support temperature screening as a reliable method for detection of COVID-19… especially if used as the main method of testing.”

Where temperature checking can provide value is as one part of combined technologies that assess many different factors in a person’s health. For example, Urs Schneider and colleagues at the Fraunhofer Institute for Manufacturing Engineering and Automation in Stuttgart, Germany, developed a remote ‘Access Checker’ placed at the entrances of hospitals. The Access Checker adds a heart and breathing rate monitor to temperature screening to detect fever, increased pulse rate and fast breathing. Like temperature guns, it measures infrared radiation emitted by a person’s skin to estimate body temperature, but it also detects body motions linked to breathing and blood flow using a micro-Doppler radar system that bounces microwaves off the person being tested.

Also in Germany, a smartwatch app that gathers vital signs like pulse, temperature and sleep has been used as an indicator for whether citizens are symptomatic of the virus since April 2020. It has helped to identify COVID-19 ‘hotspots’ as they emerge. And in the US, Care.ai introduced a screening system at Tampa General Hospital that uses camera devices to check temperature as well as clues hidden in people’s faces, like sweating and discoloration, helping to identify potential COVID-19 spreaders.

Temperature checks may not be effective at detecting infected individuals on their own. But these and many more innovative technologies in the pipeline show that they can be part of multi-symptom checks that promise a better response to this ongoing pandemic and future health threats to society.