How does the Moon affect the Earth?

The Moon is the only object in the night sky that seems like we can reach out and touch it. It looms large over us, reliably cycling through its phases.

But what if the Moon suddenly disappeared? Would our planet be plunged into chaos, or would we not care? The answer is perhaps more subtle than you would expect.

Moon fact: Tides are caused by the gravitational tug from the Moon and Sun. The biggest tide in the world is in the Bay of Fundy in Canada. The difference between low and high tide there can be as much as 16.3 metres.

What if the Moon didn’t exist?

If the Moon were to suddenly vanish like in a sci-fi movie, our nights wouldn’t just be darker, our world would be radically changed – though at first, it would be hard to spot the difference. The most immediate effects of a post-Moon world would be small.

Why a small silvery-looking sphere orbiting 384,400 kilometres away has a profound impact on us here on Earth

Although the lack of eclipses of any kind would be a sad loss, without the Moon’s glare, darker night skies would be great for anyone with a telescope. The full moon is 14,000 times brighter than Venus, the next-brightest object in the sky. No Moon would allow astronomers to enjoy pristine dark skies all year round – only daylight, weather and human-made light pollution hampering the view of space.

For others, the outlook would not be so bright. Coral and certain species of crabs, worms and fish can sense the moonlight from particular phases of the Moon. They use this as a trigger to start species-wide reproduction. How they would react to a permanently Moon-less night sky is unclear.

A bigger instant effect would be on the ocean’s tides. But to understand the impact we need to know about how tides work. Tides are the result of the gravitational tug from the Moon and Sun that the Earth feels. If we disregard the Sun for now, the Earth’s oceans facing the Moon bulge up in response to the lunar gravitational force: a high tide. The difference in gravitational attraction on the near and far sides of the Earth means that, at the same time, there is also a high tide on the side furthest from the Moon. And because the ocean is liquid, between these two high tides there are two low tides. As the Earth is spinning, these high and low tides move across the globe over 24 hours, meaning each coastal location experiences two high tides and two low tides every day.

In reality, it is a little more complicated. The Moon’s 27-day orbit of the Earth means the times at which high and low tides occur change. You have to wait 12 hours plus 25 minutes between each high tide. And the Sun plays its part too. The Sun’s influence on tides is just under half as strong as the Moon’s.

When the Sun, Moon and Earth are all lined up, the Sun and Moon work together to produce ‘spring’ tides (though confusingly they don’t have to happen in spring). During spring tides, high tides are a little higher and low tides a little lower than normal. In contrast, when the Sun and Moon are at right angles to one another, the tides from the Sun partially cancel those from the Moon and we have the opposite: ‘neap’ tides. Here, high tides are a little lower and low tides a little higher than average. Without the Moon dominating this picture, the Earth’s tides would be much simpler, but importantly much weaker. 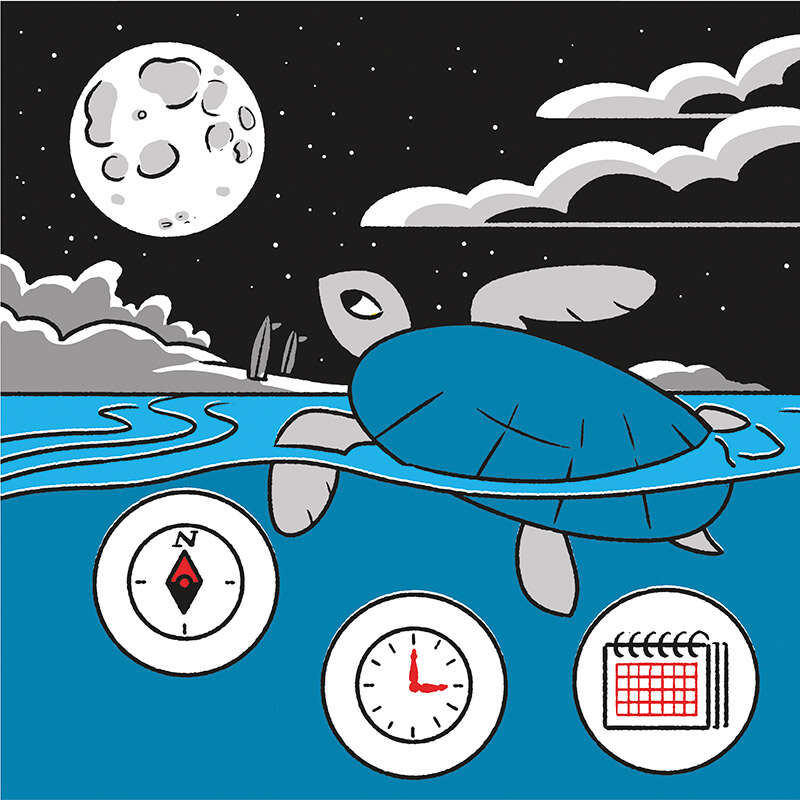 With no strong tug from the Moon influencing the tides, animal life – particularly in the intertidal zone – would have to adapt fast. The intertidal zone is a concentrated band where certain species thrive between the ecological communities of the sea and the land. Weaker tides would cause this band to become narrower, increasing competition and jeopardising survival.

For other species, the tides are even more important. For example, the California grunion fish and various types of sea turtle would be lost if the Moon were to disappear, as they have evolved to be highly attuned to the rising and falling tides. They lay their eggs in the sand and time hatching to coincide with the tides that will give their offspring the best possible chance of survival. This system would break down without the Moon’s influence.

From a human point of view, weaker tides would make fishing for sea life that lives on or near the shore more difficult, as these marine animals move according to the movements of the tide. And it could also wipe out the sport of surfing. Though surfers rely on breaking waves for their fun – which are the result of how wind interacts with waves at the beach – they also follow the tide times avidly. This is because many surfers think that an incoming tide pushes more water towards the beach to make larger waves. Only recently were these surfers proved right about this phenomenon. So we now know that in a Moon-less world, big wave surfing would end.

So, wiping out the Moon would certainly have some good, bad and ugly consequences straight away, but hardly apocalyptic. The biggest impact would take time to manifest: destabilising the Earth’s rotation. Today, Earth’s axis is tilted at 23.4° with respect to our orbit around the Sun. But there is a slight wobble in this spin cycle. The wobble is like the one you see with a spinning top, slowly making the tip trace a circle as the toy spins rapidly around. For the Earth, it’s a rather slow wobble, taking around 26,000 years to go full circle. It’s also quite gentle, moving the Earth’s axis by just 2.4 degrees. But without the Moon to stabilise it, this wobble would become erratic and extreme.

Sometimes, the Earth’s axis would point straight up and down at right angles to the Earth’s orbit of the Sun. In this scenario, seasons would be a thing of the past, and night and day would be equally long all year round. At other times, the Earth would tilt all the way over and lie on its side in relation to its orbit around the Sun. This would mean the poles would be burning hot and the equator freezing cold.

In effect, removing the Moon would spell extreme climate change. There would be huge differences between temperatures and daylight throughout the year, and ice ages would hit different parts of the world every few thousand years. Lucky for us then that the Moon is going nowhere any time soon.

Find out the stories behind the most significant discoveries that have shaped our understanding of the universe.

Read about big ideas in physics