Detecting the Higgs boson completed the Standard Model of particle physics, a theory describing all the known fundamental particles and how they interact.

Do we know how the universe works?

Why we should celebrate the detection of a tiny elementary particle

On 4 July 2012, physicists at the Large Hadron Collider – the biggest machine in the world – announced they had discovered one of nature’s deepest secrets. The Higgs boson had been detected and the Standard Model of particle physics completed. During the announcement, the audience broke out in wild applause. One of the scientists who first proposed the Higgs particle even shed a tear of joy. Why were they so pleased? 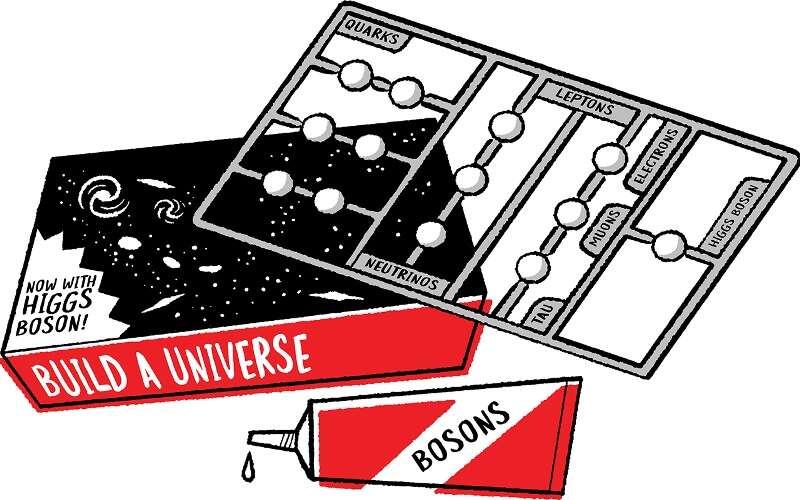 Peering into the microcosmos

By the 1960s it was clear that knowing about the atom barely scratched the surface of particle physics. Exotic particles like muons, neutrinos and antimatter particles had all been discovered. And theories had been developed to explain the forces between these particles and the ways that they combine to make other particles.

Physicists knew there was a whole microcosmos involving hundreds of particles to explore – and more particles to find. But the complex connections between the particles made it hard to make sense of what was going on.

Yet through a collective worldwide effort combining theory and experiment, a picture began to form in the 1960s. This picture reduced all of the known particles down to just a few elementary ones. And by applying a mathematical theorem developed by Emmy Noether in 1918 that links symmetries with nature’s conservation laws to the subatomic world, it placed these fundamental particles into lists and groups, much like the periodic table of elements. This helped particle physicists look for patterns and links. By the mid-1970s, the theory was so well-established it became known as the Standard Model.

Then there were seventeen

The Standard Model consists of 17 fundamental particles. Only two of these – the electron and the photon – would have been familiar to anyone 100 years ago. They are split into two groups: the fermions and the bosons.

The fermions are the building blocks of matter. There are 12 fermions, split into six quarks and six leptons. Of the familiar particles that make up the atom, the electron is a lepton. However, protons and neutrons are not part of the Standard Model because they are bigger particles made out of quarks. All bigger particles and all matter are made out of just quarks and leptons.

Meanwhile, only five bosons are responsible for all of the interactions between matter. They carry three of the four fundamental forces in nature: the strong force, the weak force and electromagnetism.

The strong force is carried by the aptly named gluon. It holds quarks together to make protons, neutrons and more exotic large particles.

The weak force causes radioactive decay thanks to the W and Z bosons.

Finally, the electromagnetic force is carried by the photon. It is responsible for magnetism and electricity, but also holds atoms together and even stops us from walking through walls.

The fourth, missing force – gravity – is a pretty important one in our daily lives. But at the atomic scale it’s so weak it can be ignored in almost all situations.

This leaves the last boson, the Higgs boson.

The Higgs boson was predicted because it answered a burning question. Why do some fundamental particles have mass but others don’t? In 1964, six scientists working in three independent groups proposed the answer. An interaction with a new particle that only some particles feel must give them mass. This new particle was later named after one of the six scientists, UK physicist Peter Higgs.

For the Higgs particle to give mass to others it would need to permeate the universe. All of space would be filled with a sea of virtual Higgs bosons – now known as the Higgs field – that pop in and out of existence. In the theory, while massless photons and gluons ignore the Higgs field, quarks, electrons and other particles interact with it, which is why these particles have mass.

Although to many in the 1960s the idea was outlandish, over time the Higgs field and boson were largely embraced by the scientific community and firmly established in the Standard Model. But there was a problem: the Higgs boson had still not been observed.

By the 1990s, powerful particle accelerators were on the hunt for the Higgs boson. These accelerators speed up charged particles like protons and electrons using electric and magnetic fields. Then they smash these particles into a target or into other particles. The collisions produce a wide variety of particles, and in some cases, new ones.

Detectors surrounding the collision point record the aftermath of colliding particles for a pattern of decay products. From this, the masses of the particles produced in the collision are calculated. Unfortunately though, by the end of the decade they had found every conceivable fundamental particle apart from the Higgs boson.

But then came the Large Hadron Collider (LHC), the most powerful particle accelerator ever built. The LHC is a 27 km underground ring straddling the border between France and Switzerland near Geneva. About 9000 superconducting magnets accelerate two bunches of protons to 99.9999991% the speed of light in opposite directions before smashing them together. This creates some 600 million collisions per second.

It took almost four years of proton smashing for LHC physicists to have the data and confidence to announce they had found the Higgs boson. And when they did, Peter Higgs was the physicist in the audience who shed a tear. The announcement provided the final piece of the Standard Model puzzle. The last remaining particle predicted by the theory had been found. It confirmed our understanding of the fundamental building blocks of the universe was correct.

Beyond the Standard Model

Now complete, the Standard Model gives a remarkable insight into the fundamental structure of matter and the universe itself. But it does not explain everything. Where, for example, does dark matter fit into all this? And why is the universe made of matter and not antimatter?

Another big question is how to slide gravity into the Standard Model. Although the Standard Model describes the three fundamental forces important at the subatomic scale, it doesn’t include gravity. In the subatomic world, gravity is absurdly weak. The gravitational attraction your average pair of protons feel is weaker than their electromagnetic repulsion by a factor of 1036. But when things are very massive and very small – like in a black hole or during the first moments of the big bang – gravity starts to become important.

Gravity is described by Albert Einstein’s general relativity. So the logical way forward is to somehow add relativity’s description of gravity to the three forces of the Standard Model. Simple, right?

Wrong. According to Einstein, gravity is not a force; it’s a property of spacetime, meaning gravity itself is incompatible with the other forces. Further, the maths behind relativity is completely different to the maths that gives us quantum mechanics and the Standard Model. Simply put, relativity and the Standard Model don’t mix. And attempts to do so almost always result in nonsensical answers.

However, in the past few decades, different ideas have been proposed that go beyond relativity and the Standard Model. They all attempt to construct a theory of everything. And each one tries to unify gravity with the three other fundamental forces in a different way. Loop quantum gravity, for example, aims to quantise the fabric of the universe – spacetime – itself. And string theory pictures the vibrations of tiny strings of energy generating both matter and spacetime.

Scientists at the LHC and other particle accelerators around the world will continue to look for particle collisions that match those predicted by these theories. They are hunting for hints that supersymmetric particles, gravity-carrying graviton particles or extra dimensions exist. And they will also work alongside astronomers to find answers to the other questions that the Standard Model fails to address. For now though, it is worth celebrating the theory of almost everything – the Standard Model.

Q. Why do some people call the Higgs boson the God particle?

A. The name was first used by physicist Leon Lederman in the title of a popular book in 1993. According to Lederman: “Why God Particle? Two reasons. One, the publisher wouldn’t let us call it the Goddamn Particle, given its villainous nature and the expense it is causing. And two, there is a connection, of sorts, to another book, a much older one. . . .” Despite the scientific community roundly criticising the name, it has stuck.

Q. Does the Higgs field give mass to all matter?

A. The Higgs field does give mass to elementary particles like quarks and electrons. But it does not provide all mass to all particles, not even particles made exclusively of quarks. Protons and neutrons, for example, get most of their mass from the strong nuclear force that holds their quarks together.

Q. Why is the Higgs particle called a boson?