Why searching for life on other worlds has captured our imagination for over 500 years. 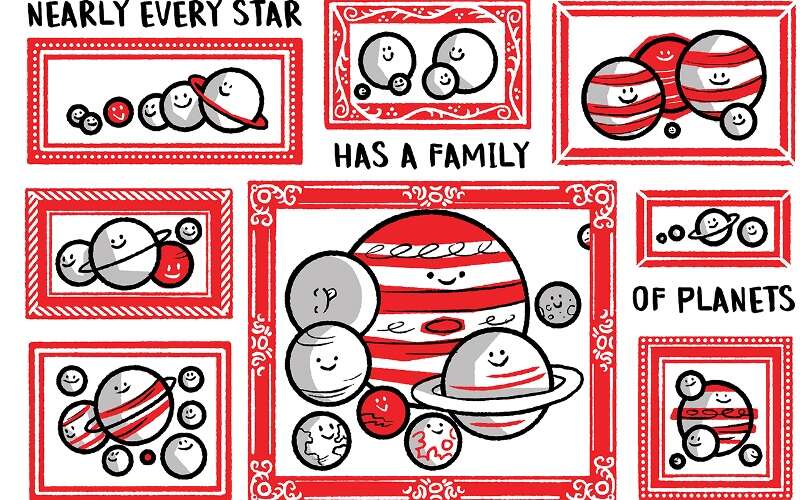 Is anyone else out there?

The question 'are we alone?' excites anyone with even a passing interest in our place in the universe. If we are alone, it makes us unique and precious. If we’re not, the idea of seeking out new life and new civilisations moves from the realm of science fiction to a tantalising possibility.

Centuries of work have shown that our solar system only harbours intelligent life on one of its eight planets, Earth. Astronomers still search for microbial life on Mars and some of the ice moons of Jupiter and Saturn. But in recent years attention has turned beyond the solar system. Today, we know of around 3800 planets orbiting other stars. We call them exoplanets.

These worlds range from rocky super-Earths and gassy mini-Neptunes, to Jupiter-like giants circling close to their parent star. There are rogue planets wandering through the galaxy, worlds orbiting two stars and a planet with rings stretching 200 times further than Saturn’s. Most importantly for the search for extraterrestrial life, there are exoplanets with an Earth-like mass and orbit spinning around Sun-like stars.

Setting the Sun in the centre

The rich variety and abundance of exoplanets we know of today would no doubt thrill Nicolaus Copernicus. Though Ancient Greeks and Indians had proposed the idea much earlier, Copernicus was the first modern scientist to place the Sun rather than the Earth at the centre of everything.

This dealt the first blow to the established belief of an Earth-centred universe – and sowed the seeds for the Earth being far from unique in the universe. He came up with his heliocentric theory in 1510 at the age of 37. It explained the motions of the wandering stars – that we now know are planets – in a far simpler way than an Earth-centred universe. But he only published the work near his death for fear of being branded a heretic.

Unfortunately, Copernicus’ solar system made the planets loop round the Sun in perfectly circular orbits. This meant he needed to use complicated circles on circles, called epicycles, to account for the movement of some of the planets. As a result of this – and the established religious dogma of the time – few bought into Copernicus’ heliocentric theory.

In fact, it took centuries for philosophers and astronomers to come round to the idea. In a staggeringly accurate leap of imagination, one of the first was Giordano Bruno. He proposed that the stars were distant suns surrounded by their own exoplanets. He even raised the possibility that these planets could be home to life of their own. The Roman Inquisition judged Bruno’s ideas heretical and he was burned at the stake in 1600.

A similar but less brutal fate awaited Galileo Galilei. A few years after Bruno’s death, Galileo built some of the world’s first telescopes. He pointed them to the heavens and made key observations that backed up a Sun-centred universe. One of the most revolutionary was that Jupiter had moons. If celestial objects circled planets, the Earth could not be the centre of everything. These important scientific advances brought him to the attention of the ever-present Roman Inquisition. In 1633, they found Galileo 'vehemently suspect of heresy'. He was kept under house arrest until his death in 1642.

Elsewhere, first Johannes Kepler, then Isaac Newton and finally Albert Einstein – among many others – exposed the mechanics of planetary motion. Further theories and observations throughout the 20th century explained how the planets formed, what they are made from and what conditions are like on the surfaces of our neighbouring worlds.

This huge body of scientific evidence painted a picture of a desolate solar system, with life’s only outpost our pale blue world. Whether there were worlds similar to the planets orbiting other stars, or even Earth-like planets harbouring life, was hotly debated but ultimately academic. At that time exoplanets were too small, too dim and too far away for us to see them. We would have to wait until technology caught up with theory to find out.

That time came in 1992, when the first confirmed exoplanets were discovered. Astronomers used the Arecibo Observatory in Puerto Rico to find two exoplanets. They were four times more massive than Earth orbiting close to a pulsar –  a superdense, rotating stellar corpse – about 2,300 light-years away. Later finding a third smaller planet in the system, the trio were unpoetically named PSR1257+12b, PSR1257+12c and PSR1257+12d. In 2015, their official monikers changed to Draugr, Poltergeist and Phobetor.

Most of these discoveries were made by ground telescopes via the radial velocity method. Using ultra-precise instruments, astronomers searched for the tiny wobble in the star's speed caused by the planet's orbit.

But this is not the only way to find exoplanets. For locating small and extremely distant worlds, there is the microlensing method, and to hunt for Earth-like small planets orbiting far from their host star, astrometry is the best bet. In special circumstances, deep-probing observatories like the Hubble Space Telescope can directly see the planet itself. Though so far all of the roughly 20 exoplanets seen this way are thought to be lifeless gas giants.

The most successful planet-finding technique is the transit method. This measures the tiny dimming of a star as an orbiting planet passes between it and the Earth. When combined with spectroscopy – the study of how light interacts with matter – the transit method also allows scientists to analyse the wavelengths of light coming from the planet. They have used this to find evidence of atmospheres, liquid water and important molecules for life.

The best example of the transit method in action is NASA’s planet-hunting Kepler space telescope. Launched in 2009, to date Kepler has found roughly 2650 exoplanets, about two-thirds of all the alien worlds discovered.

New space telescopes promise to make this number balloon. ESA’s Gaia telescope that launched in 2013 is a mission to map over a billion stars in our Galaxy in 3D. It is expected to find around 70,000 new exoplanets. And NASA’s TESS space observatory launched in 2018 will likely add another 10,000 to this number.

With upcoming instruments like NASA’s James Webb Space Telescope and ESA’s ARIEL capable of probing these worlds in ever-finer detail in the future, maybe, just maybe, we will finally be able to answer the question of whether we are alone in the universe within our lifetimes.

Q. When did we see the first exoplanet?

A. The first image of an exoplanet was taken in 2004 by the Very Large Telescope in Chile. Named 2M1207b, the planet is roughly five times more massive than Jupiter and sits 170 light-years away in the constellation of Hydra. It orbits a brown dwarf at a distance nearly twice as far as Neptune is from the Sun.

Q. Have we found a planet just like Earth?

A. Not quite, but nearly. In 2014, astronomers revealed the Kepler space telescope had found a rocky planet only 10% larger than Earth orbiting a star roughly half the size of the Sun. Named Kepler-186f, it is 500 light years from Earth. Just a year later Kepler found another planet Kepler-452b. Also a little bigger than Earth, Kepler-452b has a 385-day orbit around a star similar in size to the Sun. It is 1400 light-years away.

Q. What are the signs of life we’re looking for?

A. The first and most important is that the planet is rocky and in what’s called the habitable zone, where temperatures are ideal for liquid water. To figure this out, astronomers decipher the orbit and mass of the planet, and the type of star it orbits. They next want to identify the planet’s molecular makeup. The idea behind this is to pick up signatures of oxygen, water, carbon dioxide and methane in the atmosphere – indicators that the planet might harbour life.