Why the laser went from a solution looking for a problem to a device that impacts almost every aspect of life. 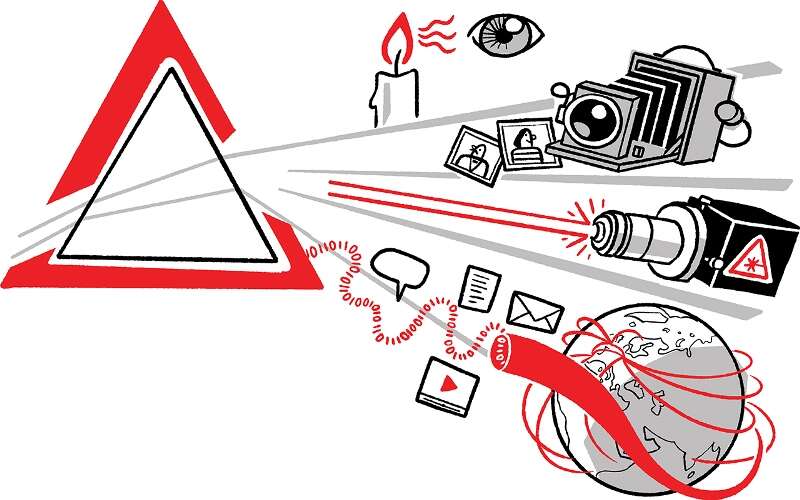 What makes lasers so useful?

Our fascination with light starts at an early age. Some of the first questions kids ask their parents are about light. What are rainbows? Why is the sky blue? What are shadows?

So it’s no surprise that light has captivated philosophers and scientists for millennia. The first real progress in understanding light came in the Islamic Golden Age. In 1027 Muslim polymath Hasan Ibn al-Haytham, also known as Alhazen, wrote the Book of Optics. In it, he presented the latest knowledge about optics in seven volumes. Crucially though, he dispelled the popular idea that light came from our eyes like torches. Instead, al-Haytham proved that it is emitted and reflected from objects and travels in straight lines to our eyes.

Little more was learned about light until Europe’s Scientific Revolution in the 16th century. From then to 1900, huge progress was made. For example, Isaac Newton showed that colour is a property of light and not the medium. Thomas Young revealed the wave nature of light. And James Clerk Maxwell went further, mathematically describing light as an electromagnetic wave. In fact, some believed we had not only mastered light, but learned everything there is to know about how the universe works. Scientist Lord Kelvin claimed: "There is nothing new to be discovered in physics now".

And then came relativity and quantum mechanics. Not only did these towering theories shape physics in the 20th century. They also revolutionised our understanding of light.

Albert Einstein was central to transforming our perception. His special theory of relativity showed that the speed of light was a fundamental constant of nature. Later leading to his general theory of relativity, this work placed light at the centre of our explanation of space, time and gravity. But he didn’t stop there. Einstein’s description of light in quantum mechanics led to one of the greatest inventions of the 20th century: the laser.

Let there be (coherent) light

Almost 40 years passed before scientists figured out how to harness this idea. But it wasn’t in the world’s first laser, it was in Microwave Amplification by Stimulated Emission of Radiation, or MASER for short. Charles Townes and colleagues at Columbia University, USA, invented the MASER in 1953.

The first MASER worked by sending a beam of excited ammonia molecules into a metal box called a resonant cavity. These excited molecules then relax into their ground state, releasing light energy (photons) in the process. The photons repeatedly ping back and forth between the cavity's walls. As they do so, they hit more molecules which also become excited. These molecules then relax and release more photons in a repeating cycle involving more and more molecules. Soon a steady stream of photons bounce from side to side in the box. The output MASER beam is a small amount of the built up radiation. It escapes through a small hole.

The device did much more than amplify waves. The MASER produced microwaves that were all identical, waving in tandem and travelling in the same direction. For the first time, electromagnetic waves had been tamed. But the race to build a similar device using visible light – the laser – was now on.

Townes and several other American and Russian scientists can lay claim to inventing the laser. And long patent battles have proved the answer is not clear-cut. But what is certain is that US physicist Theodore Maiman at Hughes Aircraft Company built the first working laser in 1960.

At first, it appeared that scientists were not sure what to do with the new technology. In fact, the New York Times quoted Maiman as saying: “A laser is a solution seeking a problem”. But research continued regardless.

In the same year as Maiman constructed the first device, two very different types of laser were also demonstrated. What then followed was a rapid-fire series of firsts that formed the seeds of today’s technology. As early as 1961, a laser similar to Maiman’s was applied in medicine for the first time. It successfully destroyed a retinal tumour. In 1962 the laser most familiar to the public was invented. The red GaAsP (gallium arsenide phosphide) laser diode is the basis for today’s red LEDs used in devices such as CDs, DVD players and smartphones. And in 1963, AT&T Bell Laboratories engineer Chandra Kumar Naranbhai Patel invented the carbon dioxide laser. A powerful tool, it is now used for cutting and welding, and as a laser scalpel in surgery.

Three years later, Hong Kong physicist Charles Kao made another bold step. He calculated that optical fibres made from high-purity glass could transmit light signals over long distances. Identifying silica as the medium and lasers as the light source, his work laid the groundwork for the global fibre optic communication network that forms the backbone of the internet.

Since then, lasers have grown into a huge and varied family of technologies that are just as useful in the home as they are in space telescopes. They have revolutionised communications and computing. They have improved commerce, industry and entertainment. And they have allowed pain-free surgery. Most importantly, lasers are still advancing science.

For example, using radiation pressure focused laser beams can form optical tweezers. Invented in 1987 by Arthur Ashkin of Bell Laboratories, these tweezers can manipulate red blood cells, microorganisms and even objects as small as a single atom. They are now widely used to investigate the machinery of life, which is why Ashkin – alongside other laser pioneers Gérard Mourou and Donna Strickland – was awarded the 2018 Nobel Prize in Physics.

Strange as it may seem, other types of lasers can cool and trap atoms. Laser cooling works by carefully arranging two or more crossed laser beams. These beams reduce the atoms’ momentum through continuous absorption and spontaneous emission of photons. As temperature is a measure of a substance's average kinetic energy, less atomic momentum (and therefore less kinetic energy) means a lower temperature. An interesting application of laser cooling is in making Bose–Einstein condensates – a strange state of matter where atoms group together and act like a single huge atom.

In terms of power, new lasers are starting to appear as military weapons, capable of destroying enemy vehicles from miles away. But these portable devices are weak in comparison to the latest research lasers.

For instance, the National Ignition Facility in the US has 192 powerful laser beams. These lasers can create temperatures and pressures similar to those in the cores of stars and giant planets, and inside nuclear weapons. Among other topics, scientists use the facility to understand supernovae, giant planets and black holes.

Meanwhile, the European X-ray Free-Electron Laser Facility based in Germany is the world's largest X-ray laser. This huge device housed in a facility 3.4 km long generates 27,000 super-bright flashes of X-rays per second. The short wavelength of the X-ray light allows this giant microscope to probe the composition and structure of complex biomolecules and materials at the atomic scale. And the short pulses of light mean researchers can watch movies of ultrafast phenomena – like the formation or breakup of chemical bonds – for the very first time.

The next big breakthrough for lasers might come from China. A team from the Shanghai Superintense Ultrafast Laser Facility is building a laser of unrivalled power. They hope it will have enough energy to cause electron/positron pairs to pop into existence. If they do it, the achievement will be a staggering demonstration of quantum mechanics in action and a shining example of how our command of light and matter has changed in just 100 years.

Q. Could lasers be used to fight space wars?

A. US President Ronald Reagan certainly thought so when he proposed the creation of the Strategic Defense Initiative (SDI) in 1983. However, the technology for his space-based anti-missile system proved highly complex and expensive. And the proposed X-ray lasers required too much power.

Q.  When did the public see the first commercial laser?

A. In 1974 a laser was used for the first time in a supermarket barcode scanner. The first product to be scanned and logged was a 10-pack of Wrigley’s Juicy Fruit chewing gum.

Q. Where did laser tag originate?

A. The US military introduced the multiple integrated laser engagement system (MILES) in 1978. It used lasers and blank cartridges to simulate actual battle. Then, inspired by Star Wars, inventor George Carter III created Photon in 1984. It was the first commercial version of laser tag. Photon was highly successful, despite players having to carry 6 kg of battery packs and equipment.