Why knowing where we come from helps us understand the nature of reality. 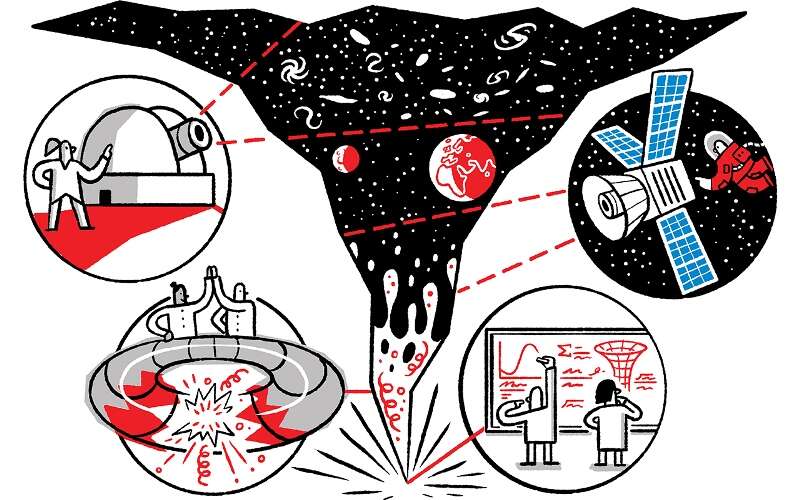 How did the universe start?

Most physicists believe the universe was born in a big bang 13.8 billion years ago. In it, the energy making up everything in the cosmos we see today was squeezed inside an inconceivably small space –  far tinier than a grain of sand, or even an atom. Then, this unimaginably hot and dense cauldron – for whatever reason – ballooned at a terrifying rate.

In the very first second of the universe’s existence, our understanding of what was going on is surprisingly good. We know that the concepts of time, space and the laws of physics very quickly solidified. From there, order started to emerge out of the chaos. First to take shape were subatomic particles like quarks. Then bigger particles like protons and neutrons. About three minutes later, the universe had cooled to 1 billion °C. This allowed protons and neutrons to come together through fusion and form nuclei, the charged cores of atoms.

But after 20 minutes, the universe was no longer hot enough for fusion. What was left was a hot, cloudy soup of electrons and hydrogen and helium nuclei. This stage lasted for about 380,000 years. Eventually, the cosmos cooled enough for electrons to pair up with nuclei and make the first atoms. It then took hundreds of millions of years for the first stars to form and light up the darkness, and even longer for the universe to start to resemble what we see today.

How do we know all this? General relativity describes how space, time and gravity work throughout the universe. Albert Einstein came up with the ground breaking theory in 1915. But it was another physicist, Alexander Friedmann, who studied the equations and made a startling discovery.

Friedmann found that relativity naturally describes a cosmos that is either expanding or shrinking. One possibility he considered was that everything we observe today expanded from a single infinitely dense point. Published in 1922, Friedmann’s work was largely ignored. Five years later, history repeated itself. Belgian priest and astronomer Georges Lemaître did the maths again and concluded that our universe mushroomed from a 'primeval atom'. Just like Friedmann, Lemaître was ignored.

In the end, it took measurements not theories to finally convince many scientists that we live in an expanding universe. Astronomer Edwin Hubble was already world famous for discovering that our galaxy is not the only one. His later observations in 1929 proved that all galaxies are moving away from us and moving faster the further away they are. Space itself is expanding.

This proof was a shock to Einstein. He later admitted that he knew his equations indicated that the universe must be either expanding or contracting when he wrote them. But at the time he didn’t believe it could be true. So he added a term called the cosmological constant to keep the cosmos fixed in place – a fudge he later regretted.

The whisper of the big bang

Despite the mounting evidence, others clung on to a steady fixed universe for decades more. That is, until the accidental discovery of the cosmic microwave background in 1964.

Robert Wilson and Arno Penzias worked at a super-sensitive radio antenna in New Jersey, USA. They were using it to detect a halo of hydrogen around the Milky Way. But the researchers found that everywhere they pointed the antenna, day or night, there was always a faint hum. Over a year, they checked and wrote off many possible noise sources. And to be certain, they tested the wiring, rebuilt parts of the equipment and even shooed pigeons from the antenna. Yet the hum remained. Eventually, physicist Robert Dicke found out about the hum and interpreted it as the whisper of the big bang: the cosmic microwave background.

The cosmic microwave background is left over energy from the universe’s birth that covers the entire cosmos. A faint relic glow from 380,000 years after the big bang, it’s the furthest back we can see with light. Using a variety of probes, we have studied this leftover radiation for decades. Most recently in 2009–13, the Planck spacecraft looked for tiny differences in its temperature across the whole sky. These temperature fluctuations are traces of the seeds from which today’s stars and galaxies grew.

The universe’s dark side

The big bang theory was thought up almost 100 years ago. And scientists and the public have accepted it as the origin of the universe for over 50 years. Yet it still holds many mysteries. Most of these revolve around the fact that what we see doesn’t match what theory tells us. If we go by the evidence, ~95% of the universe is invisible. As a result, physicists have added two dark components that make the maths add up – and must exist if relativity is right.

Dark energy is the more mysterious of the two. It is an unknown phenomenon expanding space everywhere and making the universe balloon at an ever-faster rate. Meanwhile, dark matter, the second mystery, has an opposite binding effect. Astronomer Vera Rubin found compelling evidence for dark matter in the 1970s. From observations of spiral galaxies, she calculated that 90% of the mass in galaxies is invisible and unidentified. Later studies found that dark matter is a dark substance forming a cosmic web throughout the universe. This cosmic web is thought to help form galaxies and prevent them from spinning apart.

The fact they are both invisible explains why the universe appears to be a lot lighter than it should be. In fact, we now think that about 68% of the universe is dark energy and 27% is dark matter. But knowing what dark energy and dark matter actually are will give us a much better understanding of what went on during the big bang.

Physicists are even starting to tackle the big gaping holes in the big bang theory: what came before the big bang? What triggered it? How will the universe end? And is this the only universe?

To answer these questions, we first need to understand how physics worked in those very early moments of the universe’s life, when all of space and time were crushed to a size far smaller than a proton. And this means somehow bringing general relativity and quantum theory together. If it can be done, we might finally understand the nature of reality.

Q. How do we know the big bang happened 13.8 billion years ago?

Q. Does the big bang mean the universe will expand forever?

A. Before the 1990s, there were two ideas. Either gravity would slow down the universe’s expansion and eventually reverse it – leading to a big crunch. Or the universe would keep on expanding forever. When astronomers finally had the technology to measure how the universe’s expansion was changing they discovered that expansion was speeding up. They named whatever was pushing the galaxies away from each other dark energy. Accelerating expansion could lead to two grim outcomes. Either we end up in a big freeze, where even the light from other galaxies won’t be able to reach us. Or we experience a big rip, where the violent acceleration rips apart all matter and trace of anything having ever existed.

Q. Who came up with the name big bang?

A. The term was coined by UK astronomer and strong big bang sceptic Fred Hoyle. He favoured a fixed unchanging universe. Hoyle used the term big bang during a BBC radio broadcast in 1949, though he insisted it was not to mock the theory but to emphasise the difference between a steady and an expanding universe.