How unlocking the secrets of the nucleus impacted society, for both good and for harm. 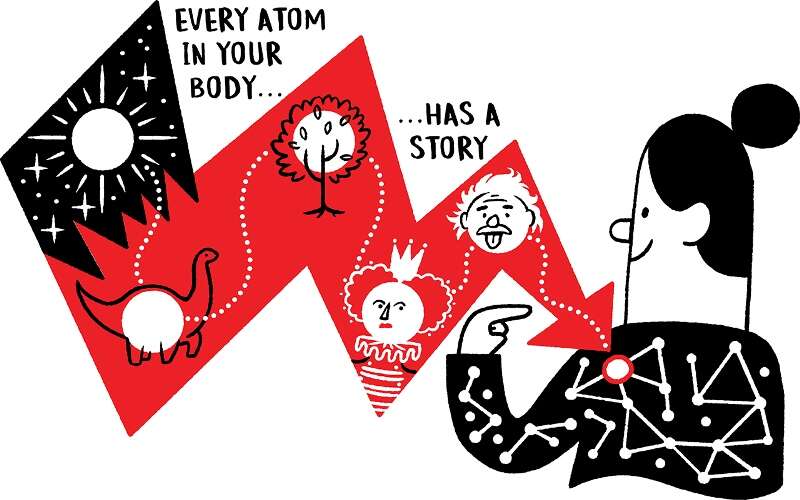 If you take a piece of paper and cut it in half, and continue to cut it smaller and smaller, what are you left with? This is a similar thought experiment to that which Greek philosopher Democritus pondered in around 400 BCE. Democritus concluded that if you kept on cutting, everything must be made of tiny eternal particles. He called them atomos, meaning indivisibles.

It took until the 19th century for Democritus to be proved right, with one important tweak in the 20th century. Atoms do exist but they are certainly not indivisible.

As Democritus rightly guessed, atoms are the basic units of matter. Like Lego bricks, they can be put together in many different ways to make everything from viruses to Venus. But while Democritus’ pictured solid atomos, real atoms are mostly empty space. In fact, the modern picture of the atom bears a striking resemblance to the Solar System.

At the centre lies the nucleus. As the biggest, most massive object by far it plays the role of the Sun. The Sun is (mostly) made of hydrogen and helium. Stretching the analogy a little, the nucleus too has just two elements: protons and neutrons. Way out in the distance, lighter electrons orbit the nucleus just as planets orbit our home star, even though the electrons themselves are not balls but rather fuzzy objects.

How do we know all this? UK physicist Joseph John Thomson was the first to make any inroads in dissecting the atom in the 1890s. Through a series of experiments, Thomson found out that atoms consist of positively and negatively charged parts. Using cathode rays – like those that powered the old big TVs – he went further. He showed that the negatively charged parts, which he named corpuscles, were much lighter compared to the mass of the atom. In fact, 1840 times lighter than a hydrogen atom. Unfortunately Thomson wrongly pictured these tiny corpuscles (later named electrons) swimming in a ball of positively charged matter, like plums in a plum pudding.

But then came New Zealand-born British physicist Ernest Rutherford. Unconvinced by the plum pudding model, Rutherford led Ernest Marsden and Hans Geiger – of Geiger counter fame – in a series of gold foil experiments between 1908 and 1913. The tests centred on so-called alpha particles.

Rutherford himself had discovered alpha particles, after building on work by radioactivity pioneers Marie and Pierre Curie, and Henri Becquerel. Today we know that alpha particles are two protons and two neutrons bound together like a helium-4 nucleus. But at the time, alpha particles were just viewed as useful high-speed positively charged projectiles emitted by radioactive elements with the mass of an atom.

Rutherford's team fired these alpha particles at a thin metal foil and recorded how they scatter. If Thomson was right, all the alpha particles would stream straight through the foil. But that was not what the scientists saw. Although most did travel through the foil, some were deflected and a handful even bounced straight back. This convinced Rutherford that the atom had a different structure. His new image of an atom was mostly empty space. Inside, the negatively charged electrons circled a positively charged nucleus.

Rutherford next wanted to find out if the nucleus itself was made out of smaller components. In the late 1910s, he discovered that he could smash apart the nuclei of nitrogen atoms by firing alpha particles at them. Doing this released what he would later call protons. Rutherford had split the nucleus in the first ever artificially induced nuclear reaction.

Then, in 1921, he predicted that the nucleus must contain another particle to keep protons from flying apart. He dubbed it the neutron. It was finally detected in 1932 by James Chadwick.

With the introduction of quantum mechanics to explain electron orbits more accurately by Neils Bohr, Erwin Schrödinger and many more quantum pioneers, the atomic model that we still use today was complete. But it was just the beginning for nuclear physics.

The 20th century saw huge advances in our understanding and use of the nucleus. For instance, in 1939 scientists Otto Hahn, Lise Meitner and Otto Frisch discovered nuclear fission – a process by which radioactive materials release energy when they are induced to split.

Realising the huge amount of energy that such a reaction produces, scientists were tasked with developing this new knowledge initially for harm in nuclear weapons. Just six years after fission’s discovery, it was harnessed in the atom bombs that destroyed the Japanese cities Hiroshima and Nagasaki, and controversially ended the Second World War. Later, much more powerful hydrogen bombs were developed that combined fission with the process powering the Sun – fusion. Luckily, none have been dropped in anger.

Elsewhere, we applied our deep understanding of the nucleus to a host of problems. Fission was tamed in nuclear power plants, and radioactivity found use in a host of areas: from detecting smoke in our homes to revealing the ages of some of Earth’s oldest inhabitants through radioactive dating.

At the same time, we probed even further into the nucleus. In 1949, Maria Goeppert-Mayer – one of only three women to have won the Nobel Prize in Physics – and Hans Jensen independently proposed that the nucleus had a structure described by energy levels, similar to the theory behind how electrons are arranged in an atom.

Accelerators also detected a vast number of other exotic particles. And by the 1970s, this particle zoo was whittled down to just 17 fundamental particles, whose forces and relationships are collected together in the Standard Model of particle physics.

The most important impact of nuclear physics today is in medicine. Positron emission tomography (PET) and magnetic resonance imaging (MRI) would never have been possible without advances in nuclear physics. In hospitals around the world, they both map the human body in fine detail to detect everything from a broken bone to life-threatening conditions like cancer and brain disease.

Meanwhile, radiotherapy has transformed cancer treatment. It uses ionising radiation – radiation that strips electrons from atoms – to target and destroy cancer cells. The simplest approach is called brachytherapy. Brachytherapy involves inserting a radioisotope – a substance containing atoms of an element with a different number of neutrons to the most stable isotope – close to the tumour. This is used to treat prostate cancer, for example.

Research will continue to explore the nucleus. These studies will provide insights into our everyday world and the universe. They will also offer new technologies that offer benefits to health and the environment. For example, thousands of scientists from 35 countries have contributed to the ITER project – the world’s largest fusion project. ITER is being built in southern France. Its goal is to harness nuclear fusion in a controlled way.

Aiming to produce energy by 2025, the vast experimental power plant will convert hydrogen into helium atoms by bringing them together at 150 million °C. This fusion releases about four times the energy that splitting nuclei does in nuclear fission plants. And with none of the radioactive waste. If they manage to unlock the nucleus’ full potential, it will signal the dawn of a new age of plentiful green energy. A fitting tribute to more than 100 years of probing the atom.

Q. Has anyone ever seen an atom?

A. The most powerful light-focusing microscopes can’t see single atoms. This is because atoms are so much smaller than the wavelength of visible light that the two don’t really interact. However, powerful electron microscopes fire an electron beam with a wavelength thousands of times shorter than a light beam. This allows these microscopes to generate images of atoms.

Q. How did neutron stars get their name?

A. A neutron star is a super-dense stellar corpse. Its gravity is so strong that it crushes atoms. The gravitational force makes the electrons combine with protons in the nucleus, making the entire star densely filled with neutrons. So dense in fact that its mass, which is about 1.4 times the mass of the Sun, is squeezed into a sphere only 15 km in radius.

Q. How much power will ITER produce?

A. ITER will be the first ever nuclear fusion facility to make a net gain of energy. It aims to produce 500 MW of fusion power from 50 MW of heating power. But ITER won’t use the energy it produces to generate electricity, as the aim is only to provide proof that the technology can work.