What is this 'dark matter' thing anyway?

Jordan Palmer, PhD student at Royal Holloway at the University of London asks: what actually is 'dark matter'? 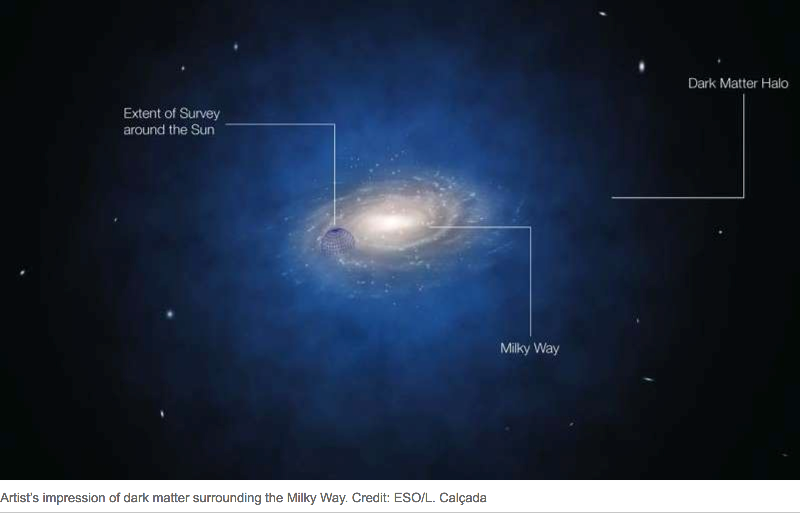 Dark matter has eluded physicists for over 50 years and seems to have no intention of revealing itself. In the 1970s, Vera Rubin observed that stars residing on the edge of galaxies moved much faster than predicted by Newtonian mechanics. If Newton’s laws were, indeed, correct, these galaxies must contain excess, invisible mass -- or, ‘dark matter’. Since then, it has been calculated that dark matter constitutes ~25% of the total mass of the universe, five times more than regular matter. Without this mysterious substance, galaxies would have never been able to form and life would never be able to exist.

One of the most important clues in the dark matter puzzle came in 1998, when physicists observed the collision of two galaxy clusters about 3.7 billion light-years away. During these types of collisions, stars would rarely collide due to their relatively low density within the galaxies. Hot gas and plasma, which makes up the majority of a galaxy, however, interact more frequently when two galaxies collide. These interactions cause the gas and plasma to slow down while the stars continue almost unaffected. This causes the two components of the galaxy to separate. To investigate the separation triggered by such a collision, scientists use a technique called gravitational lensing. In layman’s terms, this is the bending of light around an object of large mass due to the deformation of space-time. Scientists discovered that most of the mass of the galaxy clusters after the collision was located where the stars were and not where the gas was. This provided evidence that invisible mass from both galaxy clusters must have passed through one another almost completely unaffected. This is the most significant piece of evidence for dark matter to date as it proves that dark matter is particulate in nature. Furthermore, this provided crucial evidence against popular theories which attempt to modify the laws of gravity to account for the faster rotating stars on the edge of galaxies.

Theoretical physicists have come up with too many theories to explain dark matter to discuss here. However, the current leading candidates for dark matter are Axions and Weakly Interacting Massive Particles (WIMPs). The race is now on to see who can explain dark matter first - any experimental dark matter physicist that says they wouldn’t be disappointed if another experiment discovers it first is lying!

The problem of dark matter has inspired a plethora of experimental programmes, each pushing the frontiers of scientific technology. But our attempts to search for dark matter can mainly be sorted into three main techniques: make it, break it, or shake it.

The Large Hadron Collider at CERN is attempting to ‘make it’ by smashing two protons together at ultra-relativistic energies to create dark matter particles. Scientists at CERN are looking for particle tracks in their detector that do not appear to conserve momentum in order to infer the existence of these invisible dark matter particles.

Some experiments, such as the Fermi Gamma-ray Space Telescope (Fermi-LAT), look into space for dark matter and anti-dark matter collisions to find out what happens when we ‘break it’. In such collisions, two gamma rays are emitted -- each with half the energy of the total collision energy. The Fermi- LAT looks for an excess of gamma ray signals to indirectly infer the existence of dark matter.

Last, but by no means least, is the ‘shake it’ category. Many experiments all around the world are searching for dark matter collisions with nuclei with liquid noble gases. One of the main detection methods from this category is called scintillation. When a dark matter particle 'shakes' the nucleus of an atom, the nucleus becomes energetically excited and emits photons in a process called scintillation. The number of photons emitted in this process is proportional to the energy of the struck particle. In order to distinguish between dark matter collision events and other, less interesting collision events, physicists have to undertake a thorough mitigation of unwanted collisions. This is what causes physicists the majority of their problems since trillions of neutrinos and other particles (some emitted from the detector itself!) cause similar signals to that of dark matter collisions. Other methods include the detection of dark matter by the ionisation caused, and phonons created by, particle interactions with Germanium and Silicon crystals.

I myself am just starting a PhD searching for these (very real) particles. I will be working on the Lux-Zeplin dark matter experiment, located in South Dakota which falls within the ‘shake it’ category. There, I will be attempting to detect CNO neutrinos emitted from the center of the Sun. CNO neutrinos are yet to be detected and should give us clues as to what the solar core is made of and what its temperature is. It is hypothesised that WIMPs, one of the candidates for dark matter, could accumulate within the solar core and cools it down producing a decreased number of these CNO neutrinos. A measurement of CNO neutrinos, therefore, could give us valuable information on the properties of dark matter. In our department at Royal Holloway, we work on a number of experiments, which include: DarkSide-20k, Lux- Zeplin, and DEAP-3600, all of which are ‘shake it’ experiments.

Dark matter is an invisible needle in a universe-sized haystack and has kept physicists busy for long enough. But with new experimental technologies, I guarantee that it will be detected within the next 10 years. If not, I will eat my hat. Dark matter, it’s time to show yourself … whatever you are!