In recent years theoretical physics has become associated with exotic concepts such as black holes, general relativity, quantum theory and the Higgs boson, which all represent extraordinary successes for physics but which we rarely encounter directly in our everyday lives.

Environmental physics has achieved equally remarkable successes in analysing our environment, which can have an immediate and directly visible impact on the quality of our lives.

Here “environment” includes all aspects of the world in which we live our daily lives: the weather and climate; pollution; buildings and vehicles; the atmosphere we breathe.

Physics is helping us to understand, measure, control and improve our environment in ways which may be surprising. In this article I give an example of how environmental physics works to provide a critical service – weather forecasting.

Early civilisations recognised that there was a connection between factors in the environment, such as cloud type, wind speed and temperature and the weather. However, there were few reliable mechanisms for predicting future weather events.

It was not until the 19th century that Robert FitzRoy, captain of HMS Beagle, the survey ship which also took Charles Darwin around South America, started to systematically record atmospheric parameters such as pressure, wind speed and direction and to chart their relationship to the weather.

FitzRoy began the first attempt to provide a scientifically based weather prediction service by distributing accurate instruments to observation posts around the country and by devising methods to model how the weather might evolve. He went on to establish what has since become the Met Office.

Along with other scientists such as Francis Beaufort, inventor of a wind speed scale, FitzRoy represented a move to understand the basic mechanisms in the atmosphere which drive the weather.

He appreciated that accurate measurements and a comprehensive model were essential for success, although his early efforts were only partially useful because of the limited numbers of measurements he could obtain.

Gradually it became clear that it is essential to know the state of the atmosphere across the whole world in as much detail as possible to be able to create an accurate mathematical model to predict the weather. It is now understood that the atmospheric environment is in fact a gigantic but intimately interrelated and extremely complex system but one which has still proved amenable to rigorous scientific investigation.

Nowadays the Met Office, along with other met agencies across the world, use very sophisticated computer models consisting of millions of lines of software to predict the weather many days ahead.

These models simulate fundamental laws of physics such as heat diffusion, atmospheric physics and chaos theory and apply them to measured data from buoys in the ocean, weather balloons, ships and aircraft, as well as land-based weather stations.

Creating fully scientific models with no “free parameters”, which are essentially guesses, has been a major recent achievement. However, the models cannot function successfully without huge amounts of raw atmospheric data.

Increasingly, since 1977, data has also come from weather satellites, which can provide the necessary global measurement coverage at greater levels of granularity as the instruments carried on board become more powerful. The data they provide also contributes to the production of accurate climate analyses.

Geostationary (GEO) satellites orbit the Earth around the equator and the height of their orbits is set to about 22,000 miles, which means that they orbit in exactly the same time that the Earth takes to spin on its axis (24 hours).

These satellites therefore appear to hover over the same place on the Earth and always give a complete view of the same hemisphere. As a result, GEO satellites can deploy instruments such as high-resolution cameras, spectrometers and radiometers which always provide up-to-date data on what the atmosphere is doing.

Sophisticated processing on the ground allows the raw sensor data to be turned into meaningful “products” which can be fed into the weather prediction models. 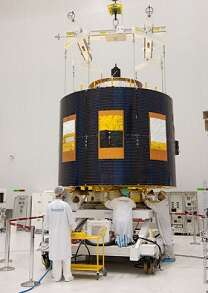 The picture above shows the preparation of one of the current series of Meteosat Second Generation GEO weather satellites used over Europe by EUMETSAT, the European agency responsible for operating these satellites. It is cylindrical because its positional stability is maintained by spinning the satellite once it is in orbit.

The dark areas are solar panels used to provide electrical power and the gold areas are where ports will provide viewing for the various sensors.

The next generation of GEO satellites will be even more sophisticated and they will be stabilised by on-board gyros rather than by spinning.

The picture below shows a virtually cloud-free Europe captured by one of these GEO satellites. 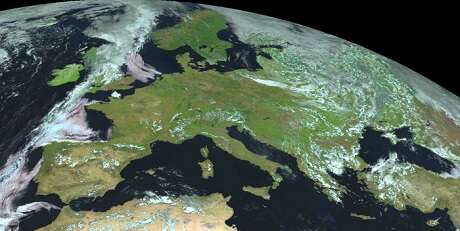 Low-Earth orbiting (LEO) satellites used for meteorology typically have orbits which pass over the North and South poles at much lower altitudes of around 500 miles. Their orbital time is around 100 minutes but because the Earth is spinning underneath them they do not pass over the same part of the Earth with each orbit.

Their much lower orbit than geostationary satellites gives LEO satellites a much closer view of the atmosphere with consequently much higher resolution, but they only overpass exactly the same part of the Earth every 29 days, although overlapping parts of their orbits (swaths) give repeat coverage every five days in practice.

To allow weather models to work properly they need global data: for example, knowing what is happening in South East Asia is vital to understanding weather patterns across the Atlantic and in Europe.

Different countries which operate meteorology satellites at different longitudes now share data from their satellites through the World Meteorological Organisation which all contribute to this global data exchange to ensure that the weather forecast is as accurate as possible.

And in another recent development, probes sent to other planets and their moons such as Titan, a moon of Saturn, have shown similarities in their weather systems to some aspects of the Earth’s, although on Titan the water cycle is replaced by a methane cycle, which was quite surprising.

By understanding the physics and chemistry of these remote weather systems we increase our understanding of what the weather is doing, and why, here on Earth.

Meteorology is an excellent example of an interdisciplinary science in which physics plays a critical role, from the detailed mathematical and computer modelling of atmospheric dynamics to the design of spacecraft and their observation instruments, through to orbital mechanics to keep the spacecraft in their correct orbits, taking into account relativistic effects.

It shows how a knowledge of physics and other scientific disciplines, such as atmospheric chemistry, together with a willingness to work in collaboration with other experts such as engineers and system designers has become essential to delivering success in today’s complex world of high technology.