“If the Sun had no magnetic field, it would be as uninteresting as most astronomers think it is” — Robert B. Leighton

Our Sun is just one of an estimated 100 thousand million stars in the Milky Way. It is often described as an ordinary star, which perhaps it is. But it is our nearest star - light from the Sun takes only about eight minutes to reach us, but light from the next nearest star takes four years to arrive - and we humans have been fascinated by it for millennia.

First observations of the Sun

The close proximity of our Sun provides us with a unique opportunity to study its evolution in spectacular detail, which is not currently possible for other stars. Some of the first observations recorded of the Sun were made during a total solar eclipse. During totality, the light from the Sun’s visible surface is blocked out by the Moon revealing the tenuous outer atmosphere of the Sun, known as the solar corona. The oldest eclipse record was discovered in Syria on a clay tablet that dates back to around 1223 BC.

However, there is a legend that predates from the reign of the Chinese Emperor Chung K’ang in 2136 BC. In ancient times, a common and reoccurring misconception was that during an eclipse, the Sun was being devoured by a mythical creature such as a dragon and therefore, religious or spiritual rituals were performed to frighten away this mythological beast. The legend goes that Hi and Ho, the court astronomers,  got drunk and failed to predict a solar eclipse and so the Chinese Emperor decided to have them executed. 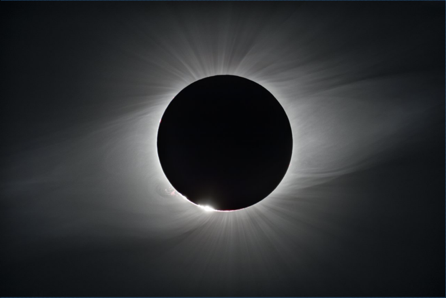 Credit: ESO/P. Horalek, An image of the solar corona taken at ESO’s La Silla Observatory in Chile during the most recent total solar eclipse on 2nd July 2019.

As you will already know, you should never look directly at the Sun with the naked eye. However, the first known record of sunspots dates back to 800 BC when Chinese astronomers recorded the darkening or obscuration of the Sun. Before the invention of the telescope, naked-eye observations of large sunspots were often made during sunrise or sunset in certain atmospheric conditions, such as clouds or mist. It wasn’t until after the invention of the telescope in 1610 that routine observations of sunspots were made.

There is a considerable amount of controversy surrounding who was the first to record telescopic observations of sunspots, as well as the true nature of these spots. Galileo Galilei, who is famous for numerous scientific discoveries including the four most massive moons of Jupiter, claimed he discovered sunspots in 1610. Although, Thomas Harriot was said to have made sunspot observations more than a year before Galileo, David and Johannes Fabricius also independently discovered sunspots in 1611 along with Christopher Scheiner.

Regardless of who first discovered them, astronomers were divided: were these sunspots satellites that revolved around the Sun or clouds in the Sun’s atmosphere? From the constant monitoring of sunspots, it was also first noted that equatorial sunspots had a faster rotation rate (~25 days) than those at higher latitudes (~35 days): a hint that the Sun is not a solid body and rotates differentially. 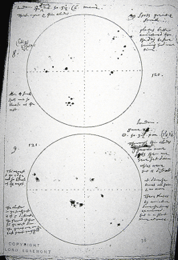 Credit: The Galileo Project. Sunspot drawings made by Thomas Harriot.

Sunspots appear dark on the Sun’s visible surface and are in fact the manifestations of strong, highly concentrated magnetic field, thousands of times that of the Earth’s magnetic field. Their magnetic nature was first discovered in 1908 when George Ellery Hale measured the Zeeman splitting of several magnetically sensitive spectral lines of a sunspot.

Sunspots appear dark as they have cooler temperatures in comparison to their surroundings due to their intense magnetic fields. They are usually observed in pairs or groups, can exist for days, weeks or even months and cover an area on the Sun approximately the size of the Earth. The reconfiguration of the magnetic fields associated with sunspots are often responsible for large-scale space weather events such as solar flares and coronal mass ejections. 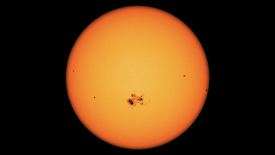 Credit: NASA/SDO. An enormous sunspot group that is almost the size of Jupiter appeared on the Sun back in 2014.

Through the constant monitoring of the numbers and positions of sunspots Heinrich Schwabe in 1843 noticed that there is a cyclic increase and decrease of the numbers of sunspots visible on the Sun. This was the discovery of the Sun’s 11-year activity cycle. Along with the number of sunspots, their locations also vary throughout the cycle. At the beginning of the cycle sunspots emerge around mid-latitudes and as the cycle progresses sunspots gradually appear closer to the equator. The reversal of the polarities of sunspot pairs and the polar magnetic field indicate that the 11-year cycle is actually half of a longer 22-year cycle.

Credit: NASA/MSFC. Sunspot records dating back to the 1600’s. Records indicate that during the time period from 1645 to 1715 the Sun went through a period of inactivity known as the Maunder Minimum.

These cyclic variations in the numbers and distribution of sunspots are generated by the solar dynamo, which is driven by a combination of differential rotation and convection occurring underneath the solar surface. As we do not fully understand the inner workings of our Sun, it is rather challenging for scientists to predict the strength of the next solar cycle. The solar minimum of solar cycle 24 is expected to end towards the end of 2019 or early 2020 when cycle 25 is expected to start. 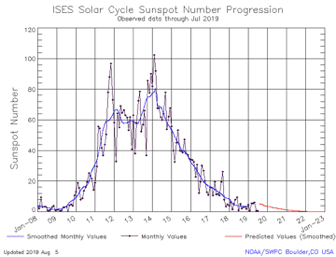 Credit: NASA/SWPC. The solar cycle progression of our current cycle with observed and predicted sunspot numbers.

The daily monitoring of sunspots on the solar disk led to the discovery of solar flares. A solar flare is observed as a rapid and intense variation in brightness that occurs over the course of minutes to hours. This phenomenon occurs when the energy stored in the Sun’s magnetic field in released, which causes particle acceleration  and radiation to be emitted over the entire electromagnetic spectrum: from radio emission to gamma rays. The energy  associated in one of these events is equivalent to millions of 100-megaton hydrogen bombs. 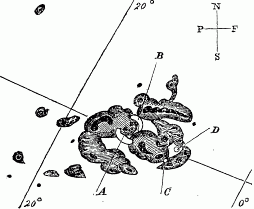 Credit: Royal Astronomical Society. The drawing of the sunspot group made by Richard Carrington in 1859. 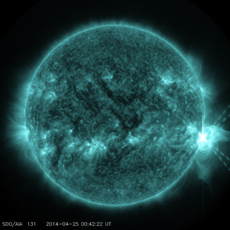 Credit: NASA/SDO. A solar flare observed on the right side of the Sun by the Solar Dynamics Observatory (SDO).

In early September 1859, Carrington observed two brilliant beads of blinding white light appearing over the sunspots. They intensified rapidly, but within 5 minutes had disappeared. However the next day skies all over the planet erupted in red, green, and purple auroras. Telegraph systems went haywire. What he witnessed – and it later became known as the Carrington Event – was an enormous solar flare which caused a huge geomagnetic storm on Earth. This created ground induced currents which caused the telegraph operators to receive shocks, telegraph paper to catch fire and the telegraphs to continue to send and receive messages even when they were disconnected. Today, scientists speculate that the occurrence of a Carrington Event could cause billions of pounds worth of damage to our technological systems.

Despite observing the solar corona for thousands of years during total solar eclipses, the existence of solar eruptions remained undiscovered. The first observation of a solar eruption wasn’t until the total solar eclipse of 1860 and the term coronal mass ejection wasn’t used until the space age. Eclipses are rare and offer a very short time window (on the order of several minutes) to study the Sun’s outer atmosphere. This led to the invention of the coronograph: a telescope with an occultation disk, which blocks out the light from the Sun’s visible surface. We now have coronagraphs on board satellite missions such as SOHO (SOlar and Heliospheric Observatory) and STEREO (Solar TErrestrial RElations Observatory) that constantly monitor the Sun for these eruptions. 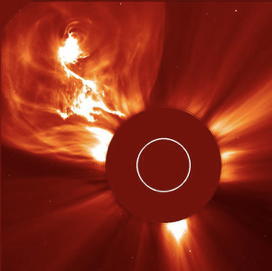 Credit: NASA. A CME observed on 4th January 2002 by the Large Angle and Spectrometric Coronograph (LASCO) onboard SOHO.

Coronal mass ejections are the largest-scale eruptive phenomenon in the solar system and consist of bubbles of plasma threaded with magnetic field. These eruptions are caused by large amounts of energy and stress, which is built-up and stored in the magnetic field until a critical point is reached and stability is lost, causing this energy to be released into space. Coronal mass ejections occur almost every day although, these eruptions are much more frequent during solar maxima. Once an eruption has occurred it propagates into interplanetary space impacting any planet or satellite in its path.

These space weather events can induce currents in the power grids that not only result in power outages but also cause permanent damage to power grid transformers, which require months to repair. These events can also disrupt GPS navigation, cause radio communication blackouts, damage spacecraft and satellite electronics and severely impact astronaut health. 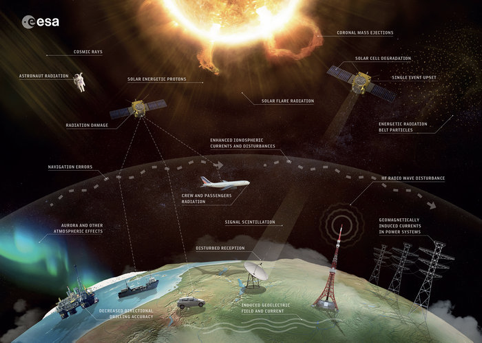 To mitigate the effects of space weather we turn to space weather forecasting. The current approach is to constantly monitor the Sun for the occurrence of coronal mass ejections using space-based instruments such as SOHO and STEREO. Once detected, their propagation can be modelled using properties such as their speed, speed and direction. By modelling these eruptions a warning of 1-3 days before these ejections reach Earth can be provided.

However, the National Grid requires a 3-5 day warning of the arrival of a coronal mass ejection to protect its transmission systems, which means that the warning time currently provided is insufficient. This is why scientists, such as myself, produce and develop models of the evolution and eruption of the Sun’s magnetic field to try to predict coronal mass ejections prior to eruption to extend current forecasting capabilities and timescales.

Solar Orbiter: A mission to touch the Sun

Our next upcoming mission to study the Sun is ESA’s Solar Orbiter, which will launch from Cape Canaveral on board an Atlas V rocket in February 2020. Solar Orbiter will work in conjunction with NASA’s Parker Solar Probe launched in August 2018 to understand what drives solar activity.

The satellite, which was assembled in the UK at Airbus in Stevenage, will travel closer to the Sun than the planet Mercury, it was a challenging mission to build as it has to be well equipped to withstand extremely high temperatures and levels of radiation. The Solar Orbiter mission will take 3 years to reach its destination requiring a series of gravity assist manoeuvres at Earth and Venus. 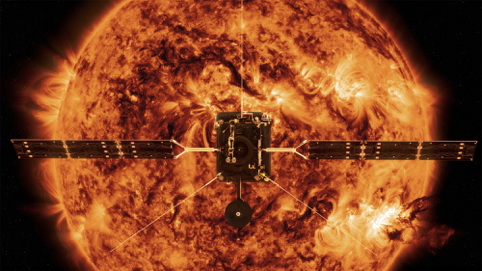 The spacecraft will have a highly elliptical orbit and will therefore provide high-resolution images of the Sun’s polar regions, which haven’t been seen before. These polar observations should help us understand how the Sun’s magnetic field is generated and how these fields drive the solar cycle. The Solar Orbiter will also be travelling at very high speeds, almost in co-rotation with the Sun, for time periods of several days. During these time periods, the instruments on board will be able to observe the build-up of magnetic fields leading to the formation of solar eruptions in order to improve space weather forecasting.