Many hands make light (and gravity) work: the dawn of multi-messenger astronomy

From football managers to field marshals, from primary school teachers to prime ministers, we’ve heard them all use that classic motivational mantra: “If we all just work together, we can achieve so much more”. And yet for the world of astronomy, this well-worn cliché has now proven to be true in quite (literally) spectacular fashion.

On 17 August 2017 the global network of advanced gravitational-wave interferometers – comprising the twin LIGO detectors in the US and their European cousin, Virgo, in Italy – observed tiny ripples in space and time produced by the violent collision of two massive, dense stars about 130 million light years from the Earth. 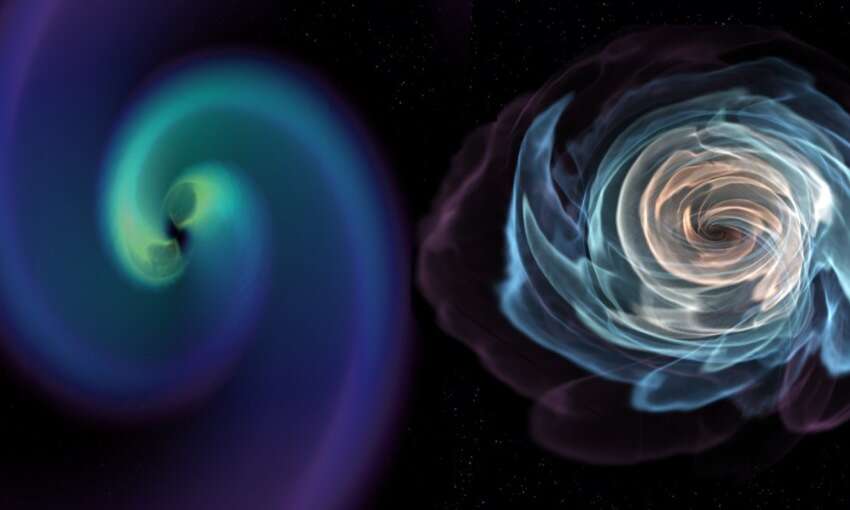 Cataclysmic Collision. Artist’s illustration of two merging neutron stars. The rippling space-time grid represents gravitational waves that travel out from the collision, while the narrow beams show the bursts of gamma rays that are shot out just seconds after the gravitational waves. Swirling clouds of material ejected from the merging stars are also depicted. The clouds glow with visible and other wavelengths of light. [Credit: NSF/LIGO/Sonoma State University/A. Simonnet]

So how exactly do you catch a gravitational wave? The key is to use the properties of laser light. Interferometers like LIGO and Virgo consist of two 'arms' (in the case of LIGO, each one 4km long) at right angles to each other, along which a laser beam is shone and reflected back and forth by mirrors at each end.

When a gravitational wave passes by, the stretching and squashing of spacetime causes the arms of the interferometer alternately to lengthen and shrink. As the interferometers' arms change lengths, the laser beams take a different time to travel through them – which means that the two beams are no longer 'in step' and an interference pattern is produced when they are re-combined. This is why we refer to the LIGO detectors as 'interferometers'.

The signature of a gravitational wave from far out in the cosmos is mind-boggingly small by the time it reaches us, however – typically lengthening LIGO’s arms by roughly about one million millionth the width of a human hair!  How on Earth can we detect such incredibly tiny effects?  Well 'on Earth' is crucial here, since there are all manner of local disturbances, from the ground shaking to power grid fluctuations, and instrumental 'noises' that could mimic or indeed completely swamp a real signal from the cosmos.

Now by August 2017 discovering gravitational waves from colliding black holes was starting to feel like familiar territory, with several confirmed detections made by LIGO and Virgo in less than two years. The first of these black hole collisions, discovered in September 2015, was announced to huge global acclaim in February 2016 and led to the award of the 2017 Nobel Prize for Physics to three scientists who had made crucial contributions to the LIGO project: Rai Weiss, Kip Thorne and Barry Barish.

In the years leading up to that first gravitational detection almost every aspect of the LIGO detectors’ design had been upgraded, to achieve the astounding sensitivity required to overcome these sources of noise.  The University of Glasgow, leading a consortium of UK institutions, played a key role in this work – developing, constructing and installing the sensitive mirror suspensions at the heart of the LIGO detectors.

As far as we know, however, colliding black holes offer purely a window on the dark side of the universe: no less important for that, but with no accompanying signature in the form of light – or at least none that we have detected so far.

But GW170817, the gravitational-wave event of 17 August, would change all that. The source of the waves this time was two neutron stars – incredibly dense stellar remnants weighing more than the Sun but each the size of city – whizzing around each other at a sizeable fraction of the speed of light before merging in a cataclysmic collision that would shake the very fabric of space and time. The cosmic concerto was just beginning, however. 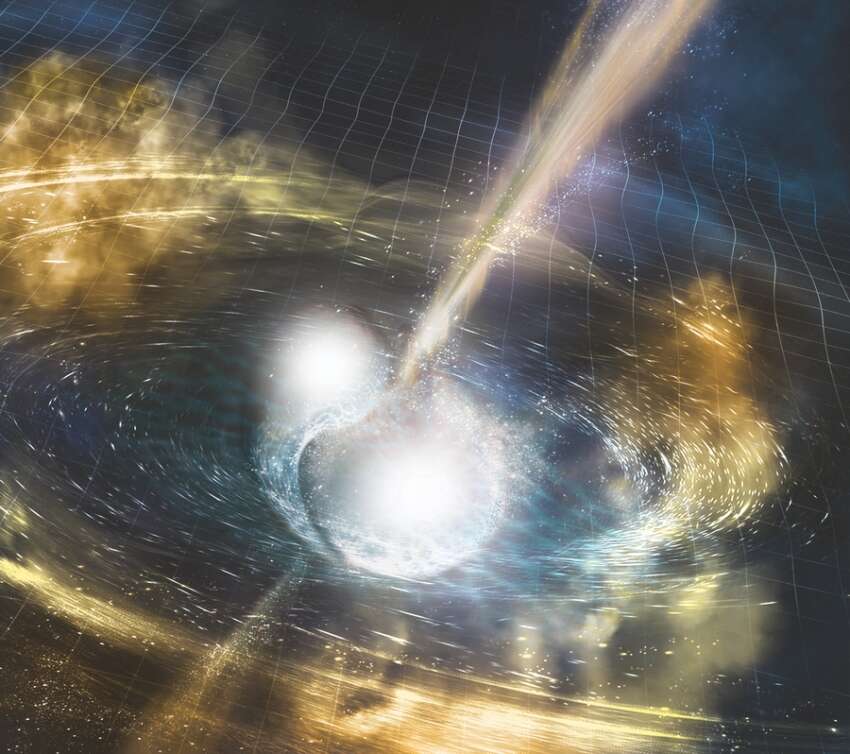 Neutron Star Merger Seen in Gravity and Matter. This still image from an animated visualization shows the coalescence of two orbiting neutron stars. The right panel contains a visualization of the matter of the neutron stars. The left panel shows how space-time is distorted near the collisions. An additional composite image from this simulation can be found here. [Credit: Karan Jani/Georgia Tech]

Astronomers have long suspected the merger of two neutron stars to be the overture to a short gamma ray burst – an intense flash of gamma-ray light that releases more energy in a fraction of a second than the Sun will pump out in 10 billion years.

For several decades we have observed these gamma ray bursts, but without knowing for sure what causes them. However, just 1.7 seconds after the gravitational waves from GW170817 arrived at the Earth, NASA’s Fermi satellite observed a short burst of gamma rays in the same general region of the sky:  LIGO and Virgo had found the smoking gun, and the link between neutron star collisions and short gamma ray bursts was established.

The combination of gravitational-wave and gamma-ray observations allowed the position of the cosmic explosion to be pinpointed to less than 30 square degrees on the sky – or about 100 times the size of the full Moon. This, in turn, allowed a whole barrage of astronomical telescopes sensitive to light across the entire electromagnetic spectrum to search this small patch of sky for the aftermath of the explosion, and sure enough this was found – in an unfashionable backwater towards the edge of a fairly unassuming galaxy called NGC4993, in the constellation of Hydra.

Over the next few days and weeks astronomers watched agog as the embers from the explosion glowed brightly and faded, matching beautifully the pattern expected for a so-called 'kilonova' – produced when some extremely neutron-rich material from the initial merger event is ejected at great speed by the gamma ray burst and ploughs into the surrounding region of space, triggering the production of heavy radioactive elements.

It is the subsequent decay of these elements that causes a kilonova to glow, as we have now confirmed by mapping out in exquisite detail the kilonova in NGC4993, and the end-products of these chains of reactions are believed to include copious amounts of precious metals like gold and platinum.

Indeed, the kilonova that formed from the embers of GW170817 could have produced the mass of the Earth, or 1000 trillion tonnes, in gold!

By observing a kilonova 'up close and personal' for the very first time, and seeing how well it fits into the unfolding astronomical storyboard that began with the neutron star merger detected by LIGO and Virgo, astronomers have taken a huge leap forward in our understanding of these violent cosmic events – and how they might have shaped the origins of cosmic bling.

The idea that we are all made of stardust is increasingly appreciated in popular culture, but the mind-blowing concept that the gold in our wedding rings and Rolex watches is made of neutron stardust has now added a whole new level to the story of cosmic creation.

Perhaps even more exciting than the wonderful science already gleaned from this 'Golden Binary' is the enormous potential now unlocked by this radical, new approach to studying the cosmos.

By working together collaboratively, using state-of-the-art instruments that operate not just across the entire spectrum of light but are sensitive to gravitational waves and even neutrinos too, astronomers are poised to fully open a completely new 'multi-messenger' window on the universe.

With the cataclysmic events observed on 17 August 2017, the exciting new era of multi-messenger astronomy has truly started with a bang!