Getting to know the Higgs particle: new discoveries!

Professor Aidan Robson, Professor of Particle Physics at the University of Glasgow and a CERN Scientific Associate, on why the Higgs boson, detected in 2012, is one of the biggest recent breakthroughs in fundamental physics.

In 2018, we are still discovering some of the Higgs boson’s most important properties for the first time. This summer alone, the ATLAS and CMS experiments at the Large Hadron Collider (LHC) at CERN made first observations of three key processes that help us understand the nature of the particle: its decay to bottom quarks, its production along with top quarks, and its production along with a W or Z boson.

Why do these matter, and what experiments are being planned to study the Higgs boson in future?

The search for the Higgs boson arose from a theory developed in the 1960s. At that time, the mathematical description of nature’s fundamental building blocks and forces, now known as the Standard Model of particle physics, successfully described the observed particles and their interactions. But there was a big problem:  it treated the fundamental particles as massless, and early attempts to include their masses spoiled the predictions of the theory.

To solve this, Robert Brout, Francois Englert, Peter Higgs and others developed the idea that the universe is filled by what we now call the Higgs field, and that what we mean by a particle’s mass is the strength of its interaction with this field. Introducing the extra field allowed particle masses to be included in the theory, while saving all its other properties.

They proposed that this field should be present throughout the universe, and furthermore should have a non-zero value everywhere – this is quite different from other fields (for example, a magnetic field), which need a source (for example, a magnet) to produce them. What Peter Higgs also realized was that if the field exists, then there should be ‘ripples’ in it, which we would observe as a particle: the Higgs boson. Observing the Higgs boson would provide evidence for the field.

Successive generations of accelerator capable of creating higher and higher collision energies were used to search for the Higgs boson until 2012, when to worldwide excitement the ATLAS and CMS experiments at the LHC announced the observation of a new particle with mass around 125GeV/c2. A Nobel Prize for Francois Englert and Peter Higgs followed in 2013 (Robert Brout died in 2011).

At the time of the discovery only a few properties of the new particle had been measured, and work to understand its nature has been continuing at a great pace ever since.

In particular, to test the theoretical ideas, we need to measure the interactions of the new particle with all of the other known particles in the Standard Model, and see whether these interactions match the predictions of Peter Higgs and his colleagues, or whether we have in fact discovered something more exotic.

But even though this is the most likely Higgs boson decay, it’s difficult to observe because there are so many other processes that look very similar in our detectors but that don’t involve Higgs bosons.

Picking out the Higgs processes involves careful modeling of all the backgrounds using simulations of the detector, development of techniques to separate the signal from the backgrounds, and study of ‘control regions’ that have characteristics similar to the signal. We also need a large dataset from the collider, which takes time to accumulate. We build up distributions of observable quantities like mass or energy from many collision ‘events’ and look for an excess of signal-like events over the background prediction.

In particle physics an ‘observation’ is a signal that has a probability of less than one in about 3.5 million of being a background fluctuation; this is known as ‘5-sigma significance’.

Having analysed all the data collected so far, one of this summer’s exciting results was the first observation of the Higgs boson decaying to bottom quarks [1]. One of the sensitive observable quantities, the mass reconstructed from the decay products, is shown in the plot, as well as a display of one of the most signal-like collider events. 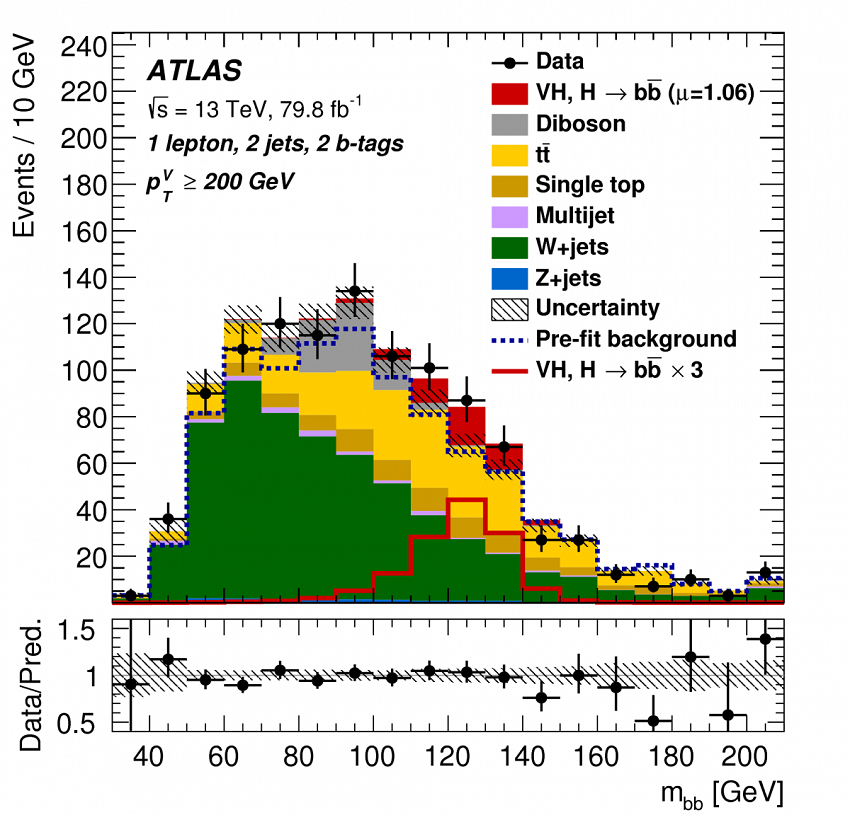 Mass reconstructed from decay products, with Higgs signal shown in red, the backgrounds in various colours, and the data points as the black markers with error bars. ATLAS Experiment © 2018 CERN.

Display of one of the most signal-like collider events where the candidate Higgs boson decays to bottom quarks, and a W boson decays to a muon and neutrino. ATLAS Experiment © 2018 CERN.

With the same analysis that detected the decay to bottom quarks, we made the first observation of a new way of producing the Higgs boson: when it’s produced along with a W or Z boson.

And in the third exciting new observation of the summer, we measured a further new production mode: when the Higgs boson is produced along with a pair of top quarks [2].

That’s two out of the four Higgs production modes at the LHC that have both only just been observed. These measurements help us verify the behaviour of the Higgs boson and – crucially – give us sensitivity to other new physical effects that could be just around the corner.

One example of these potential new effects relates to dark matter. We know that about 25% of the universe consists of dark matter; that is, matter that interacts gravitationally but does not emit photons and so can’t be observed using telescopes.

The first challenge is to measure all of these interactions at all, which we are doing now with the LHC. But for sensitivity to new effects we need to be able to measure them even more precisely, and for that, future generations of colliders are already being planned.

One such option is the Compact Linear Collider (CLIC). While the LHC collides protons, CLIC would collide electrons and positrons.

Unlike protons, which contain quarks and gluons, electrons and positrons are (as far as we can tell) fundamental, which allows some measurements to be performed much more precisely.

The project to realize a future collider like CLIC takes decades; the current proposal would see it starting collisions in 2035 with an experimental programme spanning 25–30 years. Planning, prototyping, constructing, installing, and running the accelerators and detectors underground will take thousands of physicists, engineers of all kinds, computer scientists, and geologists; not to mention lawyers, accountants, and project managers.

So whatever your interest, you could be involved in the next steps of understanding the nature of the Higgs boson and what comes beyond it; the discovery was just the beginning of the story!

Visualisation of the proposed CLIC collider at CERN. © 2018 CERN.