Dr Tzany Kokalova Wheldon, senior lecturer at the School of Physics and Astronomy at the University of Birmingham and chair of the IOP Nuclear Physics Group Committee explains the amazing world of the nucleus.

If we go back in time to fractions of a second after the big bang (10–5 s) the universe was a primordial soup of quarks, anti-quarks and gluons known as a quark-gluon plasma. These particles interact via the strong force and, according to our understanding, the nuclear force is the result of their residual interactions.

Investigating the quark-gluon plasma is one of the big research areas in modern nuclear physics and this is what the ALICE experiment at CERN LHC is investigating. Another big community of researchers, including myself, is intrigued by investigating the structure of the nucleus. Indeed, nuclei come in lots of different shapes which arise from the delicate interplay of the nuclear strong force and Coulomb interactions.

We often imagine the nucleus as a sphere, a homogeneous mix of protons and neutrons. In fact the majority of nuclei are not spherical, but prolate deformed like a rugby ball in their lowest energy states, i.e. when they are coldest, in what is called the ground state (see figure 1: Nuclear shapes). However, the specific structure of the nucleus can change depending on the amount of internal energy. For the same number of protons and neutrons the degree of excitation (or heating) of the nucleus affects the precise arrangement of proton and neutron orbits, which can lead to a variety of eccentric and intriguing shapes within the same nucleus. These are called ‘excited states’. An example for lead-186 is shown in figure 1: Nuclear shapes. 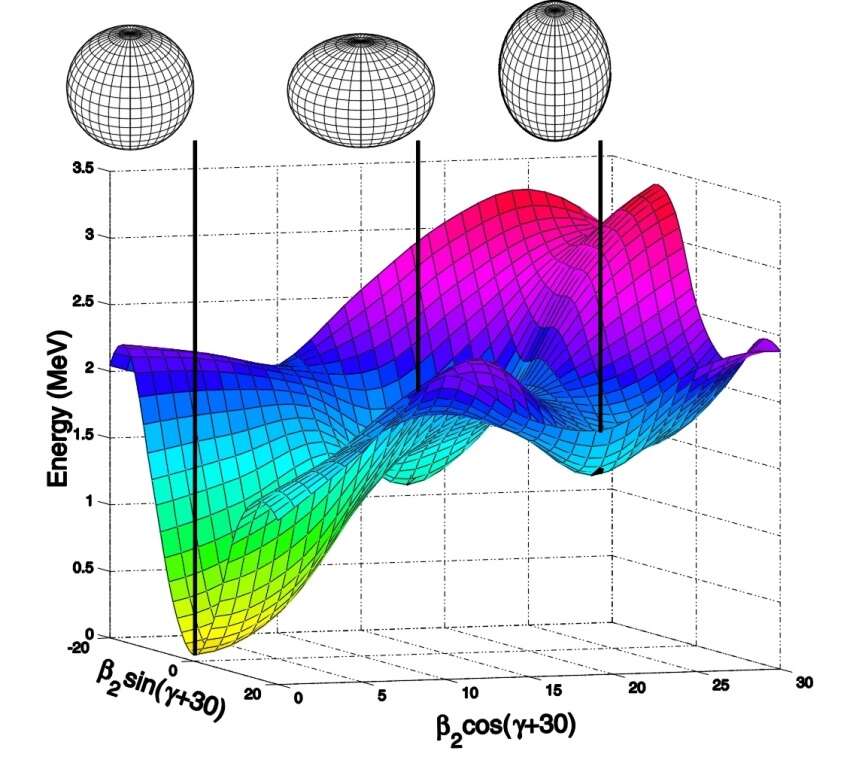 Figure 1: Nuclear shapes. Different nuclear shapes are possible. Three of the most common are shown here for the lead-186 nucleus as the excitation energy increases -- spherical, oblate and prolate shapes (from left to right). Figure from A.N. Andreyev et al., Nature 405 (2000) 430.

Much like the well-known periodic table of the elements, there exists a chart of the nuclides known as the ‘Segrè Chart’ (see figure 2: Nuclear chart) – a two-dimensional graph where the number of neutrons in an atomic nucleus is plotted on the x-axis and the number of protons on the y-axis. As can be seen from figure 2: Nuclear chart there are many different isotopes; nuclei of the same element (i.e. with the same number of protons), but different numbers of neutrons.

Figure 2: Nuclear chart. Segrè chart of the nuclides coloured according to discovery reaction. The large yellow area shows the as yet unexplored region of isotopes. Figure from  M. Thoennessen& Rep. Pro. Phys. (2013) 056301.

There are over 7,000 isotopes predicted (theoretically) to exist but only about half of them have been successfully created in the laboratory to date. It is difficult to produce a lot of the nuclei since the majority of them are unstable. There are only about 300 stable nuclei which are depicted in black in figure 2: Nuclear chart. The remaining, unstable nuclei decay via a range of different processes (for example by beta decay, alpha decay or spontaneous fission, though other, more exotic decays are also possible).

You might wonder how all of these elements/nuclei were made? To answer this question we have to move further along the time-line of the universe. A few seconds after the big bang, primordial nucleosynthesis began and was responsible for the formation of most of the lightest elements we find, such as hydrogen and helium. Similar processes occur in stars like our Sun in which the fusion of protons and neutrons is taking place via a three-step process to synthesise alpha-particles (helium-4 nuclei comprising 2 protons and 2 neutrons).

To produce heavier elements like carbon and oxygen, which are necessary for all life on Earth, alpha-particles need to fuse together. But there is a problem: when two alpha particles fuse together they form beryllium-8, which falls apart within 10–16 seconds! This, together with the absence of a stable mass-five nucleus creates a bottleneck for production of heavier elements (see figure 3: Bottleneck). In fact, the abundance of carbon and oxygen and how they have been made in stars was an enigma in the 1950s until Sir Fred Hoyle suggested that there should be an excited state in carbon-12 with exactly the right energy to make this possible. The state was discovered experimentally several years later and named after him: The Hoyle state. There are now more than a hundred thousand excited states known across all nuclei, but only this one that bears a name! 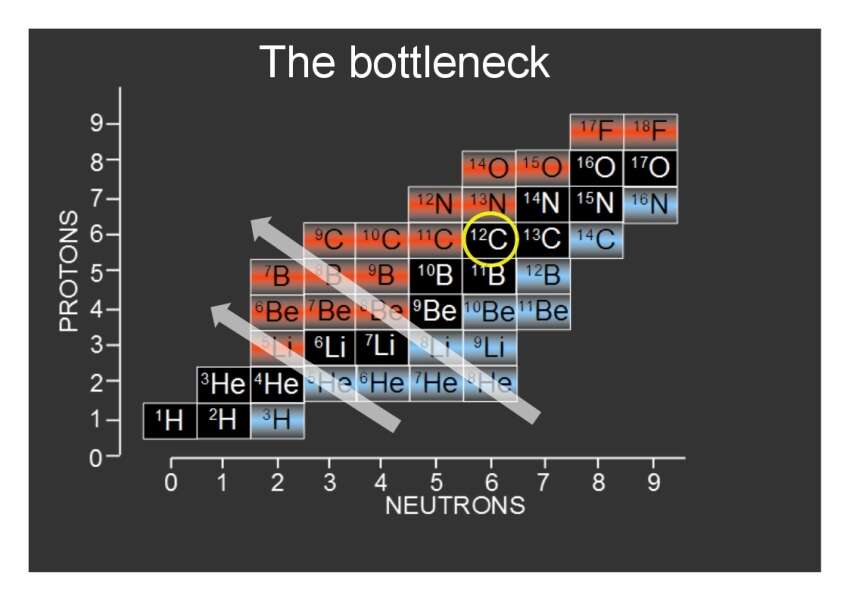 Figure 3: The Bottleneck. The lightest nuclei. Some elements were produced in primordial nucleosynthesis that began a few seconds after the big bang. However, to produce heavier nuclei like carbon-12 and beyond requires very hot stars and special nuclear properties to overcome the bottleneck that arises due to the absence of stable mass-five and mass-eight nuclei.

During the next stage of the life cycle of a Sun-like star, three alpha particles are required to fuse together to form carbon-12 – this is called the triple alpha process (see figure 4: Triple Alpha Process). The presence of the Hoyle state increases the production of carbon in stars by around eight orders of magnitude (see figure 5: Carbon-12 Levels). 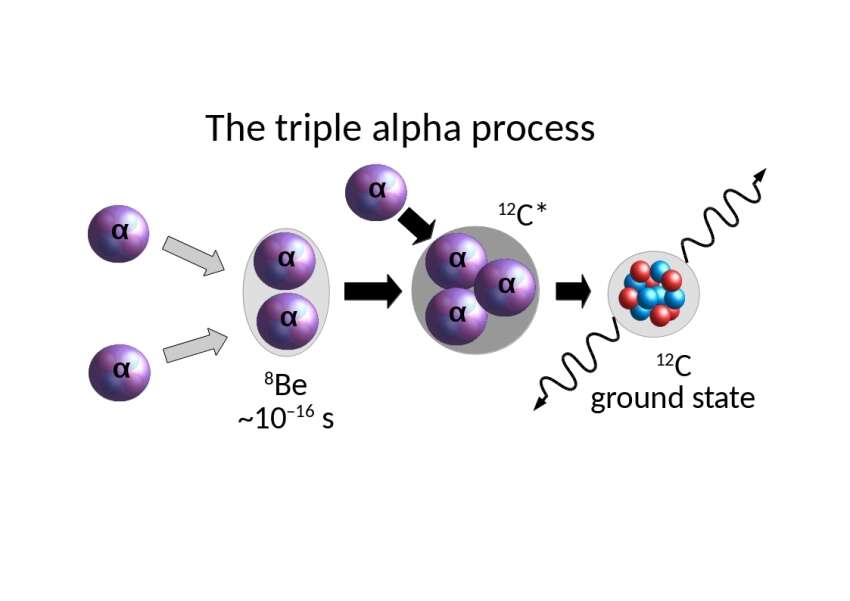 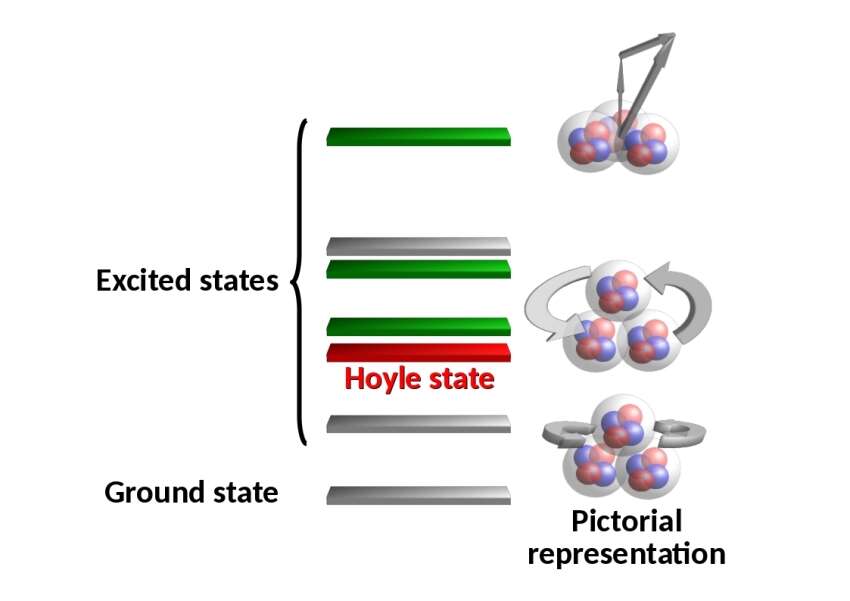 Figure 5: Carbon-12 Levels. Different structures are possible within the same nucleus. As the nucleus becomes excited or heated up the protons and neutron can rearrange and cluster together into alpha particles or other sub-nuclei producing, for example, exotic shapes. The example shown here is for carbon-12. The Hoyle state is a special configuration of three alpha particles and shown in red.

The triple-alpha process takes place in red giant stars at 100 million degrees Kelvin; much hotter than the Sun's core. The formation of carbon-12 in this way is only possible because of the existence of a special three-alpha-like structure in this nucleus: six protons and six neutrons. Even today, more than half a century after its discovery, this enigmatic state cannot be described by conventional nuclear models, but intriguingly, its properties suggest a form of nuclear matter that could condense into an alpha-particle gas.

Fermions and Bosons – behaviour in the quantum world

The conventional picture of the atomic nucleus is that of a quantum liquid of interacting fermions, i.e. protons and neutrons. Fermions, like everyday objects, cannot share the same quantum state, i.e. they obey the Pauli Exclusion Principle .

A different class of particles, called Bosons, have no such restrictions. Alpha-particles, known to be preformed in nuclei, are Bosons and predicted to be able to form a dilute bosonic gas. This new form of nuclear matter would be distinct from all other nuclear matter. In a Bosonic gas the individuality of the nucleons is lost and they can act together with common behaviour. Thus, alpha condensation could be the missing piece of the jigsaw in understanding the structure of nuclear states pivotal to life. Having a complete understanding of the nature of such multi-alpha states could overhaul our view of the atomic nucleus and give us insight into the processes of heavy-element production in the stars.

Elements up to nickel are made in the stars via fusion since this results in a net energy gain through exothermic reactions (see figure 6: Binding energy per nucleon). To make heavier elements, energy needs to be added to the system to drive the fusion process. This happens in the rapid proton and neutron capture processes (rp- and r-processes) and occurs during explosive events such as X-ray bursts and supernovae. One can continue adding neutrons to isotopes up to the neutron drip-line – the point after which the short range of the nuclear strong force becomes insufficient to bind more neutrons in the nucleus. The same is true for protons, but due to their positive charge, the Coulomb repulsion means the drip-line is much closer to stability. This is why there are many more neutron-rich isotopes, as depicted in figure 2: Nuclear Chart. 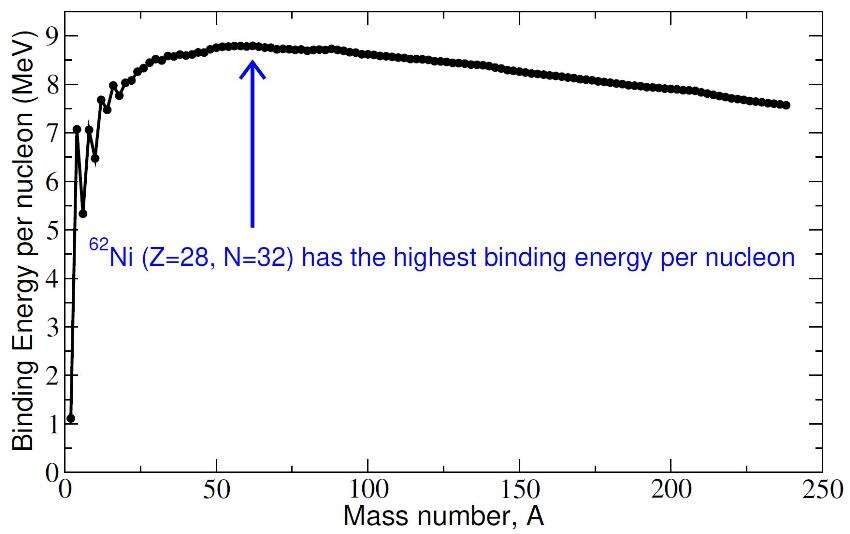 Figure 6: Binding energy per nucleon plot. The most tightly bound nuclei have the highest binding energies per nucleon. Nickel-62 lies at the top of this plot. Lighter nuclei can fuse together, releasing energy. Heavier nuclei can fission; also resulting in an energy release.

The discovery and identification of new elements is possible as they are traceable via their alpha decay to more stable, known isotopes of lighter elements. We still don’t know the limits of the strong force in terms of the heaviest element possible to exist and every few years the Herculean efforts of nuclear physicists enable a new element discovery to be added to the periodic table, with the tally currently standing at 118 – a nucleus with 118 protons.

Even if there are still many uncertainties, one thing is clear – there is still much to be discovered. We are gazing at the stars and trying to understand how it all began and where we are going. These questions may not be answered during our lifetimes but for those who, like me, decide to embark on this journey of discovery – may the strong force be with you!

[1] Electrons are also Fermions and the same principle governs how electrons fill up atomic energy levels, giving rise to all known chemical reactions.