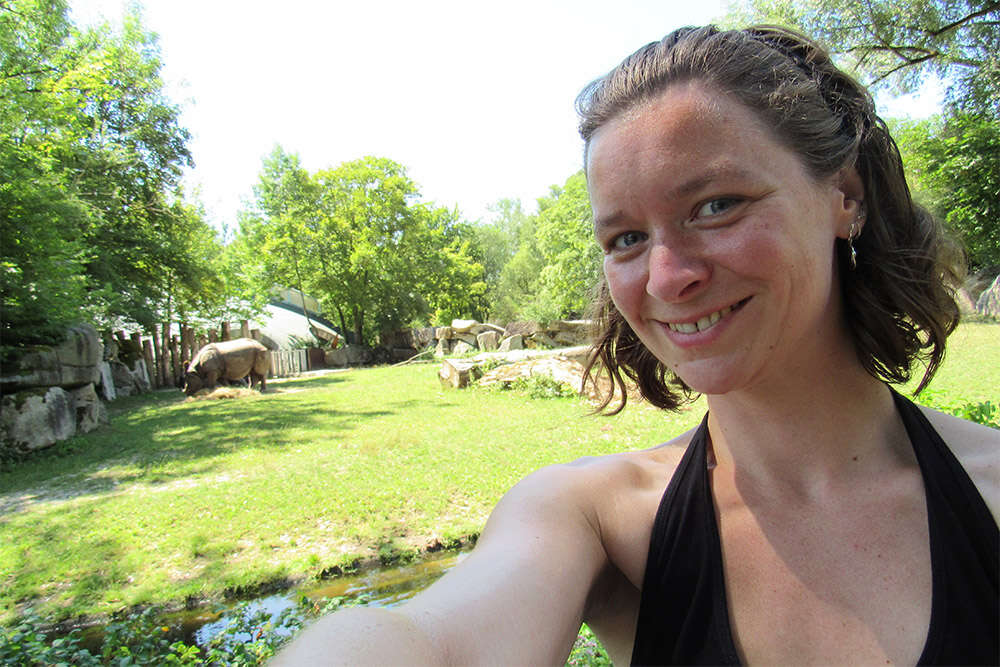 “I think my career shows that you can do a lot with a physics degree – and the things you do can be very varied.”

How did you get to where you are today?
I’m currently working in climate science, but my PhD involved looking at galaxy clusters and how those formed and evolved. After that I did a postdoctoral job in astrophysics at a university in South Africa, but it was when I came back to the UK that I made my first move towards climate science, working at the Met Office, looking at how climate change will affect extreme weather events.

I did that for about two-and-a-half years and then I went back to academia and did this job called astro-ecology where we were using drones, astrophysics thermal cameras and machine learning to find endangered animals and catch poachers.

That was about as much fun as it sounds, but part of the academic thing is that you get fixed-term contracts, so I ended up leaving academia again. For a year I worked in a business as a data scientist developing new types of machine learning and then I saw the advert for the job I’m doing now, looking at how climate change will impact buildings and infrastructure in the future.

What does your job involve?
I get to lead and develop a group of scientists to study the impacts of climate change. Because the results we deliver are largely to people who make investments in property, we can say to them, this is safe, this isn’t, and this is how much it will cost. Because we’re in the finance sector, it has a really big impact on what actually happens – so what buildings do and don’t get built, where people actually invest their money. Since the cheapest path through climate change is if we divest in fossil fuels now and invest in other things, I can present that to people, and it feels like I’m actually doing something good.

My expertise is on the climate side, on everything that happens in the weather, but we also have an expert on flooding, a hydrologist. Once the rain comes out of the sky, where does it actually go and which areas will flood? And we have an expert on geology, looking at things like subsidence, landslides and coastal erosion.

We’re currently developing a flood model where we want to know how much rain you have to put into a valley to make it flood a small town.

What skills have you brought from astrophysics to climate science?
When you’re doing astrophysics you’re looking at things out in space – you can’t really experiment with them, you just look at them. You compare your observations of different types of galaxy to a computer model of how you think that galaxy has formed and evolved. By comparing what you see in the simulation with what you actually see in space you get an understanding of whether or not you’ve understood the physics correctly, and where everything in the universe has come from.

With climate science you have the planet, which is a system that you can’t really experiment with, that you can only really look at, and you have these models of how the atmosphere and the climate has changed and evolved. So in a sense it was very much the same thing, but looking inwards instead of outwards.

A lot of the things I do day-to-day are very similar to astronomy but applied in a different way. A lot of what physicists do these days involves data science, computational methods, big data and machine learning – and you learn a lot of those technical skills by doing a physics degree. But it’s not just a case of messing around on the computer – you have to understand how the physics works to interpret whether what you’ve done is right.

What was it that first drew you to astrophysics?
I had a GCSE physics teacher and she had a way of explaining things that was very exciting. She told us about the life cycle of stars and I was like wow, I want to study that! So I think it was the excitement of space, and the fact that I’ve always wanted to know how things work that drew me to physics.

That’s been my career in a lot of ways – I ended up doing astro-ecology because I thought, that’s cool, I know things about physics so maybe I can apply physics in an interesting way here.

So what is astro-ecology?
Astro-ecology is the best thing I ever made up! We made up the term between the astrophysicists and the ecologists because it was an unusual collaboration.

It came about because an astrophysicist and an ecologist lived next door to each other and we were having a chat over the back fence. The ecologist wanted to use drones to find animals, but animals are camouflaged in their natural environment, so if you put a normal camera on a drone it can be hard to see them. If you put a thermal camera on a drone they become a lot easier to see, because animals are warmer than their surroundings. They look like bright, shiny objects on a black background – a bit like stars and galaxies.

The ecologist wasn’t used to this technology and found it hard to interpret what they were seeing – but we’ve been using infrared in astronomy for decades, so we have tools for automatically detecting objects out in space and understanding what they are. So we thought, maybe we can work together.

The idea was that we would put the thermal camera on the drone with some machine learning as well. As the drone flew around if it saw something that was warm, it would then classify it.

Were you working in the field?
I was mostly based in Liverpool at the astrophysics department, but obviously these animals don’t live in Liverpool, so we went to a safari park to practice and teach the machine learning how to recognise particular animals. But we also got to travel – we saw orangutans in Borneo, saw some wildlife in South Africa, lemurs in Madagascar, spider monkeys in Mexico and I ended up in the Amazon for a while.

Was it always your plan to use astrophysics skills to work on environmental issues?
I can make up a story that sounds like my career was carefully planned, but it really wasn’t. I finished my degree and I enjoyed astrophysics and it was clear to me that a PhD was what I wanted to do next. I enjoyed my PhD so I thought I should carry on doing astrophysics. But the more I was reading about climate change the more I thought this is something important I could possibly help with. Then I saw this job advert for the Met Office which had everything I was doing in astrophysics in it, but applied to climate.

I feel like I was quite lucky to get that job now – but when you have the core physics skills you can pick up the extra bits on the climate side pretty quickly. I wouldn’t say it’s easy, but you can learn it.

What would you say to someone considering studying physics beyond the age of 16?
You should do what you enjoy. Studying things that you’re passionate and excited about will lead you to doing a job that you enjoy. There’s no point switching to something that seems sensible but isn’t interesting, because if you’re 16 you could spend the next 50-60 years of your life doing it.

I think my career shows that you can do a lot with a physics degree – and the things you do can be very varied. If you decide part of it isn’t for you, you’ve got the skills to go somewhere else.

You don’t have to make up your mind about what you want to do with your life when you’re 16 or 18. I didn’t – I just liked science. I still do, and I like to do jobs that I enjoy and find interesting.