Helen Gleeson: determined to use the fund to make a difference

Professor Helen Gleeson, Cavendish Professor of Physics at the University of Leeds and chair of the selection panel for the Bell Burnell Graduate Scholarship Fund, is committed to opening up physics to people from non-traditional backgrounds, having herself overcome many barriers in the academic world. 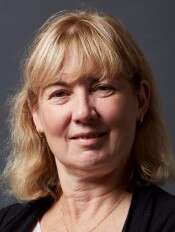 Helen grew up in Yorkshire and her secondary school initially barred girls from studying maths past the age of 14. She pioneered the role of women in teaching physics at universities, becoming the first female physics lecturer at the University of Manchester and then its first female Professor in the subject, before moving to the University of Leeds where she became that institution’s first female Head of the School of Physics and Astronomy. Throughout her career she has had to challenge expectations.

Helen says the number of women studying physics at university is increasing but is still too low – around 20% of the total. “The picture for other groups is equally bad – the proportion who attend from low income households is much lower than it should be, and as for students from ethnic minorities, they are in a very small group.”

Her desire to change physics to make it more representative of society as a whole has led her to chair the selection panel for the Bell Burnell Graduate Scholarship Fund. She has been overwhelmed by the quality of the applications, and has seen the impact of the scheme on the first four recipients of funding last year. “They simply would not have been able to do their PhDs without it.”

Helen is convinced opening up physics is not just a matter of social justice: it’s a way to improve physics. “If we keep physics closed to many groups, we are throwing away a large amount of talent: we want the best people to have the opportunity to do physics, we want to draw on the greatest talent pool, and that means we need to recruit from all parts of society.”