Olivia struggled until her diagnoses for ADHD and dyslexia. But now she is using her past to fuel her own successes in nuclear physics (and gather evidence of humankind’s origins) and to inspire others from similar backgrounds.

My work is based on a branch of nuclear physics called nuclear data. Nuclear data is an umbrella term which encompasses all the information relating to the fundamental reactions responsible for our own beginnings.

It’s human nature to question where we came from and our place in the universe. Studies of nuclear technology and astrophysics depend on this data, so without accurately quantifying the reactions responsible, our understanding will remain limited. Which is where my project comes in.

Since we can’t always recreate the environments where reactions take place, like those that occur in stars, the current data is limited. So we have to get creative. Using new techniques to measure these reactions will result in more accurate data, which can be used for nuclear technology advancements and aid in furthering our understanding of the universe itself.

To be able to take part in these studies where I have the freedom to be creative and explore the inner workings of the world is a real privilege and, given my background, is something I’m extremely thankful for. 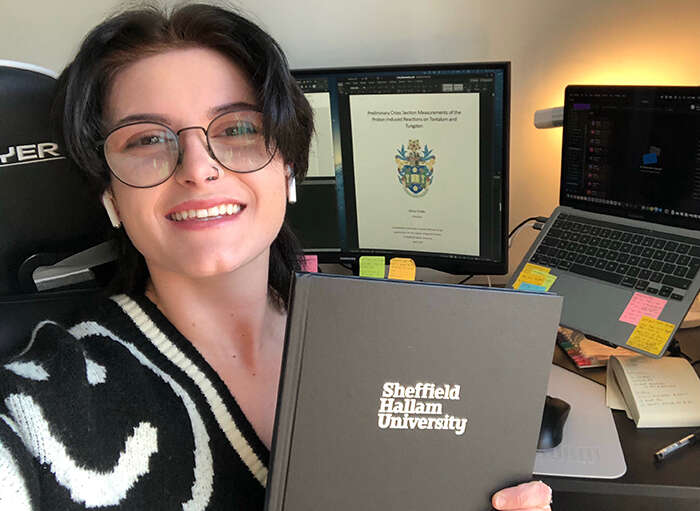 Physics has always been part of my life, though I couldn’t always put a name to it. I was a curious child and could usually be found with my head in a science book. As I grew so did my curiosity, so once I realised this could be made into a career I knew that’s what I was going to do.

Before university I hadn’t really considered which branch of physics to pursue. I knew I loved it but had only really scratched the surface, so couldn’t say for sure what was right for me. My placement year at the ISIS Neutron and Muon Source is really what drove me to continue nuclear physics.

Seeing the endless applications of the field and getting to experience research first-hand was invaluable. I knew at that point I had to learn more.

It's difficult for me to explain exactly why I love physics and what kickstarted my journey. To me, it’s almost like a feeling, an instinct, where I just know it’s right for me.

As a child I took solace in learning about the universe and everything in it. As an adult the same applies. Studying the very things my childhood self was so curious about helps to ground me when life becomes overwhelming. But it’s also just really cool!

When I first read the email that told me I’d won, I cried. The criticism I received when I was younger has always stuck with me, and while my confidence has improved significantly during my time at university, there are still times when I question whether they [the critics] were right. The email reassured me that I do belong in physics and I am capable, despite my differences.

I decided to apply when the 2021 awardees were announced. Before learning about the fund I knew I wanted to do a PhD, but given my disabilities and background I knew funding would be difficult to secure, so I felt pretty helpless.

Reading the awardee interviews made things just click into place and provided me with the rope that would allow me to climb over this barrier.

Knowing that thanks to the scholarship I can pursue what I love, in a department that supports me and without the fear of judgement, is something I will be eternally thankful for.

It’s been quite the uphill battle getting to where I am today.

I was an average student in high school, so once I decided I wanted to do physics the natural progression was to do my A-levels – but this is where things went south.

I really struggled adapting to A-levels. I ended up resitting my first year but still only managed to scrape by and left with Es in physics and maths. It was a difficult time both academically and personally. I lost my dad to cancer during my first year at college and I endured a lot of discouragement and criticism from teachers.

Being told I was incapable of pursuing physics at such a young age was a huge blow and I felt lost. I was told to lower my expectations and do something else – but for me physics was the only option.

Thankfully Sheffield Hallam University offered me a foundation year, something I was never even told was a possibility. My grades did a 180 when I came to uni but I had no idea why, until 2021 when I was diagnosed with attention deficit and hyperactivity disorder (ADHD) and dyslexia.

It was a relief knowing that I could put a name to my difficulties, but at the same time I was angry. Why should a diagnosis be needed to access support? Would I have been better supported in college had I been diagnosed earlier?

I was filled with the “what ifs” for a long time but now I know that focusing on that isn’t worth it. I can’t change what happened and honestly, if I could change it, I don’t think I would. Every difficulty I’ve faced has brought me to where I am now.

I feel extremely lucky to have had such wonderful support at university and I’m proud of how far I’ve come. I managed to keep going, often out of pure stubbornness, but now I realise I want to be the role model I needed when I was 15 and show others who are in similar situations that everyone has a place in physics.

I have three main pieces of advice:

Firstly, don’t let anyone else define your capabilities. That’s something only you can find out, so be stubborn when you need to be and trust your instincts.

Secondly, don’t be afraid to do things differently. It’s easy to compare yourself to others and to focus on the “what ifs”, but physics can’t progress without different perspectives, which come from different backgrounds and experiences.

“Physics should be a community where everyone feels like they belong and their opinions are heard. Working towards this will bring so many new advancements.”

So while you may think the path you’ve ended up on isn’t good enough, it might be exactly what’s needed. Even if it takes you longer or you have to take a different route, none of that matters. It’s not a weakness – different is not lesser.

Finally, do what you love. We’re never promised tomorrow so we owe it to ourselves to enjoy what we do. While it doesn’t erase any barriers that pop up, if you love what you do then it makes it much easier to keep pushing forwards.

If everyone came from the same background, progression would likely be impossible. And yet barriers are put in place to limit those of us deemed “different” from entering the field.

Our backgrounds give each of us unique perspectives and all it takes for the next big discovery in physics is one of these different perspectives to shed new light on a seemingly unsolvable problem.

Physics should be a community where everyone feels like they belong and their opinions are heard. Working towards this will bring so many new advancements but until then some barriers will remain.

If you love physics, and you’re eligible, apply. It’s easy to doubt yourself, especially when you don’t fit with what’s deemed a typical physicist, but this is nonsense. There’s no right way to be a physicist. What makes you a physicist is the fact you are pursuing it in the first place.

There are barriers, yes, but don’t be ashamed of needing some help to overcome them. This is what the fund is for and, regardless of the outcome, having the courage to apply already shows that you have the passion and drive needed to be a physicist.

More of Olivia’s journey can be found in this interview.