The first in her family to achieve any academic qualifications, Elizabeth was nonetheless constantly inspired and encouraged as a child by her electric repairman father. Today, she is investigating the morphology of ice crystals in clouds to help make climate predictions more accurate.

Clouds can be found in many different shapes and sizes, ranging from round, puffy Cumulus clouds at the lower part of the atmosphere, to wispy, hair-like Cirrus clouds at the higher levels. Clouds are made up of ice crystals, water droplets, or a combination of both – and there’s a lot of uncertainty about their impact on what’s called the Earth’s radiation budget. This is the balance between incoming energy from the sun and the outgoing energy from the Earth.

Cirrus clouds are composed of ice crystals and there’s still a lot we don’t know about their microphysical properties due to the limitations of imaging instruments and scarcity of observational data. My research is focused on the investigation of the morphology of different types of ice crystals in Cirrus clouds. 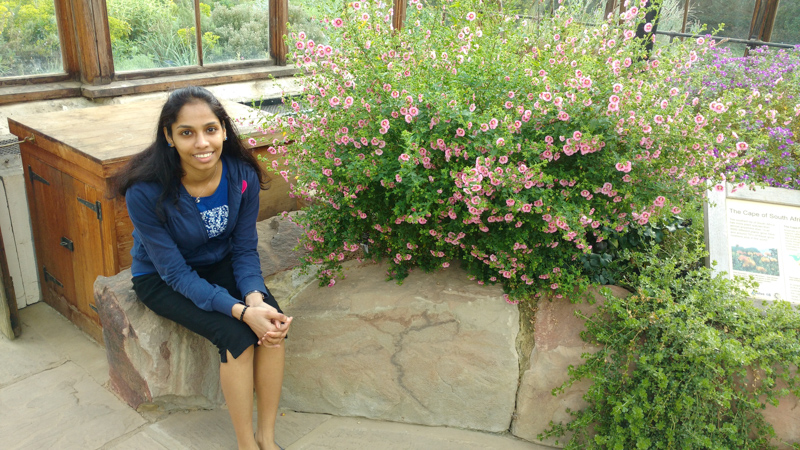 My father, who worked as an electric and electronic repairman, is my greatest inspiration. I always considered science a “cool” subject. From the age of ten, he allowed me to get hands-on experience in soldering and assembling printed circuit boards. Not many children – especially girls – will have had that opportunity. I grew up seeing resistors and transistors around, so I could see what was inside a TV, a VCR or even a tubular battery. These were widespread in India, where I grew up, until the early 2000s.

I also read about Kalpana Chawla [the Indian-born American astronaut and mechanical engineer] and realised that women can excel in male-dominated fields. All of these had an impact on my scientific career, particularly in physics.

As a mother of a toddler, who requires childcare, doing a PhD can be taxing on finances. This scholarship will take the edge off and I can concentrate on my research with one less thing to worry about, as it helps me to cover part of my childcare costs. I am also privileged to have the backing of such a prestigious organisation as the Institute of Physics. It’s certainly boosted my confidence and I feel like my hard work has been recognised.

I've endured many hardships, and they have only strengthened me. From a very young age, I was fascinated by watching the Discovery channel on TV, even though I couldn’t understand much. When I was asked about my ambition, I used to say I wanted to be a scientist, as opposed to my friends who would say nurse. Nursing is a wonderful profession, but I’m against stereotyping it as a career for women. As years passed by, I doubted myself due to various circumstances and tried to avoid the ambition question as much as possible.

In my 12th grade, I was so inspired by my computer science teacher that I pursued it for my first degree, but after graduation I struggled to get a job that suited me. At times I questioned my capabilities and wondered whether I would be successful in life.

I was also interested in space science and after my marriage and coming to the UK I did my second degree in astrophysics. At first, I found it difficult because of the differences in the education systems in India and the UK, the language barrier – etc. But I never gave up and took advantage of the library, maths help centre and mentors.

After my graduation, I had my daughter but, even then, I couldn’t let go of my dream to study more. I started my PhD in atmospheric physics in collaboration with the Met Office when my daughter was just one and I could only provide childcare for two days a week. In the first year of a PhD you have to do a lot of reading, think about what aspect of the topic to research, how to work on it, write an intermediate report, and so on. All this juggling, with sleepless nights on top, made it seem like it was impossible to progress.

Also, during the Covid-19 lockdowns, we – me and my husband, who has full-time job – had to care for our daughter without any external help. We had to take turns and so I had to make good use of whatever time I had to get my research on track. Now my daughter goes to childcare four days a week and I can focus on my PhD. I’m so grateful to my husband, parents and supervisors. Without their understanding, flexibility and trust in me, I wouldn’t have got through the last two-and-a-half years.

“Seek advice where needed and try to maintain a positive attitude to overcome barriers. Keep going even if it looks impossible in the beginning.”

Challenges vary for different people, but everyone faces challenges of some kind in their life. In my experience, I applied for several jobs after my first degree and I’m not ashamed to say that I wasn’t successful. So I had to find opportunities for myself. I’m where I am today because of those rejections, learning from those experiences and working harder. It made me resilient.

I have several female friends who wanted to study something else but were pressured by their parents or by society to choose a career with better job security. I don’t know whether it’s career bias or cultural influence. Even though I’m the first from my family to have any academic qualifications, I’m thankful to my parents, who always encouraged me to study what I’m passionate about.

I would say, seek advice where needed and try to maintain a positive attitude to overcome barriers. Keep going even if it looks impossible in the beginning.

To the students who are struggling at university, try to make use of English language support [for non-English speakers] and specific subject-oriented support like maths and physics support groups, if they’re available.

People come from diverse backgrounds. Their learning experiences and perspectives are unique. Physics itself is a diverse subject and by bringing diverse, bright minds to it, there can only be a very positive impact.

Diversity is also important to remove stereotyping or discrimination. We need diverse role models in different areas of physics to inspire others. We can easily relate to someone from a similar background. I haven’t met many female role models who I can look up to in the field of physics, apart from my supervisor, Dr Evelyn Hesse, who is an accomplished physicist. I believe these scholarships will promote diversity.

I would encourage everyone to apply to the fund who meets the eligibility criteria. There is nothing to lose. And, if you're successful, great! You’ll be able to inspire others by becoming an ambassador.