Scarlett decided that she couldn't ignore the call of science, and returned to university for a second time, to study physics. Thanks to her tenacity and hard work she's going to be exploring the question of whether or not we're alone in the universe.

Tell us about your work and what drives you

My PhD will be at Liverpool John Moores University, in astrophysics, with a particular focus on planet habitability and the stellar environment. I’ll have a fair amount of flexibility to study areas that interest me on my PhD, so the full structure of the course hasn’t been fully formulated as of yet, but initially I’ll be looking at the density of stars in different areas of the universe and the effect that has on the habitability of planets in that area.

Currently, when we model the formation of solar systems and planets, we don’t consider the impact that stars (other than their host star/sun) have on them. The group that I’ll be working in has found that the stars in the surrounding areas may also have an influence on the formation of solar system bodies. Stars form from a cloud of dust, and after they've formed there's still some residual dust left around them.

We call this the “planetary disk”, because the dust then collides and coalesces to form objects like asteroids and planets. My group’s research shows that nearby stars will affect what the planetary disk looks like and how it evolves, changing the properties of the planets that form from it. 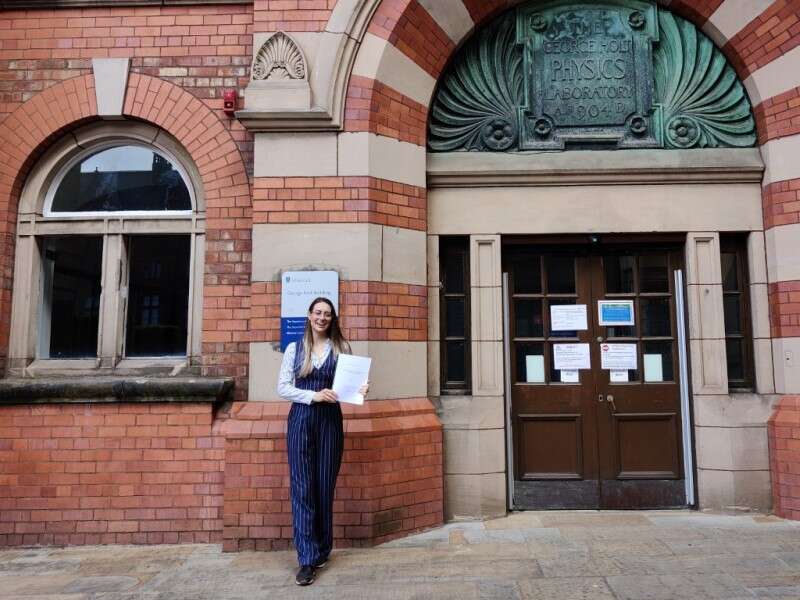 What drew you to this area of physics

I’m really interested in exoplanets – it’s incredibly exciting to look at other planets and see how they’re similar to Earth or, if they’re dissimilar, in what other ways that makes them interesting. This project gives me the potential to look at habitability, which is exciting because we really want to know whether there’s other life out there, and where we should look for it. This is something my project will help to tell us – which areas of the universe we might expect to find life in.

It’s part of that exciting, fundamental question of whether or not we’re alone in the universe.

What does winning the scholarship mean to you, and what difference will it make?

It feels like an achievement to have won this scholarship independently. I experienced a lot of discouragement when I first became interested in science, and physics specifically, and so when I got offered the scholarship and had emails from members of faculty congratulating me, it felt like recognition. It will mean I can stay in Liverpool, a city that I love, and continue my research with this support and recognition.

I was not considered to be very naturally gifted at maths and sciences when I was at school, even when I started to enjoy them, and I was only predicted C grades at GSCE. Even when I worked really hard and got As and A*s in GCSE maths and science, I was discouraged from further science study by some of my teachers, and also my family, because they saw how hard I worked at GSCE and it seemed to them that it was really difficult and stressful.

Because of that I didn’t end up taking any of my higher levels in science at sixth form. I took the International Baccalaureate rather than A-levels because it meant that I could study six subjects, including all the subjects I would need to get onto an arts degree at a level equivalent to A-levels, as well as physics and maths at a lower level.

In the end, I went on to uni to study Spanish and German. I’d received an offer from UCL, and everyone was really excited about that, especially because I was the first person from my family to go to university. And even though I was having doubts, I just thought “right, let’s just do it”. I didn’t really know what to expect the first time I went, because no one I knew had been, and it was lot harder to adjust than I thought.

I ended up leaving the course in my first year and going home to work. A couple of years later I went back to college to do full A-levels in maths and physics, and then I finally went back to university – this time to study physics. Second time around, I was really ready for it. I knew what to expect from uni life and I was excited about what I was studying.

“If you definitely know that you want to do something, you have to do it, no matter what other people are saying, or you’ll just regret it.”

When I said I wanted to do physics I think my family just thought I was a bit of an alien! No one really likes science in my family so they were a bit shocked. I think some of the initial discouragement I faced from doing physics was because it didn’t seem like I was naturally amazing at it, because I had to work hard for my grades, and because it’s seen as a male-dominated field.

If you definitely know that you want to do something, you have to do it, no matter what other people are saying, or you’ll just regret it. If you don’t see people like you in that field, that doesn’t mean that people are going to be unwelcoming to you, and there will be loads of other ways to find friends beyond just your course. For example, I’m a member of the LGBTQ+ society at my university and I’ve met loads of friends through that.

And don’t be afraid of making a change, because if you know what it is you want to do, that feeling isn’t going to go away until you do it. I would recommend looking at all the options available to you. If you’re over 21 or over 25 then there are specific funding streams open to you, for example. I’d recommend starting by looking at the options open to you, and weighing up the pros and cons.

When I left my undergraduate degree in languages there were some family members who thought I should've just finished the course so that I could start working and earn money, but in the longer term the kinds of roles that would be open to me through a physics degree are potentially higher paying, which was a good rebuttal! It’s important to weigh those things up. And finally, think about if it’s going to make you happier. If your quality of life and happiness is going to improve by doing it then that’s what’s really important.

I think it’s so important to get a range of viewpoints. Everything about you, your cultural and social background, everything about how you grew up is going to have an impact on how you think, what work you produce, and how you produce that work. It’s important to have a range of people working together so you then get the biggest range of viewpoints. If you have an architect working on a project who has a disability, for example, they’re going to recognise accessibility issues in a building plan that other people on their team might not.

If you’re looking at the BBGSF website then you’re most likely in the last year of your physics or related degree, already have a degree, or are on a PhD, so you’re already doing pretty amazingly! If you look around you and maybe feel like you have a bit less research experience or slightly lower grades than your peers, ask yourself whether that’s actually true. Then ask yourself whether you’ve been offered the same opportunities as them throughout your life or whether you’ve had to deal with any barriers that put you at a disadvantage. The whole point of this fund is that it’s for minority groups who might have faced barriers, and who maybe haven’t had as many opportunities as other people.

What’s more, the interview was one of the nicest I’ve had and everyone was really helpful and understanding, so the application process itself is nothing to be scared about.