Female and Asian, Mei Ting has often had to battle against the status quo. But she persevered and now models the atmosphere of far-off planets – could her work lead us to other lifeforms?

I model the atmosphere of exoplanets, which are planets outside of our own solar system. I’ve always liked to imagine what the weather is like on other planets. Are they similar to Earth’s climate or are they very weird?

Obviously we can’t set foot on other planets yet but modelling their climate makes me feel like I’m staring straight into their atmosphere! This is why I’m drawn to this area of research.

When people talk about exoplanets, I guess one of the biggest questions in human history is whether we are alone in the universe. To answer that, we have to first look for potentially habitable exoplanets, which are planets that allow liquid water to exist on their surface. Then we can look for any biosignatures, which are indicators of life.

A lot of work has been done on this exciting area, but not a lot has been done to study the impact of aerosols on these exoplanetary atmospheres. Aerosols, which are liquids/solids in the atmosphere like clouds, can cause a dramatic impact on the climate.

They can affect the habitability and even obscure biosignatures and trick us into believing that the planets have no lifeforms. I am studying the effect of these aerosols on the atmosphere, hoping we can provide a more quantitative model to interpret the existing and future data. 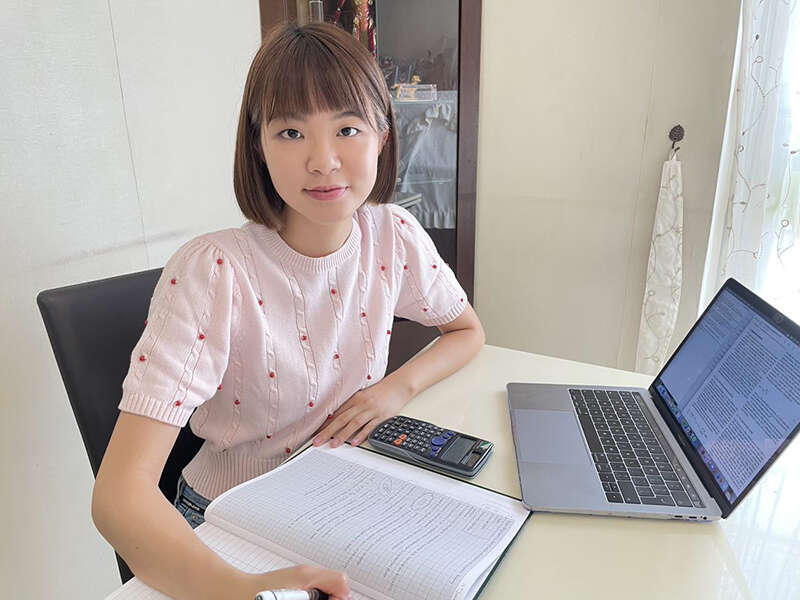 I have always been interested in physics. Ever since I was a kid, I have always thought that as a resident living on this planet witnessing so many mind-blowing phenomena happening around us each day, it is our duty to understand and explore the nature of these things. Otherwise, we're wasting all these amazing gifts! That’s why I chose physics for my undergraduate degree.

Learning that there are so many worlds out there when I look up on the night sky, I’m more and more curious about planets and their atmospheres. One of the things that I like to do is to imagine a future on Earth where we have weather forecasts for different planets so that we can know what their climate's like before we go there for vacation.

These "silly" ideas really motivate me into studying the atmospheres of different exoplanets.

It means a lot to me. I have been working really hard to get to this point. Studying in a foreign country and speaking a different language during my undergraduate degree sometimes made me feel quite lonely and tired on this journey. Very often a part of me will just wonder if all my hard work is really worth it and if I am even capable of doing research.

So seeing myself taking on a PhD with this scholarship really boosts my confidence that I am on the right track and it makes me realise that my hard work and passion are recognised by others.

It also gives me a lot of comfort knowing that I don’t have to worry about the extra financial burden which would be placed on me, especially the international tuition fee, and I can fully concentrate on my research.

Being an Asian female studying science, I have faced discouragement from others simply because of my gender and skin colour. I have even had a teacher saying straight to my face that if men can’t solve these problems, I won’t too.

When I was a teenager, I would sometimes wonder if those people were right and that maybe I could never become a true scientist. But having come to the UK and met both male and female physicists who are very brave to chase their dreams, I have realised that everyone should receive equal and fair opportunities to shine. What we value the most in the science community is our mind and all those “strange” ideas, not our gender and skin colour.

“There will always be people out there who don’t believe in you and think that you won’t succeed – but your aspirations should not be defined by what other people think of you.”

Also, when I was younger, I didn’t know anyone who had followed a career path in academia. There was no role model for me to look up to and I have always felt unsure of whether I have chosen the right path.

But talking with like-minded people has made me understand that it's OK to try new things even if they look very scary at the beginning. We'll always make new friends along the journey and the path will become clearer and clearer as we take each step forward.

I understand how frustrating it can be when people around you think that you will never make it. I have been there before and it really sucks. However, one of the things that I have learned on the journey to becoming an astrophysicist is that there will always be people out there who don’t believe in you and think that you won’t succeed – but your aspirations should not be defined by what other people think of you.

Just remember that you are definitely not alone and there are plenty of people out there who would like to help but they just don’t know you yet. So don’t be afraid to speak up and chase your dreams.

Once you start shining, your light will be seen by others. Not only will you attract more like-minded people, but you will also make those who have once laughed at you realise that they couldn’t be more wrong.

What drives the science community to move forward is imaginative minds and brilliant ideas. People from different backgrounds may have very different experiences which allow them to look at things from perspectives that may not have been thought of by others.

And to solve the mysteries in the universe, we need to gather as many scientists as we can to work together for this common goal. This is not the place to divide and say who is more encouraged to study the nature of things.

Ultimately, I think that all scientists working today, or in all human history, are just working together as a team. We’re able to discover new things today because people in the past have built a strong foundation for us and provided what we need to make each new step. And what we’re doing today is paving the road for the future generation so that they can lead the next steps of human advancement.

Go ahead! It will never hurt to try. If this is what you want to do, you should follow your heart and go ahead. This fund is not about having the highest grades or the most impressive CV. It really comes down to whether you want to create an encouraging and more equal environment for current and future physicists.

So don’t worry if you don’t have the strongest profile. At the end, regardless of whether you win the scholarship, it is still a very rewarding experience as it makes you reflect on why you want to pursue physics and how we can encourage other under-represented people to do whatever they are passionate about.