School sixth forms with no entries for A-level physics

This report is based on a statistical investigation of the physics uptake in schools that offer A-levels in their sixth forms. The uptake of A-level maths is also included in places to align this study with the Department for Education’s research that was publicised in The Guardian.

Introduction to the report

This study aims to refresh the work on physics uptake in schools that offer A-levels in their sixth forms by using up-to-date data, and to extend upon it by including school size, school type, and the gender of students at school sixth forms both with and without physics entries.

There are 2,591 school sixth forms in England and 235 of them have no students taking AS or A-level physics. The purpose of the statistical investigation was to determine whether there were any patterns in the data and any underlying causes for the zero entries.

The report also makes the important distinction between schools that do not offer physics A-level and those that offer it but have zero take-up. If schools do not offer physics, then they present a subset of their students – those wanting to study physics and/or maths A-levels who want to stay at (or join) the school – with a dilemma: compromise their choice of subjects or go to another school.

If no one chooses to take physics in a school, then the problem is a different one. This separate issue may be more reflective of the experience that they had in the school they attended to the age of 16. This is more usefully examined by looking at schools that do not send students on to A-level physics rather than at schools that do not enter students at A-level. This analysis appears in part in the Institute of Physics publication It’s Different for Girls: The influence of schools. 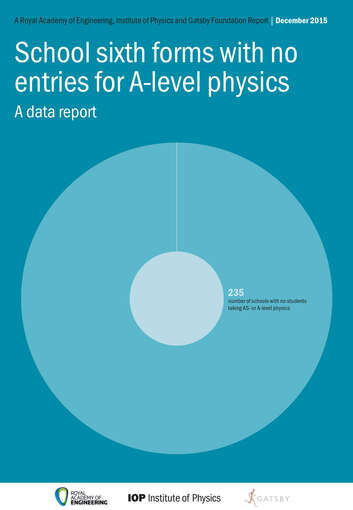 School sixth forms with no entries for A-level physics