A relatively new discipline, astroparticle physics encompasses two distinct but complementary approaches to modern science. In one, the universe is used as a source of radiation with which to conduct frontier investigations, while in the second, the radiations emanating from space and detected here on Earth are used as unique probes of distant astrophysical environments. For example, the highest energy particles known to exist hit the atmosphere at energies several orders of magnitude greater than those produced in the Large Hadron Collider (LHC), and thus allow, in principle, experiments in particle physics in an otherwise inaccessible energy regime.

The origin of these particles remains a mystery, but is certain to involve extreme astrophysical environments. In this case, and more generally, astroparticle physics lies at the intersection of particle physics and astronomy, probing both the smallest and largest scales, and informing particle physics beyond the Standard Model, and astrophysics at the limit of our present understanding.

Within the UK, the situation is a little clearer, largely due to recent funding decisions. Subjects within the banner of astroparticle physics include the study of cosmic rays, direct detection of dark matter, gravitational wave research, and very high-energy gamma rays. Where experiments or observatories are sensitive to astrophysical neutrinos, this too is included, and within the context of the IOP Astroparticle Physics Group, nuclear astrophysics is also embraced.

All of these areas are seen as within the STFC portfolio. New projects are funded through specific planning lines and, because no dedicated astroparticle physics grants line exists, exploitation of existing projects is variously funded through the grants lines of particle physics, astronomy or nuclear physics, or for gravitational waves, through a dedicated grants line. Oversight of the area, and long-term strategy, are considered by a Particle Astrophysics Advisory Panel that reports to STFC Science Board.

For clarity, it should also be stated that theoretical cosmology is not included within astroparticle physics, so that subjects such as baryogenesis, dark energy and inflationary models are considered elsewhere, even though there is significant scientific overlap between the areas.

In 2006, in response to a widely recognised need for distinct UK representation of the field, the IOP Astroparticle Physics Group was formed. Its membership presently stands at more than 600, with activities mainly focused on the support of themed meetings and PhD student development. 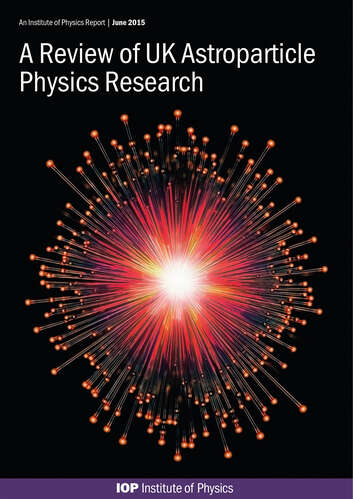