Opening Doors: A guide to good practice in countering gender stereotyping in schools

The Institute of Physics has been investigating and working on the problem of gender imbalance in subject choice for many years. The Opening Doors project is the latest piece of work to gather evidence and identify aspects of good practice in this area.

This guide is the main output of the Opening Doors project. Its purpose is to identify barriers to countering gender stereotyping in schools and to provide some suggestions, based on observations during the project, that can be put into practice and investigated further.

In 2012, the Institute of Physics published its statistical report It’s Different for Girls. The analysis showed that, for a girl that does A-levels, the likelihood of physics being one of them strongly depends on the type of school she attends.

The inference drawn was that school culture is a substantial factor in determining subject choice. In 2013, Closing Doors built on that work and looked at progression from GCSE into six A-level subjects that display gender imbalance: English, mathematics, biology, physics, economics, and psychology.

The results showed that 81% of state-funded, mixed schools were either maintaining or exacerbating the already poor gender bias of progression into these subjects.

Moreover, to improve upon the ratio of 21% of girls doing physics nationally, schools needed to be reducing the imbalance in the other subjects too, providing further evidence that school culture is an important factor.

The Opening Doors project was co-funded by the Government Equalities Office and the Institute of Physics. The remit of the project covers all subjects and all aspects of school life, and there is no emphasis on any particular area.

Its chief purpose was to generate this guide on good practice based on visits to schools and discussions with staff and students. The visits took place in 10 schools in two networks – one based in the south west of England, in the Bath area, and the other along the south coast.

A panel including a gender expert and at least one teacher from another school in the network spent a day in each school, speaking with teachers, support staff and management teams. They also had lunch with around a dozen students segregated into gender groups. After each visit, a confidential report was sent to the head teacher of the school, highlighting good practice observed, together with any issues that were noted.

Those reports form the basis for this guide. In almost every case, the examples of good practice cited were seen in one or more schools; the barriers identified were, however, seen in essentially all the schools. 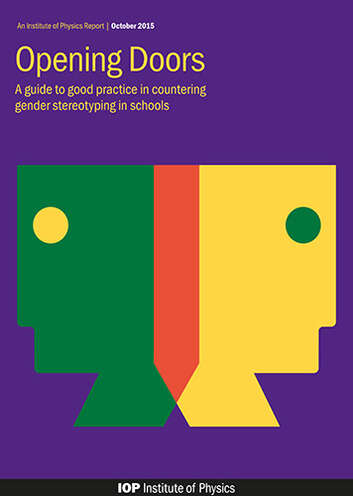 Opening doors: a guide to good practice in countering gender stereotyping in schools

Download the report
A snapshot of girls’ uptake at A-level