Next Steps for Hydrogen: Physics, technology and the future

Hydrogen has been proposed as an energy carrier for more than 40 years. Hydrogen is not a fuel in the conventional sense, as it must be manufactured using primary energy resources. As such, it has similarities to electricity, but it differs from electricity in several key respects relating to cost, storage, safety and transport.

At the turn of the millennium there was much interest in hydrogen as a potential low-carbon energy source for vehicles. In the ensuing years, however, enthusiasm and research budgets diminished in the face of higher than expected costs, technical difficulties and competition from rapidly improving battery technology for electric vehicles.

Consequently, in recent years there has been reduced interest in hydrogen as a clean energy carrier. New circumstances, however, are starting to prompt a resurgence of interest.

Drivers of a hydrogen resurgence include growing concern regarding the availability of metals required for advanced batteries, fire safety concerns around battery technology, the rapid growth of natural gas as a primary fuel (noting its role as the precursor of conventional and current hydrogen production) and a growing recognition that liquid hydrogen at 20 K, or –253 °C, can act as a substitute for liquid helium.

In this role, hydrogen would not only be an energy carrier, but also a cryogenic liquid substituting for 4.2 K helium in a world of rising helium prices.

Another important driver for hydrogen has been increasing policy enthusiasm for renewable electricity production. Most renewables, including wind and solar energy, have time varying output depending on the weather or the rotation of the Earth.

Sometimes, renewables are described as being “intermittent” producers of power but this terminology can mask the reality that in many respects renewable-energy variability is predictable.

High renewable-energy scenarios motivate a radical rethink of the role of energy storage, and hydrogen may have an important role to play. Such thinking figures prominently in the European Union’s energy-systems planning.

This report gives emphasis to technological insight and innovation emerging from laboratories and stresses how this is contributing to the renewed interest in hydrogen. 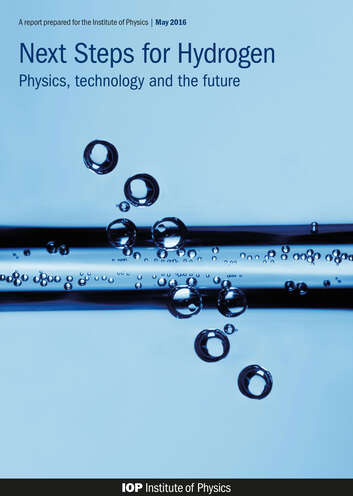 Next Steps for Hydrogen: Physics, technology and the future