Cryogenics engineer presents on pioneering technology at final of the science communication competition at the Royal Institution.

The winner of this year’s Three Minute Wonder competition is Ocean Bach, whose presentation on a Stirling convertor currently under development – which could advance space exploration – took him to first place last night.

Stirling convertors are engines that convert heat into electricity, and have the potential to significantly reduce the amount of plutonium fuel required in space travel.

The two runners up were Gavrielle Untracht, who showed that size does matter when developing new tools for multi-scale imaging of tumours, and Ian Roque, who showed how we measure the cosmic dark ages.

The competition involves a series of regional or national heats, depending on location, and the winner from each national or regional heat goes through to the Grand Final.

Contestants must explain their work to a panel of established science communicator judges, in front of a non-specialist audience.

All competitors must work in physics or a physics-related field in academia, business or industry. They can only use one slide and one video, but can add as many other props as necessary into their presentation, with the aim being to really bring the science to life for the audience.

The evening saw finalists from across the UK and Ireland enthusiastically, loudly – and most of all quickly – describe ground-breaking physics research to a panel of judges in just three minutes.

The competitors were all very worthy finalists, and were following in the footsteps of some legendary scientists – albeit at a trot. 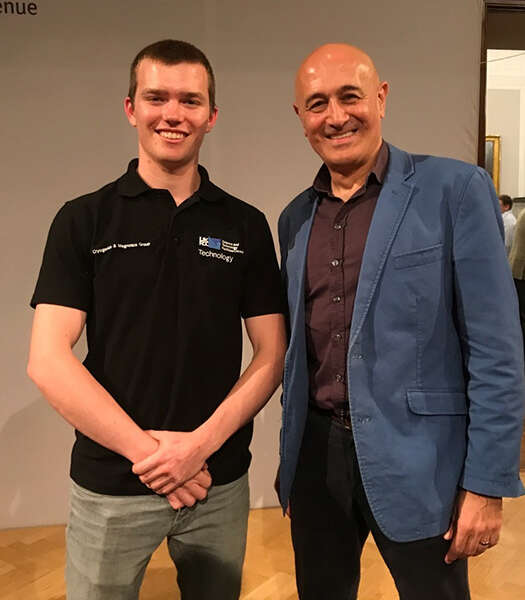 Designed by Thomas Webster in 1800, the Royal Institution’s historic lecture theatre is famous for being a location where many great scientific minds have presented and shared their research.

The first UK demonstrations of the telephone and of a phonographic recording took place in there, and Charles Darwin himself is known to have sat in the auditorium.

The venue is, however, perhaps most well-known for the Christmas Lectures which have been hosted by the Royal Institution and held there since 1825 and televised annually since 1966.

Michael Faraday inaugurated them to bring the world of science to young people, in a time when not everyone was able to receive a proper formal education.

Describing his experience afterwards, Ocean Bach said: “Being able to present in the Royal Institution was fantastic, and it was really fantastic to meet all the judges. I really hope I can build on this in my future and do more outreach.”

Speaking about the competition, Mark Telling said: “I am really proud to have overseen Three Minute Wonder for the past decade. For me, it is an inventive, inclusive and inspirational competition which showcases both the passion and talent in science, technology, engineering and mathematics across all physics-related employment sectors.”