Stories from physics – the value of storytelling in teaching and learning

The Jackanory-style evening showcased how stories have a powerful effect on long-term memory formation and retrieval.

Are you sitting comfortably?

Last Tuesday, during national storytelling week, authors Ben Rogers and Richard Brock took to the stage of the IOP’s state of the art theatre and delivered a Jackanory-style evening compelling enough to rival the popular teatime storytelling television show – and its lunchtime radio forerunner, Listen with Mother.

Since time immemorial, storytelling has been part of human life. Even before the advent of the written word storytellers were considered to be distinctive members of society. Storytelling was a vocation.

Storytellers finely honed their language skills, and developed effective communication styles that embraced sensitivity and insight. They drew virtual pictures in the mind’s eyes of their audiences; pictures that enabled them to explain complex ideas in ways that made them understandable and accessible.

Today, teaching through storytelling is being recognised as a technique that introduces reflection to learning and through which links can be forged between theory and practice. Its potential as a means to facilitate learning within science education, as well as in other subjects across science and the arts is now being harnessed, with formalised storytelling being used as a creative tool in teaching and learning.

Ben, author of The Big Ideas in Physics and How to Teach Them, kicked things off to explain this. With a lesson in how stories are ‘psychologically privileged’ he explained how a story, when used to contextualise something that is being taught, can have a powerful effect on long-term memory formation and retrieval; two of the functions that underpin learning. 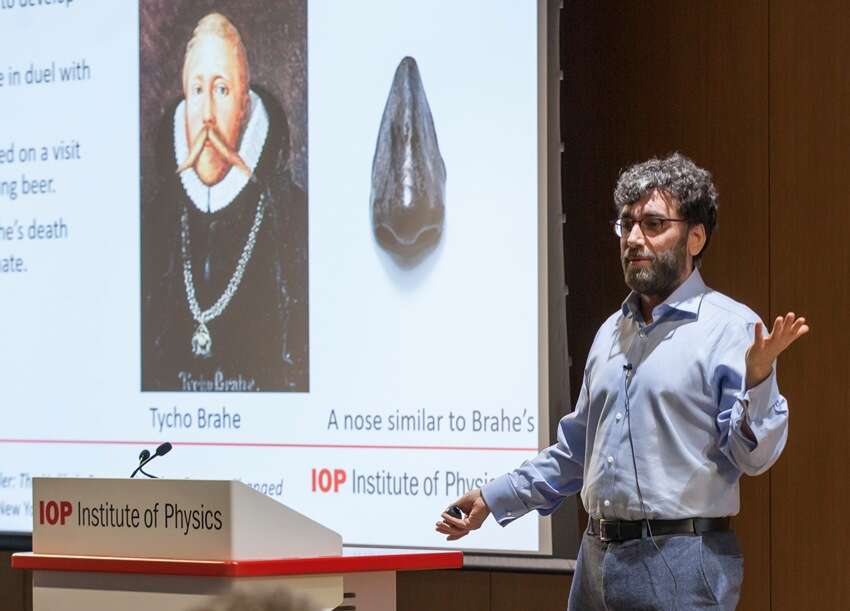 Richard took to the stage next to regale the audience with some of his entertaining, and of course memorable, Stories from Physics.

Who knew that upon constructing a large voltaic pile, the discoverer of UV radiation Johann Ritter decided to ‘marry his battery’ and went on to test the effects of current in mind-boggling ways?

The idea of electrogustation was introduced with a story about Johann Georg Sulzer, a Swiss professor who induced tasted by applying an electrical current to his own tongue. Such experimentation was perpetuated by the much more recent ‘digital lollipop’ that simulates a range of tastes on the tongue corresponding to different electrical currents.

And few members of the audience are likely to quickly forget the story about engineer Roger Babson. A fan of Isaac Newton, Babson wanted to do away with gravity, considering it to be responsible for millions of accidents and deaths every year.

Describing it as ‘our number one enemy’, he set up the Gravity Research Foundation to explore ways of developing ‘antigravity’, even providing attendees with ‘gravity chairs’ to assist circulation at its first meeting in 1951. He also promoted an ‘antigravity pill’ and donated money to a number of institutions to fund research into antigravity devices.

Babson is commemorated for his philanthropy on a monument at Tufts University. It carries the inscription: “This monument has been erected by the Gravity Research Foundation... It is to remind students of the blessings forthcoming when a semi-insulator is discovered in order to harness gravity as a free power and reduce air-plane accidents.”

The complete versions of these, and many other stories, can be found in the set of booklets Stories from Physics, which are available to download.

The event was the culmination of a Storytelling in Physics CPD Day, organised by the IOP.