Medals for outstanding physics research on stars, Mars and quasars

Three physicists among the early career researchers recognised for their work at an annual showcase for the UK’s thriving science and engineering base.

Three young physicists have been recognised for their wide-ranging research at the esteemed STEM for Britain competition, which this year took place online earlier this month.

STEM for Britain, run in collaboration with the IOP, is an annual poster competition that aims to help politicians understand more about the UK’s thriving science and engineering base, and rewards some of the strongest research being undertaken in the UK.

Usually held in the Houses of Parliament, it involves approximately 200 early career researchers, is judged by professional and academic experts, and is the only competition of its kind in the UK. Below are the medal winners in the physics category. 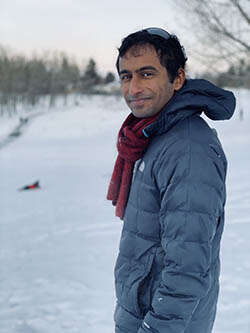 Benjamin Fernando, a postgraduate research student at the University of Oxford, not only won Gold but was also awarded the Westminster medal, making him the overall winner of this prestigious event.

For four years Ben has been adapting a state-of-the-art seismic modelling code, to realistically simulate the propagation of seismic waves in the ocean. Seismology allows us to visualise beneath the surface of the Earth, including the oceans, and investigate geophysical problems, to help determine why and how earthquakes begin and why some are more destructive than others.

The primary source of ‘seismic noise’ on Earth is actually oceanic, and the most powerful and destructive earthquakes happen below the seafloor.

The use of seismology in oceans can also be used to detect deep-water temperature changes associated with a warming climate, monitor storms far out to sea, and also help ensure global security by monitoring explosive activity.

There is a real need, therefore, to develop software capable of realistically simulating these phenomena, and this is exactly what Ben has been working on.

As part of this work, he and his colleagues investigated the effects of the ocean and depth of its seafloor on the propagation of waves from a powerful earthquake which occurred in Papua New Guinea in 2015 and generated a tsunami.

As part of the Science Team for the Nasa InSight Mars Lander mission, Ben was able to model wave propagation in the Martian atmosphere by making use of the similarities between this phenomenon in the oceans and in the atmosphere.

InSight (Interior Exploration using Seismic Investigations, Geodesy and Heat Transport) is designed to give Mars its first thorough check-up since it formed 4.5 billion years ago. It is the first outer space robotic explorer to study in-depth the ‘inner space’ of Mars: its crust, mantle, and core.

He receives a £1,000 prize and a Gold medal, plus the coveted Westminster Wharton Medal.

Ben said: “It’s a real privilege to have won this award, and to see the amazing posters from the other medalists. My thanks to the organising committee for their work to enable this to happen remotely, and I encourage all fellow early career researchers to take part next year!” 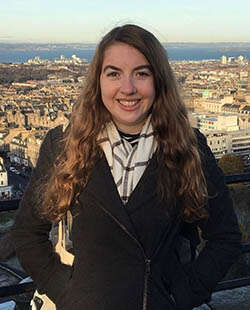 Victoria Fawcett, a postgraduate research student at Durham University, won Silver, receiving a £750 prize and a medal. For her PhD project, Vicky has been investigating quasars, their properties and how they may link in galaxy evolution.

Quasars are astronomical objects, powered by gas, that spiral at very high velocities into extremely large black holes. They are found in the centres of some galaxies, and outshine the entire galaxy they sit in.

Most appear very blue, but there are some that show much redder colours.

By researching the properties of these red quasars, Vicky and her team have added weight to an emerging idea that red quasars are fundamentally different objects to blue quasars. The differences they have found could indicate that red quasars represent an important phase in galaxy evolution.

Vicky said: “In my research, I have found fundamental differences in the radio properties of red quasars that support this evolutionary model. Radio data – the same waves that you get from the radio you listen to – tell me about mechanisms close to the supermassive black hole in the centre of the galaxy.”

Analysing radio data from a sample of red and blue quasars, Vicky found higher levels in the red quasars compared to the blue quasars.

She continued: “I also found this enhanced radio emission to be on very small scales, rather than the huge galactic jets we sometimes see, which suggests this emission is driven by out-flowing material such as winds. This outflow could have a big impact on the host galaxy, and shape how it evolves.”

Vicky’s work implies that red quasars could be a crucial element in galaxy evolution models, which could ultimately help us understand how the billions of galaxies in our universe, including the Milky Way, evolved from the big bang.

On winning Silver, she said: “I am so happy and honoured to have won this award. It was really interesting trying to communicate my research to such a wide audience, and to summarise everything in three minutes [at the presentation] was quite difficult.” 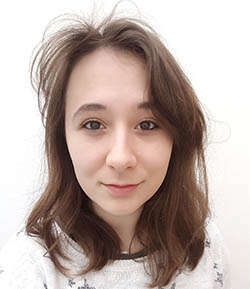 Heidi Thiemann from Olney in Buckinghamshire, a postgraduate research student at the Open University, won the Bronze award and receives a £500 prize and a medal.

For three years, Heidi has engaged with over 8,000 members of the public through a platform called ‘the Zooniverse’, devising methods of counting and identifying rare kinds of stars, to expand our knowledge of the universe.

So far, Heidi and her team of ‘citizen scientist’ volunteers have sifted through observations of 1.6 million variable stars, to identify the most extreme and unique ones.

They have discovered over 300 new variable stars, which periodically change in brightness, as well as a new type of binary star system. These new binary stars are made up of two red giant stars orbiting one another so closely that they touch one another, and they may one day merge and cause a rare, stunning stellar explosions.

These types of stellar explosions have only been observed a handful of times, so this discovery is extremely exciting.

Heidi said: “I'm really happy to have been awarded the Physics Bronze award at STEM for Britain 2021. It was a great experience to represent The Open University to the Parliamentary and Scientific Committee and showcase the groundbreaking work we’re doing in astronomy in the School of Physical Sciences.

“I personally enjoyed talking with MPs about how we can engage the general public in astronomy research to produce real scientific results, and how we can use astronomy as a great educational tool to get people excited about science.”

STEM for Britain was established by Dr Eric Wharton in 1997. Following his untimely death in 2007, the Parliamentary and Scientific Committee revived the competition to further his legacy, and the Westminster Wharton Medal is presented in his honour.

The competition includes categories for researchers who are chemists, biologists, engineers and mathematicians. The finalists presented their research to politicians and a panel of expert judges, via an online platform on 4 March (the winners were announced on 8 March).

There are only three awards in each category, and after a few days of deliberation the winners were announced.

The IOP support the event and provides the judging panel for the physics prizes. Jonathan Flint CBE, president of the IOP, said: “STEM for Britain provides a unique opportunity for some of our outstanding young and early career scientists to present aspects of their work to policymakers.

“This enables MPs to find out first-hand about some of the groundbreaking research taking place here in the UK.

“Unable to be in the Houses of Parliament this year, they all had to rise to the challenge of presenting their work remotely via an online platform, making the communication of already complex scientific concepts much more of a challenge.

“I warmly congratulate the winning participants, but every single finalist should be very proud of what they have achieved. I do hope they all enjoyed the experience.”

With only three prizes in each category, it really is an achievement to be a medalist at STEM for Britain.

This year, the judges also made special honourable mention of another young physicist, Maria Violaris, from the University of Oxford. Maria’s poster, describing how her research has uncovered a new type of irreversibility in computation, impressed the judges so much that she really couldn’t be left off the roll of honour.

Next year, the organisers hope to return to parliament for 2022’s event.

Find out more about STEM for Britain.