Four schoolgirls from Leicester have been announced as the winners of a national competition from the Institute of Physics (IOP) – scooping £1,000 for themselves and £250 for their school, Avanti Fields School.

Prarthana, Anaiya, Serena and Dhariti, all in year eight, have won the first annual Eurekas – a competition that saw students aged 11-16 across the UK and Ireland take up the challenge to answer the question: what’s the point of physics?

Baking a cake in the shape of a cochlear implant, the group impressed the expert judges by delving into the physics behind the devices helping so many people communicate every day, scoring top marks for originality and creativity, quality, relevance and spirit.

Whether the entrants were arty, sporty, musical or into literature, languages or sciences, the judges were looking for submissions from students with a range of interests – not just those already interested in physics.

The Eurekas is an initiative by Limit Less – an IOP campaign designed to broaden and diversify the range of young people going on to study physics after the age of 16 by getting students to see physics differently. 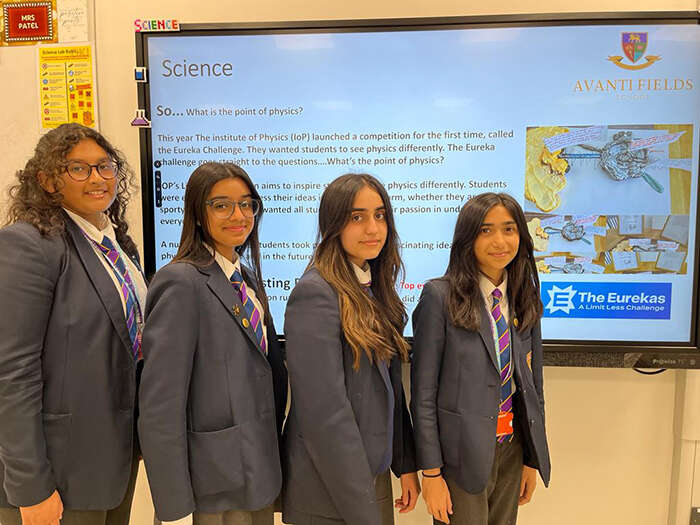 Rachel Youngman said: “We were all incredibly impressed by the quality of entries submitted for this first year of The Eurekas. It was amazing to see how the young people tapped into their passions and produced such thoughtful work.

“We wanted this competition to be a celebration of creativity, culture, collaboration, diversity and activity – all underpinned by physics themes – and it has certainly achieved this. Our thanks go to every single young person that took part, and I’m already excited to see what next year’s competition brings!”

Shivani Dave said: “The standard of entries was incredibly high, it was wonderful to see so many people find their interpretation of the starting question ‘what’s the point of physics’ and really let their creativity flow.

“If these entries are anything to go by, the next generation of physicists are going to achieve some incredible things. I was so honoured to be a judge, everyone should be incredibly proud of what they submitted.”

Femi Fadugba, said: “The incredible quality of each submission made the selection process as painful as it was rewarding! Ambitious, imaginative, and beautiful, this stuff – the future of physics is bright.”

The Eurekas was launched after it was revealed parents who did not enjoy physics at school may be unwittingly putting their children off the subject and could be contributing to the diversity problem faced by the profession.

Some 46% of parents describe physics at school as ‘complicated’, a third say it’s ‘difficult’ and only 17% say it’s ‘creative’, according to the results of a 2020 Censuswide survey of 3,000 parents, commissioned by the IOP.

With nearly 9,000 physics-related job vacancies in the UK in mid-2021, as revealed by our Workforce Skills Project, there are significant skills gaps at all levels.

Women are particularly under-represented in the physics community – but their talent, insights and perspectives are badly needed if society is to solve the challenges facing healthcare, the environment and the economy.

Find out more about the Eurekas.